“Can God furnish a table in the wilderness?” (Psalms 78:19). My wife and I had the following opportunity to see this question answered in our own lives in a practical way.

It was August 28, 2011, and our village was being evacuated as a precaution against the approach of Hurricane Irene, a rare event in upstate New York, where we were then living. My wife was away at this time, and while driving north on my own I talked with firemen at a roadblock on the edge of town, who somberly told me they were expecting eight to ten feet of water right where our house was located.

I was stunned, and my first thought was one of concern for the well-being of our two cats, since I had left them inside with the door to the upstairs hallway closed. My second thought, however, was a verse attributed to Moses: “Behold, I send an Angel before thee, to keep thee in the way, and to bring thee into the place which I have prepared” (Exodus 23:20). This assurance, which God gave to the children of Israel during their travails in the wilderness, represented to me at that moment a promise that no matter how deep the waters of our earthly experience, God’s kingdom is intact. The divine Love that reigns over all was actively lifting us above any evidence of a destructive power opposed to the good that is God. This heavenly thought was Spirit’s immediate gift to me, and it was enough. It helped carry the day against the uncertainties crowding in. I drove on and spent the night with church friends.

The Schoharie Valley had never experienced such severe flooding in three hundred years. Our village and surrounding communities made the national news, and the President declared us a federal disaster area.

I was one of the first to get back into the village the next day. Debris was everywhere. Our house and belongings had been severely damaged, but the cats had survived: they had climbed curtains and spent the night on high. The water and mud, fish and frogs, had reached as high as the firemen had predicted, but not as high as our cats.

There were no tears; instead, strength and courage permeated our every thought.

The following day, my wife and I examined the house together and began the long process of moving the contents to the street and thoroughly gutting the interior. There were no tears; instead, strength and courage permeated our every thought. Any sense of sorrow or loss was completely forestalled by our understanding of this important truth stated in the Christian Science textbook, Science and Health with Key to the Scriptures by Mary Baker Eddy: “Substance is that which is eternal and incapable of discord and decay” (p. 468).

Soon after learning of the flood, my wife had called a Christian Science practitioner to pray with us. This dear person told her, “We’re going to expect good from unexpected places.” And it came! We and our neighbors felt the outpouring of love from the hearts of individuals and groups coming to offer assistance. Through their natural reflection of God’s goodness, people were giving their all to help erase any sense of suffering. My wife remarked that it was a privilege to see the countless strangers, young and old, reflecting this living goodness by rendering whatever assistance was required in the houses, churches, and businesses of our village. It reminded us of a definition of grace found in Strong’s Exhaustive Concordance of the Bible: “the divine influence upon the heart, and its reflection in the life” (Greek dictionary).

We met hundreds of men and women in the press of circumstances who appeared to be motivated only by the timeless, overpowering desire to love their neighbors as themselves. Their example brought this commandment to life in a vividly precious way, and I knew in my heart that our heavenly Father was blessing each one of them as certainly as they were blessing us and all those around us. Gratitude and affection became our daily companions, energizing us and others as our recognition of the tangible expression of God’s unending goodness and love slowly overcame the devastation of this catastrophic weather event.

Years earlier, when we had first applied for a mortgage for our house, we had been told flood insurance was not required. So we had none, and our homeowner’s insurance could not be drawn on for the type of damage sustained to our home. But when we made a trip to our insurance agent’s office to see about the car that had been damaged, the owner of the agency asked my wife how we were doing, and then proceeded to tell her that because we were not insured for flooding we could not expect any help from insurance. The agency’s phones were ringing constantly, and my wife felt sorry for the owner having to tell so many people in need that she could not help them. The owner’s comments to the callers included statements such as these: “You are not going to be made whole by insurance;” “No one will be made whole by insurance;” and, “Insurance does not make you whole.”

Our hearts were humbled, and we thank God every day for this profound expression of divine Love meeting the human need.

Although the woman was speaking of the limited capacity of insurance agencies to restore all the material possessions of the insured when these kinds of calamitous events occur, my wife considered the fundamental spiritual truth of these words. As Science and Health explains, “The so-called laws of matter and of medical science have never made mortals whole, harmonious, and immortal. Man is harmonious when governed by Soul” (p. 273).

Though we had lost almost everything in the way of material possessions, my wife recognized that our spiritual wholeness and dominion were intact and would forever remain so, because as God’s children, we were eternally maintained and sustained by Spirit, not matter. Our family and the members of our community were already spiritually whole, complete, and safe in the permanence of divine Love’s perfect spiritual creation—and would be forever. She realized that this was how we needed to pray about the situation. We needed to see the devastation not as a fixed fact, but as a material picture that must be rejected in favor of the spiritual facts: that God, good, is the only power and that man, made in God’s likeness, is perfectly cared for and supplied by the infinite spiritual resources of God, the Soul of all existence.

Without flood insurance, we didn’t have the wherewithal to completely replace what had been lost. But one day, without any warning, we received a call from someone with a client who was seeking to extend financial help to a family affected by the flood. Remembering the practitioner’s words, I wondered what good could possibly be more “unexpected” than this! But as I surveyed our neighbors carting all of their ruined earthly belongings to the street, I became convinced that there were many others who needed this unexpected aid more than we did. I knew that my wife and I, leaning on God’s infinite ability to sustain us, would be cared for no matter what the circumstances. So instead of accepting this offer of financial aid, I gave the caller the number of a local businessman who had contacts among members of the business community affected by the storm, and I thought no more about it. Three days later, however, the same individual called back, saying that the business restoration need was beyond the scope of what the client could do, but that she still wanted to contribute to a family needing to rebuild. When asked this second time, we felt it was right to recognize this offer as part of the unfolding of good that we were striving to witness for our entire community, and we gratefully accepted.

It was this generous gift that enabled us to put our home back together again so that it was as comfortable as before the flood. And our neighbors, too, found the resources and opportunities they needed as—over the course of the next several years, with neighbors continuing to help neighbors as needed—we saw our community gradually regain all of its former charm and beauty. Our hearts were humbled, and we thank God every day for this profound expression of divine Love meeting the human need.

Home is where God dwells, Where joy and happiness abound; The atmosphere of love tellsHere unity and peace are found.Leta Bailey

The power that remains when the hurricane leaves

It’s been heartbreaking to see reports and videos of Atlantic hurricane Dorian’s devastating path. Such disasters lend themselves to feelings of helplessness, hopelessness, and despair.And yet, tho... 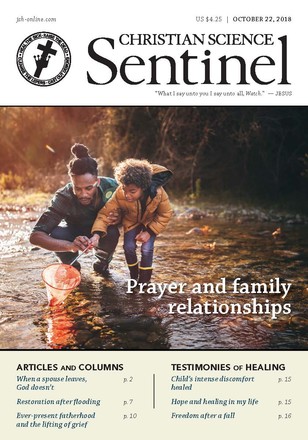 When a spouse leaves, God doesn’t

Ever-present fatherhood and the lifting of grief

Hope and healing in my life

Freedom after a fall