THE SARS THREAT IS HAVING DRASTIC ECONOMIC CONSEQUENCES in Southeast Asia, a region that relies heavily on the tourism industry. Severe quarantine restrictions, as well as the general fear of catching the virus, have been keeping travelers at home. Hong Kong's Cathay Pacific Airways has been forced to cancel 45 percent of its passengers flights, and there has been a similar impact on Australia's Qantas Airways. The downturn in passenger traffic has hurt the already fragile airline industry, and has in addition reduced the amount of revenue flowing into countries such as Singapore.

While the financial effect of SARS is serious, the overriding concern is for people's health and well-being. And, although the threat is widespread, I do not accept that we are helpless against it.

I've found it helpful in cases of contagion to rely on a spiritual approach to self-care and healing. This approach is described fully in Mary Baker Eddy's book Science and Health with Key to the Scriptures. In this empowering spiritual resource, the author shows how to stay healthy, explaining the connection between mind and body, and the relationship that exists between understanding one's spirituality and feeling safe and well.

Knowing there is a connection between what we think and what we experience is pivotal. "Many a hopeless case of disease," Mary Baker Eddy wrote, "is induced by a single post mortem examination,—not from infection nor from contact with material virus, but from the fear of the disease and from the image brought before the mind; it is a mental state, which is afterwards outlined on the body" (Science and Health, p. 196). This clearly explains that contagion is fundamentally mental in nature rather than physical, and is engendered by fear. I've found that understanding the mental nature of contagion is a vital step in finding the protection and healing that prayer brings to our lives.

One day, for example, a close friend called me. She was suffering with a bad case of Asian flu. She described the symptoms in great detail and told me how sick she was. At first I listened and was sympathetic. But as the conversation progressed, I became more and more troubled. I thought, "Oh dear, I hope I don't catch this and suffer like her!" By the time I put the phone down, I was quite afraid of this contagious disease.

Within 30 minutes of that conversation, I began to have the same alarming symptoms. I was dismayed and confused. "How could this happen?" I asked myself. "I haven't been near her or anyone with this condition!"

I decided to pray: "Father, help me. I don't want to be sick. What do I need to understand to be well?" At that point, I recalled ideas from this passage from Science and Health: "Disease arises, like other mental conditions, from association. Since it is a law of mortal mind that certain diseases should be regarded as contagious, this law obtains credit through association,—calling up the fear that creates the image of disease and its consequent manifestation in the body.

"This fact in metaphysics is illustrated by the following incident: A man was made to believe that he occupied a bed where a cholera patient had died. Immediately the symptoms of this disease appeared, and the man died. The fact was, that he had not caught the cholera by material contact, because no cholera patient had been in that bed" (p. 154).

This illustration was revealing. As I thought about it, I saw that I had unwittingly associated, or identified, myself with my sick friend and her suffering. I'd accepted the conclusions that (1) This disease existed; (2) It was contagious; (3) She'd caught it; (4) I could catch it, too. Subsequently, I'd become afraid of the disease and of my becoming sick with it. As a consequence, I'd allowed myself to become "mentally infected" by the fear of contagion. Understanding this set me on the road to recovery. It led me to take the next step—mastering the fear of contagious disease. Based on the Biblical facts of existence that Christian Science explains, my conclusions about my friend's illness needed revision along these lines: (1) Disease has no life, because God is good and made all; (2) Contagion is not a part of God's perfect creation; (3) My friend could not be subject to anything but God's good power; (4) Neither could I.

To gain the upper hand over my fears, I prayed with this idea from Science and Health: "Fear, which is an element of all disease, must be cast out to readjust the balance for God" (p. 392). Soon I was reasoning in this way: "Divine Love is with me. I have nothing to fear. God has made me well, and He keeps me that way. Fear is no part of the mentality God gives me. It can't occupy my thoughts. My true identity is spiritual, and perfectly healthy. I won't be influenced by fear. God has given me power over the fear of sickness. With God's help I can resist it. I can be fearless and free of disease all of the time." As I prayed like this, the symptoms I was experiencing vanished as quickly as they had appeared. In less than an hour, I was completely well.

While I was grateful for the sudden freedom from illness, the lesson I learned that day about the mental nature of disease has been the most valuable. I now know how to take charge of what I'm thinking, and thus of my health.

Now, whenever I hear of an outbreak of contagious disease such as SARS, or a flu epidemic, I take action. I watch to see how my thoughts are being influenced. I ask myself, Do I anticipate that I will remain healthy? Or do I believe that I might catch the latest sickness going around? I pay attention to what I'm letting myself think in regard to my health and well-being. I refuse to believe that I can be susceptible to disease. I pray not to let my thoughts be overwhelmed by fear and images of illness.

This spiritual approach to selfcare and healing works. Over the years, putting it into practice has helped me stay free of fear and be well. I'm finding it useful right now in the current situation as a defense against SARS. Because God is taking care of us, we really can expect to be safe. I believe that through prayer anyone can eliminate the fear of disease and begin to experience better health and more constant peace.

This spiritual system of protection and healing can be put into practice at any time, anywhere, because it is based on God's presence and power, which are unlimited and impartial. It is closer than breath itself to every one of us. It is as near as our next prayerful thought. 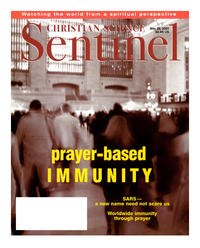