When
confronting some difficulty that seems overwhelming, have you ever found that laughter can bring a perspective that leads you to what can disarm evil and heal? Instead of trudging along soberly, laboring predictably, we might remember a little humor can help us see things from a standpoint that quickly melts what appears to be towering over us and crushing our joy.

Of course, laughter alone doesn't have the power to heal spiritually or to redeem. Yet what laughter can represent of the joy of Soul, of God, is powerful. It can break through hypnotic, fraudulent claims of power in evil and help us recognize more of the perfect nature of God's creation. Evil doesn't seem so ominous when we look at things from God's perspective, so to speak. In fact, to God, infinite good, evil isn't power at all. It isn't even an entity. One of the Bible's psalms begins, "Deliver me from mine enemies, O my God: defend me from them that rise up against me." Something a few verses later answers the fear behind those requests: "Thou, O Lord, shalt laugh at them; thou shalt have all the heathen in derision" (59:1, 8).

It's good to know that God is "laughing" at our enemies—whether they be sickness, injustice, sin, or even mortality. Knowing this, knowing the powerlessness of a perceived threat because God is the only power, we'll be able to respond with dominion. If God isn't threatened by sin, disease, or mortality, it is well for us to recognize more and more each day our exemption from these evils. Freedom and healing come when fear dissolves.

I'll tell a story on myself to illustrate this point. When I was in college, one year I came home for the Christmas—New Year's Day break. One of my old friends called and asked if I'd like to go out dancing with a large group on New Year's Eve. I said that sounded great. "Oh, by the way," he said just before he hung up the phone, "this will be like a blind date—there's a girl coming who we've set you up with." "Sure, fine," I answered.

Well, we all met at his house and then left together to go dancing. I was introduced to that girl and sat next to her in the car. I tried to talk a little with her, but I could see that she was sort of shy. I kept trying, although she didn't even look at me. Even after we arrived and started dancing I could tell she was uncomfortable. So I really went out of my way to take care of her and always stay right near her.

Soon everyone was having fun at this New Year's Eve party. Gradually this girl started smiling, having a great time, and talking and laughing with almost everyone. It got pretty crazy out there on the dance floor as it got closer to midnight. I used to be able to do a standing back flip. I'd leap in the air, tuck in my knees, flip over backward, and land back on my feet. I did a couple of those, and even my date thought it was funny. The third time I tried it, I landed on a place on the floor where someone had spilled something. I never even got my hands out to stop my fall. The first thing to hit was my nose—and it broke.

I stood up, and because I didn't want to leave that shy girl alone on the dance floor, I just kept dancing. My nose was crooked and bleeding, but I just sort of smiled and blinked the water out of my eyes, trying to hear the music.

The next day I woke up wanting to pray for myself but wondering how to. I was in pain and feeling remorse for doing something as stupid as breaking my nose on a dance floor, yet I knew that I could never be beyond the help that prayer could give me. As I thought about God's allness, and of how His law of perfection for man is above and, in fact, completely supersedes the physics of noses and dance floors, I started to laugh. I could still see the startled look on that poor girl's face as I continued to dance after falling. Her mouth wouldn't close, and she became more and more bewildered—and quiet—on the way home. I could tell she was thinking, "I will never go on a blind date again!"

The whole thing amused me so much that, after praying along the lines I mentioned above, I found I wasn't impressed by the material scene or afraid of it. God's allness was so clear and real that I found I could laugh at what I believed confronted me. That very evening my nose was straight again. By the next day the soreness was gone, and there never was any bruising. No, I never saw that girl again, and, to this day, she's probably still hoping that she'll never run into me.

Obviously, not all kinds of laughter lead to a higher perspective, and there are many situations when humor isn't appropriate. When emotions, including laughter, are misguided, when they are mean-spirited or destructively critical, for example, nothing productive results. In Mary Baker Eddy's Retrospection and Introspection she says, "If beset with misguided emotions, we shall be stranded on the quicksands of worldly commotion, and practically come short of the wisdom requisite for teaching and demonstrating the victory over self and sin" (p. 79).

Spiritual joy helps us to hold guard over the expression of divine Life in our lives. It's harder for the world to get our goat, burdens don't seem so heavy, and disease doesn't seem so powerful when we can laugh at them from the perspective of God's omnipotence.

Once, in a very serious situation, George Burns leaned over to Jack Benny and whispered, "Remember, don't laugh." Milt Josefsberg, The Jack Benny Show (New Rochelle: Arlington House Publishers, 1977), p. 234. As you can imagine, Mr. Benny began laughing and couldn't stop—much to his embarrassment. Things all over the world are very serious today. That goes without saying. Yet, we could all have more fun. Humor can be the very thing that helps to bring a higher perspective—a perspective that can be a catalyst leading to the healing and regeneration everyone is asking for. 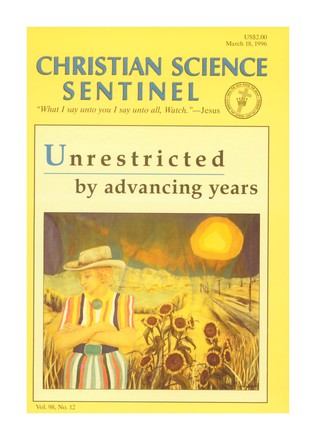 Not too long ago, The New York Times printed a front-page article...

Free from the limitations of age

By Russ Gerber with contributions from David C. Driver | March 1996

The day of Spirit

Sometimes we take ourselves too seriously

Deadlock? Not in divine Mind

The right and the wrong image

Throughout my life I had had many physical healings by relying...

One day, a few weeks before our first baby was born, I was...

I would like to express my gratitude for the healing truths expressed...