"Five, Four, Three, Two, One, Liftoff, Liftoff of STS-8, on The First Night Launch Of The Space Shuttle." With these words from Mission Control, I began my first adventure into space.

It was dark at 2:30 a.m. But as the solid rocket boosters ignited and the Space Shuttle Challenger lifted off, the night sky seemed to turn into day. The two rocket boosters plus three shuttle rocket engines thrust us upward. Inside the shuttle, we were hanging upside down, being bounced around in what felt like a fast and noisy elevator. No wonder it sounded so loud and felt so fast. In just two minutes, we were traveling three times the speed of sound and were already 22 miles above the ground! It takes a passenger airplane over ten minutes just to reach five miles above ground.

Suddenly, the ride became smooth and quiet as the shuttle released the solid rocket boosters, and we surged forward to 18,000 miles an hour on the three main rocket engines. As the engines propelled us even further into orbit, we were pressed against our seats with the force of three G's—or three times our body weight on earth. We certainly couldn't move around much under all that pressure. But I could move my head enough to look out the window. We were hurtling across the Atlantic Ocean just in time to see the sun peek out from behind the earth and light up the African continent with the rays of dawn. In a wide arc, the sun touched down on the tan of the deserts and the greens of the grasslands and the forests. This was a unique and spectacular view.

Once at our final altitude of 180 miles above Earth and cruising at 18,000 miles per hour, we shut off the engines and jettisoned the main engines' fuel tank. To reach our final orbit, we flew halfway around the earth and then lit two small shuttle engines for two minutes. This put us in our final orbit. We had made it!

jettison: to get rid of, or to release.

thrust: the push forward that the shuttle receives because of the gases escaping from its rocket engines.

deploy: to place something in a particular location.

Unstrapping my seatbelt, I coasted through the shuttle compartment. In orbit, there is no gravity, so people and objects have no weight and are free to float. You have to tie things down or fasten equipment to the walls and ceilings with Velcro to keep them from floating away. In orbit, everything seems to have Velcro on it.

This was my first time in "Zero-G," as it is called (zero gravity), and it was a strange and delightful experience. I found myself bobbing around the cockpit, like a beach ball floating on the water. I felt clumsy at first, and it took me a little while to learn to float where I wanted to go. It didn't take long to learn that all you need to do is to push very gently off the walls and ceilings. Since you can float comfortably around the shuttle, you don't have to wear your helmets or your boots—just thick socks to keep your toes warm.

"We, as its inhabitants, as one people of God, must share this planet together and act in the best interest of all who live here."—Dr. Guion S. Bluford, Jr., was the first African American astronaut in space. His first flight was on the Space Shuttle Challenger (STS—8) in 1983. After that, he went on three more flights, the last one in 1992. Altogether, he has spent 688 hours in space.

In space, some things are the same as on Earth. We eat three times a day and have a bedtime. But we go about eating and sleeping much differently from what we do here on Earth.

Since the shuttle doesn't have a refrigerator, all of our food is freeze-dried, meaning dry and without water. In order to eat the food, we open the vacuum-sealed packages, add water, and sometimes heat them in a little stove. You even have to add water to your drinks. When the food is ready to eat, you have to make sure that neither it nor you float away. You strap yourself in and Velcro your food trays down, and dig in with a regular fork or spoon. The water that you added to the food makes it sticky enough that it won't float away while you're trying to eat it.

Sleeping on the shuttle is different, too. Since you're orbiting the Earth at 18,000 miles per hour, the sun rises every 90 minutes. That means that it's night for 45 minutes, then day for 45 minutes, then night again, and so on. You certainly don't sleep every time it's night on the shuttle. Instead, you sleep after you've been awake for about 16 hours. You slip on eye-shades to block out all the sunrises, and slide into sleeping bags which are Velcroed to the wall, or even the ceiling. In space, you don't need cushioning for your back or head. Zero-G is really comfortable.

While in space, we had an important mission to complete. We had to deploy a weather and communications satellite for India, called INSAT-1B. That means we had carried the satellite up into orbit with us, and we needed to set it into its proper orbit. We had to go through a lot of procedures before we could finally open the cargo bay and release the satellite. After we were a safe distance away, the satellite's boosters propelled it to its orbit at 22,000 miles above the earth. It was ready to help India communicate. Sometimes it was hard to concentrate on my duties because it was my first time seeing such beautiful views of Earth. When we were flying upside down, we could peer through the Shuttle's large windows over thousand-mile stretches of the Earth.

From space, the horizon doesn't look flat, but curved in a gentle arc. You can see the slopes of mountains, the stretches of fields and cities, the vastness of the oceans. Swirling above the earth are great mats of clouds, like comforters over a bed. With a pair of binoculars, you can see the Great Wall of China and other man-made features When you're passing through night, you can clearly see the dots of millions of stars above and of city lights below. Everything you see is so vast and impressive.

After six days in orbit, it was time to return to this home. Again, we put on our protective space suits and helmets and made the final preparation to return to Earth. We flew backwards through space, and then forward through the Earth's atmosphere. Then we descended in a fast, fiery glow. In a smooth, quiet arc, we passed Australia, then Hawaii, then Los Angeles, as we fell toward the Earth. Gracefully we slowed down to just below the speed of sound as we neared our destination at Edwards Air Force Base in California. After one pass over the top of the base, we curved around to make our final descent. Although the shuttle has no lights, we were guided safely to the ground by the lights along the sides of the runway. We touched down gently at 12:45 a.m. We had just completed the first night landing of a space shuttle! As we disembarked, I knew that I wanted to fly again.

Alan Shepard, the first American to fly in space and one of only 12 humans who walked on the Moon, shared this advice with his daughters: "Take the word impossible out of your vocabulary."

Soaring far above Earth makes you realize how precious our planet really is. From up there, the Earth looks just like a small blue marble in space. You don't see any divisions of peoples and nations. What we did see was pollution from the burning of the forests in the Amazon and on a later flight the Kuwaiti oil fires (this was during the Gulf War in 1991). It made us realize how important it is that we all take care of our planet. We, as its inhabitants, as one people of God, must share this planet together and act in the best interest of all who live here. We must be good neighbors for those we share this planet with, as well as for future generations. 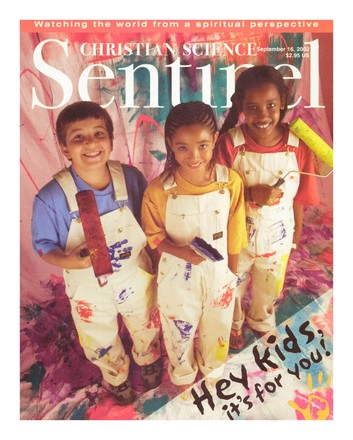 My first flight into space

What would YOU do?

On the right side

Celebrating love and family with snapshots and poems from you

For a kid who loves bugs

Jesus did—so can you

A healing that I had

I found the lens

I kept getting pulled under by the waves

Healed a long way from home

How your Muslim friends celebrate Ramadan