“The earth is the Lord’s”

Acknowledging God’s governance gives us the capacity to see God’s work in our own.

National crises sometimes bring with them unexpected positive experiences. They can be a catalyst for cooperation, unselfishness, and national unity. Awe-inspiring acts of courage and spontaneous demonstrations of selflessness can spring up in the midst of extreme circumstances. And these events can inspire a renewed sense of oneness that may have been dormant, just waiting to be rekindled.

One of the most beautiful things I have witnessed at a time of global conflict is the world uniting in prayer. While no two prayers are alike, the motive is the same—turning to a higher power for guidance and help. Our prayers for the world can be greatly supported by the inspired words of the Psalmist, who declared, “The earth is the Lord’s, and the fulness thereof” (Psalms 24:1). Acknowledging this places every nation under the protecting wing of the Almighty, whose reign can never be threatened or deposed, for as a hymn I love says, “His kingdom is forever” (Frederic W. Root, Christian Science Hymnal, No. 10).

When a crisis arises, I feel it is my responsibility to fervently and consciously acknowledge God’s government and control and to refute any suggestions of a competing government or force. When we act on the inspiration that comes to us from this enlightened and humble sense, our prayers and actions are imbued with a power that exceeds mere human effort. We glimpse the reality that we exist to express God’s divine wisdom, and this knowledge expands our ability to bless human affairs.

We need look no further than the Bible for proof of this. There we read that the most powerful man in the world at the time, the pharaoh of Egypt, was powerless to stop the Exodus of the unarmed Israelites; that Gideon’s band of three hundred soundly defeated an attacking army of more than a hundred thousand; and that one man, Elisha, peacefully neutralized an entire military force. Hezekiah, who relied on God when facing powerful foes, explained his dominion over those would-be invaders with a statement that echoes down through the ages: “With him is an arm of flesh; but with us is the Lord our God to help us, and to fight our battles” (II Chronicles 32:8).

The Psalmist’s words “The earth is the Lord’s” mean much more than God taking up arms on a battlefield. It is a striking acknowledgment that the universe is not a physical creation at all, but a spiritual one. It would defy logic to believe that God, Spirit, who is Love itself, could create a material universe that could succumb to violence, destruction, and hatred. Mary Baker Eddy, the Discoverer of Christian Science, makes this point when she writes: “The Scripture pronounces all that God made ‘good;’ therefore if evil exists, it exists without God. But this is impossible in reality, for He made all ‘that was made’ ” (The First Church of Christ, Scientist, and Miscellany, p. 178).

The objects of God’s creation are ideas. Ideas are mental, not material. They cannot be lost, divided, or taken away. Our limited understanding of Spirit may not allow us to see this perfectly, but that does not change the fact that the earth is indestructible, and all things therein are indivisible ideas created by, belonging to, and controlled by God.

A nation or country, therefore, is an idea, or more precisely, a collection of ideas. These ideas include democracy, freedom of speech, freedom of religion, equality, equal opportunity, and diversity. These ideas cannot be owned, suspended, or suppressed. Because they are God-derived, they exist in perpetuity and are not subject to the shifting and self-destructive vagaries of partisanship and personal power. Spiritual ideas triumph over all human machinations because they are expressions of the one infinite Mind, God, who reigns unopposed. God’s very existence is the assurance that His ideas can never be destroyed.

Acknowledging God’s governance and striving to yield to His will give us the capacity to see God’s work in our own. Jehoshaphat, king of Judah, faced an ominous threat from an alliance of enemies (see II Chronicles 20:1–23). Realizing his own inadequacies, he reached out to God in deepest humility and said, “We have no might against this great company that cometh against us; neither know we what to do: but our eyes are upon thee.” His utter denial of faith in physical means, including his own ability, opened the door of his consciousness to witness what was always there—God’s supremacy and authority over the suggestion of any opposition to His governance. As an idea, an expression of freedom from tyranny, idolatry, and pagan worship, Judah was removed from the threat of human dominance or destruction. This allowed him to hear God’s answer: “Be not afraid nor dismayed by reason of this great multitude; for the battle is not yours, but God’s.”

Seeing a nation essentially as a mental concept presents an opportunity to actively contribute to its defense. It doesn’t matter where we physically reside. The first line of defense is not on a physical battlefield but in our own consciousness. We can affirm in prayer the source, permanence, and indestructibility of the ideas that appear to be under siege. This is active defense, not passive. It is handling the threat right where it claims to exist—in thought.

Mentally affirming that the earth truly is the Lord’s, we will see how God’s allness precludes the possibility of an opposing center of power. This will guide us into the right defense of what is ultimately God’s, just as it did Moses, Elisha, Gideon, and Jesus. The form of that defense may seem entirely unconventional by the world’s standards, but it has a distinct advantage over all its perceived foes—it is omnipotent and therefore has no actual foes.

The immortal words of Psalm 91 are as applicable today as they were when they were written centuries ago: “Because thou hast made the Lord, which is my refuge, even the most High, thy habitation; there shall no evil befall thee, neither shall any plague come nigh thy dwelling. For he shall give his angels charge over thee, to keep thee in all thy ways” (verses 9–11).

When we surrender any sense of personal responsibility and commit ourselves to reflecting God’s government, we will begin to see evidence of this—even in the midst of turbulent times. 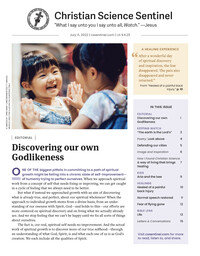