I've loved movies ever since I was a child. On Saturdays, my mom would drop my sisters and me off at a theater for the matinees I shared with hundreds of other kinds in town, always accompanied by popcorn or candy. As soon as the lights went down, I would be on that western prairie or in outer space with the characters on screen.

I'm the mom now, and these days my family looks forward to seeing the big summer movies together. This summer's big "kid" movie, Spy Kids 3-D: Game Over, has many of the very elements—3-D projection, adventure, suspense, heroism, good guys and bad guys—that used to get me so far into the story that I forgot I was sitting in an air-conditioned theater.

Juni Cortez, Spy Kids' littlest Cortez, has all the characteristics of a classic hero. But for me, the qualities Juni has in spades—honesty, wisdom, intelligence, and humor—have a spiritual source. At first, Juni is afraid he'll fail. He has enough confidence and wisdom, though, to ask his grandfather to be his partner in a video game in which he must rescue his sister.

Elizabeth Avellan is the film's executive producer, and is married to Robert Rodriguez, the award-winning director known for his clever and frugal approach to filmmaking. Elizabeth is partly responsible for the content of the Spy Kids series, and is someone who's found her spiritual purpose within the film business, not in spite of it.

She's a mom of three charming sons, who has a warm manner and a ready laugh. Everyone around her remembers the imprint of the wonderful hugs she gives. When I talked with Elizabeth's staff members about their work with her, the respect and love they feel for her shone clearly. It's not the kind of thing one often hears about a high-powered executive in the film business.

This past spring, I met Elizabeth at a Starbucks located halfway between her home and work. One point recurred often during our conversation: the fact that she regularly talks with God regarding her business and personal decisions. A few years ago, Elizabeth found herself unsure of what business she should be in after Robert made his name with El Mariachi, his first widely recognized independent film.

She said she had a month-long discussion with God regarding her next steps. From that conversation she got a glimmer: She was supposed to work with Robert in the movie business. "I began to pray and fast for 30 days because I wanted to know the answer. I asked [God], 'I want to know if You want me to do this, and I want to know why.' I got the 'Yes, you're supposed to do this,' but I never got the why ... until we began to work with the first movie, Desperado."

Desperado is a "shoot-em-up" film for mature audiences. The desperado of the title is a mariachi musician bent on revenge. His girlfriend was killed by bad guys. There are wild, improbable gunfights, a beautiful maiden, a handsome desperado, a very bad villain, and a lot of unsavory men and women.

Elizabeth describes the film culture as sometimes "crazy" and "promiscuous." For some time, she wasn't sure why she had gotten the answer that this crazy business was where she belongs.

Then came the last five days of the Desperado shoot. Those few days clarified her mission in making films. "I was just finding my way. These women [in the cast] were all dancers in bars. They'd been damaged and hurt. They had worked for really awful people. They came to me and said, 'Why are you the way you are?' And I got to help them. That was when I realized what my life was going to be about. I know that's why God has me in this business. People say, 'There's something really different about you. What is it?' And you know what the answer always is? It's God. It's God in my heart.

That's the sort of trajectory I'm on."

As her work producing films goes on, Elizabeth continues to listen for God's directions. At one time, she and her husband were working on a movie deal with a major Hollywood director, someone her husband respected and wanted to work with. "Always, I always pray about the movies before we do them," she says.

"We did all the meetings, did all the planning, got all the locations, and in my heart of hearts I knew God didn't want us to do that movie. I just kept ... saying, 'God, it's going to come to a point where this thing is not gonna happen.' "

"People say, 'There's something really different about you. What is it?' It's God in my heart."

Elizabeth explained that they arrived at that point when they either had to commit to the film or not do it and take care of a family member. "Sure enough, Robert and his agent came [to me], and the agent said, 'What are we going to do?' And Robert said, 'Ask Elizabeth.' His agent asked me, and I said, 'We're not doing it.' He looked at Robert and Robert said, 'There you go.' "

Elizabeth tells me that the Spy Kids movies are an offshoot of another spiritual element that is most important to her. "Spy Kids—it's about family. Robert and I come from big families. We lived the sibling rivalry, yet you have to stick together—he has abilities you don't have, she has abilities you don't have. My mother explained it this way: 'Love your neighbor as yourself. Your first neighbor is in the bed next to you.' Is it your wife? Is it your sister? My mom always said, 'You can't go out and be nice unless you love each other first.' That's the concept that Spy Kids expands on."

She points out that in the film, Carmen and Juni Cortez learn this same basic lesson of Christianity. "They need to be good to each other before they can be good to the other kids, who [have been] nasty to them, and win them over. [Spy Kids illustrates] that good will always overcome evil, that people can change and be good, or try to be good even though they were evil in the last movie. You have to become like children."

For me, that means that we all—parents and children—need the childlikeness that enables us to feel God's mothering love and fathering protection.

Films affect so many of us, our children, our neighbor's children, and people around the world. They are our common links and language.

It does my own "mama heart" good to think such spiritually generous and sincere individuals as Elizabeth Avellan are making films, and, along the way, are helping others in the industry to find and value their God-given nature.

Kate Dearborn and her husband, Tim, along with their ten-year-old, daughter Taylor, have seen Spy Kids I, II, and 3-D. 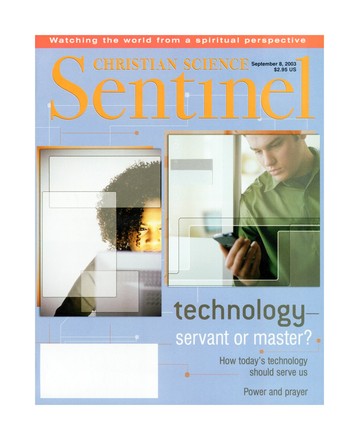 How today's technology should serve us

Something better to depend on

I found my place in God's 'infinite symphony'

'Why God has me in this business'

a change in thought brings freedom from addiction

Bend it toward God

You can be sure

Pause to remember, move toward freedom

We invite readers to submit testimonies...