There is a question of "supply" which seems to confront many branch churches when it comes to the choice of those who shall fill the important office of Readers, and within the last few weeks there have come to us from various parts of the field requests to "say something in the Sentinel" on this particular phase of the problem. Inasmuch as these requests have their origin in an earnest desire to be loyal to the teachings of Christian Science, we venture to repeat, at the risk of wearying some of our readers who are fortunate enough to be exempt from this particular difficulty, an editorial dealing with this question that first appeared in these columns several years ago, but which is equally applicable today. It is as follows:—

"We are informed that some of the smaller churches, when electing new Readers, have been impressed with a lack of available material within their own ranks, and have felt compelled to draw upon other fields, a condition that should not exist after three years of active public work. The principal lesson to be drawn from this seeming lack of material is that there is need of more specific as well as more general preparation for every branch of Christian Science work. While the healing of the sick is the most important and convincing evidence of the truth of Christian Science, there is other work which must be performed by those who have the welfare of our cause at heart.

"Christian Scientists, in these early days of denominational growth and expansion, should realize that the call, "Follow me, and I will make you fishers of men." may come to them at any moment, and they should be prepared for it. No matter how small in membership a church may be, nor how limited the experience of its members in public affairs, it should have within itself material for all its needs. For the same reason that Christian Scientists should be ever ready to heal the sick, they should be ever ready to preach the gospel. Neither can be properly done without earnest preparation and diligent study. Those without training for public work of this character, should know that it is never too late to acquire the necessary preparation.

"Another phase of the question, which must be carefully considered, is the danger of creating within our ranks a certain class who would, in time, come to be looked upon as professional Readers. It does not seem that the establishment of such a class could be conducive to the growth of those comprising it, nor to the growth of the individuals who would be relieved thereby of the necessity of qualifying themselves for this work within their own field."

The key to this problem of a proper choice of Readers, as well as to all others that come to the Christian Scientist who is striving to be faithful to his sense of duty, is found in the answer which Mrs. Eddy gives in Science and Health (p. 495) to the question, "How can I progress most rapidly in the understanding of Christian Science?" Her answer, while brief, is full of food for reflection, especially the concrete statements at the beginning and close of the first paragraph; namely, "Study thoroughly the letter and imbibe the spirit.... You will learn that in Christian Science the first duty is to obey God, to have one Mind, and to love another as yourself."

It will be noted that Mrs. Eddy has not told us to be guided by the will or theory of some material personage, but that she rather turns us to Principle and points the way to the demonstration of the Principle and rule of Christian Science. In the clear and forceful statements here quoted is a summing up of what is iterated and reiterated on every page of Science and Health, the rule of life which she always practised and to which she invariably turned for the solution of every problem that came to her in her individual work. 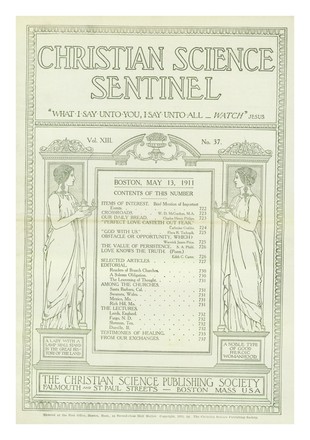 OBSTACLE OR OPPORTUNITY, WHICH?

THE VALUE OF PERSISTENCE

In the Preface to "Science and Health with Key to the Scriptures,"...

Mrs. Eddy rightly claimed to be a follower of Christ Jesus

Christian Scientists regard the work of Jesus and the...

The philosophy and theology of Christian Science are...

I wish my voice could reach every doctor in the land...

The Standard Dictionary gives this definition of Christian Science:...

In a recent sermon a clergyman is reported as saying that...

THE LEAVENING OF THOUGHT