One of my earliest Christian Science healings was of a skin condition that was all over my body. I don’t know what it would be called, but it was very obvious, and people were noticing it and expressing concern for me. Though I was embarrassed about the condition, I wasn’t afraid of it. In fact, I was really interested to see how it would be healed by Christian Science. I dug into prayer and study of the Bible and the writings of Mary Baker Eddy, looking at first for that one idea that would sort of “zap” the problem. It was a really purifying time, during which fears about so many things in my life were exposed and dissolved.

I spent long periods in deep study, just being alone with God and filled with inspiration. Gradually, my thoughts stopped orbiting around the physical problem and how to heal it. Instead, my whole consciousness was being drawn toward God and away from self-rumination. Many mornings, I would wake up feeling enveloped in the presence of divine Love, feeling the “peace of God, which passeth all understanding” (Philippians 4:7). In retrospect, I see that this divine presence was illustrating Mary Baker Eddy’s statement that “… the divine Mind makes perfect, acts upon the so-called human mind through truth, leads the human mind to relinquish all error, to find the divine Mind to be the only Mind, and the healer of sin, disease, death” (Science and Health with Key to the Scriptures, p. 251).

One day, I went into the bathroom and looked in the mirror. Another mark was appearing. Ugh! But I wasn’t alarmed. What came out of my mouth, almost as if someone else was saying it, was one word: a soft, gentle, absolutely final, “No.” I will never forget the feeling that followed. It was as if someone had just left the room and closed the door softly behind them. At that moment, in the stillness and silence, I had a sudden and complete awareness that this problem was over. I absolutely knew that it was over. And sure enough, during the next three days, all evidence of the skin condition vanished, much as shadows get shorter and then disappear as the sun rises overhead.

I learned a lot that day about spiritual healing. I learned that there’s no spiritual “silver bullet.” Truth is like the light, and just as light shines through the darkness and dispels it, Truth shines through the darkness of mortal beliefs and dispels fear. As we turn humbly to God’s love and care, and let fear be gently uncovered and removed, He guides us to whatever healing truths we need at the moment, and expresses them in us with dominion. True dominion doesn’t thrust and scream and shout; it doesn’t push and pull and force. It simply rests in the truth, and then a decisive “No” is enough to close the door on error. 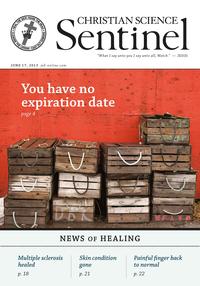