Growing up in a Christian Science Sunday School, I was especially fond of the account in the Old Testament where Samuel, lying in bed, was called by God (see I Samuel 3:1–10). Thinking it was the priest, Eli, calling, Samuel went to him three times. But Eli finally realized that the call was coming from God, and he told Samuel to respond and listen. I wondered what it was like to hear God so clearly.

Many years later I took up the sport of skydiving. During my second jump I went into a tumble just as my parachute was opening. My legs flew up, and my left leg became entangled in the shroud lines. Five or six lines were very tightly wrapped around my leg as the strain of the partially open chute pulled them taut. The chute itself was about two-thirds deployed, but the rate of descent was approximately seven times faster than normal, and I was dangling head first toward the ground.

With lightning speed I went through a checklist of options. I could release my reserve chute, but that would probably tangle. I could cut away the main chute, but the cords were too tight around my leg. It was absolutely impossible for me to bend my body to reach the lines with my hand. Jump school had never considered this as a possibility. My mental checklist was exhausted, and there was perhaps less than a minute before I would crash.

I had practiced Christian Science all my life up to this point and had the benefit of Christian Science Primary class instruction, so I had learned to start every day with prayer. I call it “establishing your day”—turning to God first thing in the morning. When we do this, our basic spiritual groundwork for the day has been laid, and we can quickly and confidently reject thoughts or suggestions that are clearly not from God.

I feel it was this daily spiritual preparation that enabled me to trustingly and unreservedly turn to Spirit in this situation, and immediately hear divine direction. Mentally I exclaimed, “Father, I need help!” Instantly, and I mean instantly, I heard: “Swing your right leg up, and with the heel of your boot unwrap the cords.” I immediately complied, and when I caught one cord with my heel, I was able to pull it around the trussed leg, and the chute opened more. As I unwrapped each cord, the chute opened fuller, and my descent slowed until the last line was off and I floated free in the normal position, touching down on the ground shortly thereafter with a picture-perfect landing.

That jump was over fifty years ago. It was an experience that I will never forget because of how distinct and clear God’s direction was to me. My life has been blessed over and over again by this fantastic religion Mary Baker Eddy brought to our attention. 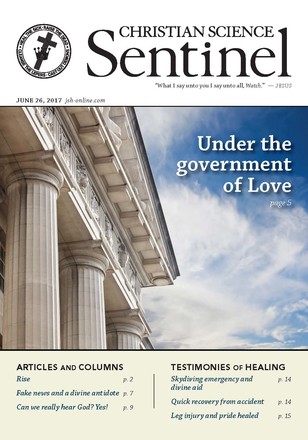 Under the government of Love

Fake news and a divine antidote

Can we really hear God? Yes!

By The Monitor’s Editorial Board | June 2017

Persistence fueled by hope and conviction

Are we opening our hearts to Christ’s persuasion?