Good wins every time.
Overcome evil with good.
Together we are strong.

You might be asking, where did those statements come from? Was it from some new, contemporary translation of the Bible? The answer is that these comments just poured out from the hearts of ordinary people. They were written on cards, marked on store windows, printed on caps and T-shirts by people in Boston at the time of the Marathon bombing.

Similar phenomena are occurring in response to terrorist attacks, shootings, and other dangerous situations around the world. In the United States, a high school teacher without a weapon tackles a shooter in the classroom as he reloads. In Paris, a twenty-two-year-old Malian immigrant spies a four-year-old child dangling from an apartment balcony five floors up. He scales the outside of the building with bare hands and saves the child while onlookers cheer. He says, “I didn’t think about it. I climbed up and God helped me.”

Passionate solidarity, love for good, and care about each other are rising up again and again in the midst of mindless evil and danger.

Why is that? Because people, at bottom, are good? But then why is that the case?

What if, instead of writing off these spurts of wondrous and inspiring good, we see something deeper about them—see that they could even be said to point to a scientific fact, the evidence of a universal principle? What if that principle is more significant than even what seems the basic impression of life—more capable of lifting us up out of our supposed mental and physical limits as human beings?

Well, in fact, that Principle is always there, always at work in us and everyone else, but we’re so preoccupied with a self and its history and likely future prospects, we often don’t notice until something truer gets our attention and takes over.  It’s then we realize that we’re part of something much larger—that whatever good we’re expressing isn’t our own possession, so to speak.  Therefore it’s not something we can lose through long, preoccupied periods of business-as-usual attitudes or spoil through persistent unworthiness. It may get temporarily obscured, but in fact it never goes away because behind it is universal Principle.

This was made apparent in the experience of a friend, who was overwhelmed by the passing of several people he worked with in his industry. They had died of drug overdoses. He then obtained a handgun with which to end his own life. He felt he couldn’t believe in God anymore because of what had happened. But nevertheless, he asked a Christian Science practitioner for treatment through prayer. Day by day he found himself going forward in spite of what seemed his own despair and loss of reason for living. He’d also fallen into taking the same drugs that had caused the death of his friends. But finally, he threw the gun into the ocean.

It was a new beginning, in a more radical sense than he at first realized. He changed careers, excelled in learning new skills, completely lost any drug dependence. And a new, powerful, and lasting sense of purpose in serving the Cause of Christian Science showed up in his life.

That sense of purpose was far greater than some psychologically recognized shift of mood or an attempt at positive thinking. It was, in fact, “finding himself,” as is sometimes said. Even more than that, it was finding his actual identity and that identity’s natural part in something larger—in the expression of the universal, divine Principle that is the source of good.

Expressing a love that isn’t just unselfish but is also unhampered by a mistaken personal sense of identity leads us to the real nature of humanity.

A passage in The First Church of Christ, Scientist, and Miscellany by Mary Baker Eddy, who discovered and founded Christian Science, spells it out: “As an active portion of one stupendous whole, goodness identifies man with universal good. Thus may each member of this church rise above the oft-repeated inquiry, What am I? to the scientific response: I am able to impart truth, health, and happiness, and this is my rock of salvation and my reason for existing" (p. 165).

Simply put, expressing a love that isn’t just unselfish but is also unhampered by a mistaken personal sense of identity leads us to the real nature of humanity, and of individual identity, too. The Bible’s been saying that for centuries, of course.

Job, in the Bible, after running into the disasters and evils of human experience, cried—and probably pretty literally—“My days are past, my purposes are broken off, even the thoughts of my heart” (Job 17:11). But he was finally, through persistent obedience to God, able not just to hear words about God but to “see,” or feel, the presence and comforting of God, good.

You could say Job felt what the prophet Isaiah wrote down: “The Lord of hosts hath sworn, saying, Surely as I have thought, so shall it come to pass; and as I have purposed, so shall it stand.... This is the purpose that is purposed upon the whole earth” (Isaiah 14:24, 26).

Recognizing this all-encompassing purpose of good, which we’ve glimpsed in the worst of human circumstances, we’re more apt to respond to the divine purpose that takes us forward, despite all the vivid “reasons” of a negative human outlook. With the help of Christian Science, we discover the untruth of the material sense of existence, and instead begin to get the true idea of God and His spiritual creation that Christ Jesus promised sets human beings free of all sorts of troubles, whether despair or sin or disease.

We find that not only do we naturally feel a greater love for others, but we’re also impelled by more joy and a sense of definite purpose beyond anything we might have thought we had. Each experience of healing makes this divine Principle, the Love that is God, more readily apparent. And it brings an eye-opening new understanding of what life is truly all about.

Allison W. Phinney
Member of the Christian Science Board of Directors 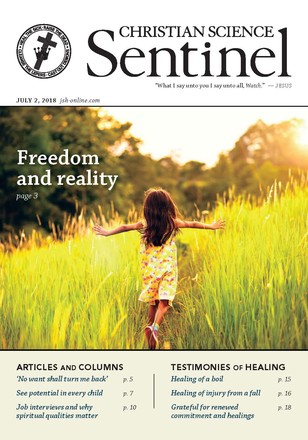 Why should anyone be interested in reading about metaphysical healing?

‘No want shall turn me back’

See potential in every child

‘Your life is going to change forever’

A healing lesson … from my cowgirl boots?

Healing of a boil

Healing of injury from a fall

Grateful for renewed commitment and healings

no mote or beam

The reason for existing