So begins a 1969 song by English rock band The Who, aptly titled “I’m free.” People in every corner of the globe yearn to feel, deep down, the truth of that in their lives. I can’t pretend to know what inspired those lyrics, but to me there’s something thought-provoking about linking “freedom” and “reality.” What if freedom truly is the reality, our natural state of being?

Sometimes freedom—perhaps from fear, illness, addiction, or some negative character trait—can seem unachievable. But Christian Science presents a different picture, one in which no one is ever destined for such imprisonment. We can take heart in the idea that we are made free by God. And not just made to be free someday, but free right now, at this very moment. Always. It’s how God created us.

That’s a pretty radical way to think about ourselves and each other. It often doesn’t square with what we’re seeing, feeling, or experiencing. It requires us to look beyond the surface and define ourselves not as vulnerable, irredeemable mortals, but as spiritual—the reflection of God, divine Spirit. When we’re open to this, we begin to see how powerful these ideas really are: We experience more of our God-given health, intelligence, and joy.

About a year ago, while away from home, I woke in the middle of the night feeling extremely ill. It was natural for me to turn to God, because I’d seen and experienced the effectiveness of prayer many times before. So I began praying, affirming that because God is limitless good, everything that He creates is good, too. Since we reflect God, anything that’s not good isn’t truly part of us. Our wholeness can’t be compromised.

Honestly, though, I was having a hard time focusing on prayer. The symptoms were distracting, and I felt very alone; even reaching my cellphone on the nightstand seemed an impossible task. So I just turned to God with all my heart, asking Him to help me see more clearly the Christ light that dispels darkness, illuminating spiritual reality and bringing healing wherever needed.

The idea came to me that I am held in divine Love, wrapped in Love’s infinite embrace … forever. I can’t even put into words how comforting this was right then! I began recalling some of the specific ways in which I’d recently felt and seen evidence of God’s love manifested in qualities such as nurturing, patience, compassion, and tenderness. Once I started recognizing these qualities, I couldn’t stop because there were so many.

Over and over, through the countless people he healed, Christ Jesus proved our inherent freedom as children of God.

And then I felt completely enveloped in divine Love. With that came a clear realization and conviction that as God’s child I could not possibly be ill because God, Love, is All. We can never for one second be separated from God’s goodness. In that moment the symptoms and discomfort that had seemed so overwhelming were gone. I fell asleep. The next morning I woke up feeling well rested and was ready for the day.

Over and over, through the countless people he healed, Christ Jesus proved our inherent freedom as children of God. One time, a group of men brought him a paralyzed man, carrying him on what the Bible refers to as a bed, or couch. They went so far as to bring him to the top of the house where Jesus was speaking and lower him down through the roof tiling, because there was such a crowd that they couldn’t get in the normal way (see Luke 5:18–26).

When Jesus saw this, he healed the man. The man got up, picked up his bed, and left, glorifying God as he went. He didn’t even have to go via the roof this time. The way was clear. His liberation was total and immediate.

There’s more. The man was freed in another way, too. The first thing Jesus said to him was, “Man, thy sins are forgiven thee.” The Bible doesn’t specify what those sins may have been, but we can imagine how freeing that must have been for the man. And it isn’t the only time that the Bible speaks of Jesus forgiving sins, opening the door for redemption and correction.

Underlying this and all of Christ Jesus’ healings was the spiritual reality, the fundamental truth of what we are as children of the Divine. It’s timeless, because God is eternal. It applies to everyone everywhere, because the tender care of God, divine Love itself, is boundless. The Christ, the divine nature Jesus exemplified, brings redemption and inspiration and healing to all who welcome God’s love into their hearts. The Apostle Paul put it this way: “Where the Spirit of the Lord is, there is liberty” (II Corinthians 3:17).

Now that’s a promise! And Paul knew what he was talking about. In fact, he himself was living proof of it. He had been released from an entrenched hatred he’d harbored—a hatred so intense that he’d brought about the capture and death of many followers of Jesus. When Paul, then called Saul, first glimpsed the Christ, it was so bright to his darkened thought that he was literally blinded. He was delivered from that blindness, and furthermore, his character was wholly transformed. His liberation was so complete that he became a new man with a new name and spent the rest of his life sharing and living what Jesus had taught. And later, he was freed in a most unusual manner from literal imprisonment for preaching Christ and healing (see Acts 16:16–35).

Whatever our prison may seem to be, it’s not impenetrable and we can be freed. Christ, Truth, can’t be kept out of the point of receptivity that dwells in every human heart. The Christian Science textbook, Science and Health with Key to the Scriptures by Mary Baker Eddy, explains: “The ‘still, small voice’ of scientific thought reaches over continent and ocean to the globe’s remotest bound. The inaudible voice of Truth is, to the human mind, ‘as when a lion roareth.’ It is heard in the desert and in dark places of fear” (p. 559).

We can trust in the reality of our God-given freedom. When we’re animated by a desire to better know God and to more fully understand our relation to Him, we’re empowered to prove something of spiritual reality in our lives and to rejoice, “I’m free!” 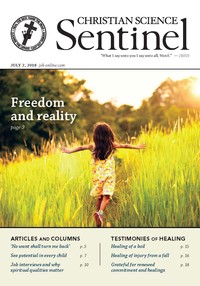