A higher basis for leadership

The quality of our own thoughts and actions is a significant influence on the quality of leadership in our world.

It's easy to feel good about leadership when thinking of some of history's great leaders, like Winston Churchill, Abraham Lincoln, or Mahatma Gandhi. But while some leaders are selfless and strong, others turn out to be venal and self-serving. As we approach the twenty-first century, are we destined to take potluck with regard to our leaders? Or is there a higher, more dependable basis for leadership?

Christian Science teaches that in all areas of human life, good can be found through a spiritual understanding of man's true nature, and political leadership is no exception. But to gain this understanding of man, we must first have a true concept of man's creator, God.

In the Bible, we read that God revealed Himself to Moses as "I AM THAT I AM" (Ex. 3:14). In order for God, the Divine Being, not to be self-divided and so self-destructive, He must consist exclusively of good and harmonious qualities, qualities such as goodness, love, and justice. And since God is infinite, He must include an endless number of these good attributes.

In order for the Divine Being to be self-existent, He must express Himself. And God does express Himself—through His spiritual idea, man. The fact that man is created in the likeness of God, Spirit, as the Bible tells us, means that the real individuality of each of us includes all the qualities of God. Thus, for example, man's true, spiritual nature expresses goodness and integrity because God is invariably good and upright. Man expresses ability because ability is a constant attribute of divine Being.

But if man's individuality is made up exclusively of good qualities, what about the evil in human personality? Evil would counterfeit the real man by making man mortal. But evil is the precise opposite of God, and of God's image and likeness, and therefore does not belong to anyone's real selfhood.

The Apostle Paul draws a clear distinction between the real man and the misconception of man as a mortal including both good and evil qualities. In his letter to the Ephesians, he refers to the "old man" and the "new man." The Moffat translation of a passage from this letter reads: "You must lay aside the old nature which belonged to your former course of life, that nature which crumbles to ruin under the passions of moral deceit, and be renewed in the spirit of your mind, putting on the new nature, that divine pattern which has been created in the upright and pious character of the Truth" (Eph. 4:22–24).

Establishing a more solid basis for leadership in our communities and nations requires not condemning any person but putting off our own old materialistic ways of thinking and acting, and putting on the "new man," the sense of man as the expression of Truth, God. This redeeming process involves mentally dropping selfishness, dishonesty, corruption, and so on, and allowing God-derived qualities such as integrity, faithfulness, and courage to hold sway completely. It's these Godlike attributes that always have constituted and always will constitute true leadership. Human leaders, at every political level and in every culture, are strong to the degree that they embody such qualities.

This is how this higher idea of leadership works in practice. Instead of looking for just the right person to lead our country, province, state, or community, we identify the qualities required, such as honesty, vision, moral courage, intelligence, and wisdom. We affirm the presence of these qualities as a natural expression of the divine nature in man. Then we actively watch for them, in ourselves and in those around us. This is a form of prayer.

As individuals affirm, and are increasingly faithful to, the reality of man as the expression of God, the inevitable outcome is a more genuine spirit of public service and better political decisions.

While it sometimes may not be easy to see the "new man" in those with whom we come into contact—whether family, friends, co-workers, or even ourselves—as we strive for this spiritual discernment, we help bring out these qualities in our world and in our political leaders. We become more expectant of seeing these attributes expressed by public officeholders, and if we live in a democratic country, we vote for the candidates who best exhibit these qualities. As individuals affirm, and are increasingly faithful to, the reality of man as the expression of God, the inevitable outcome is a more genuine spirit of public service and better political decisions.

When we pray for leadership, what gives our prayer power is our living in conformity with it. Thus, for example, if we really want to see more honesty and selflessness in national leaders, we'll strive to root out of our own thinking any elements of dishonesty and selfishness in our relations with others. Or if we're praying to see less partisanship in political parties, we'll work conscientiously to be more universal in our perspectives and more tolerant of viewpoints different from our own. Similarly, if our goal is less pettiness at the municipal level, we'll abandon any sense of small-mindedness in our own thought, on the basis that it is illegitimate and unacceptable because underived from God.

A verse in Isaiah prophesies the wolf being at peace withthe lamb, the leopard with the kid, and the calf with the young lion—a state of universal harmony. The verse continues, "And a little child shall lead them" (11:6). Couldn't this little child that leads be thought of as the "new man," the sense of each of us as childlike, pure, good, and true? Whenever anyone, be it a prime minister or simply a conscientious citizen, values and manifests these qualities, true leadership is expressed and the standard of leadership uplifted.

But is this higher idea of leadership really practical? Consider this statement by Czech Republic President Václav Havel, leader of the "velvet revolution" that overturned the communist regime in Czechoslovakia: "I favour politics as practical morality, as service to the truth, as essentially human and humanly measured care for our fellow humans. ... It is becoming evident that truth and morality can provide a new starting point for politics and can, even today, have an undeniable political power" (Václav Havel or Living in truth [London/Boston: Faber and Faber, 1986]). The ideas expressed in these words, written in 1984, and the acts that followed surely advanced political freedom in both the former Czechoslovakia and all Eastern Europe.

Of course, the greatest, indeed the perfect, example of leadership was Christ Jesus. His authority was expressed in his spirituality, his ethical living, and his healing works. Through the power of his pure spirituality he had an immediate reforming influence on the tax collector Zacchaeus (see Luke 19:1–10). Although Jesus held no public office, he fearlessly laid bare the hypocrisy of the institutions of his day, as shown in overturning the tables of the money-changers (see John 2:13–16). His actions pointed to spiritual Truth as the only dependable basis upon which to build human government. And although he contributed most powerfully to government through his prayers and his healing work, he also paid taxes, rendering "to Cæsar the things that are Cæsar's, and to God the things that are God's" (Mark 12:17). In every aspect of his life, Jesus's spirituality—his true leadership—shone clearly. As we follow him, each of us will express the qualities that we want to see in our leaders.

Mrs. Eddy, a faithful follower of Christ Jesus and herself a remarkable leader—the Leader of Christian Science—writes: "Beloved children, the world has need of you,—and more as children than as men and women: it needs your innocence, unselfishness, faithful affection, uncontaminated lives. ... What grander ambition is there than to maintain in yourselves what Jesus loved, and to know that your example, more than words, makes morals for mankind!" (Miscellaneous Writings, p. 110)

As we look around the world today, in our own local community or in distant lands, we see a pressing need for safe and effective leadership. That leadership is fully present now, found in a higher concept of man as God's perfect, spiritual offspring, expressing purity and integrity. Far beyond the fallibility of human personalities, this view of man helps to bring regeneration in our own lives and to make more evident in our leaders, through the power of Truth and Love, the qualities that equip them for selfless service to humanity. Here is a view of leadership that, if applied, cannot fail to promote mankind's progress during the closing years of this century and beyond.

What a vital role we all have in showing forth this higher concept of leadership and so leavening the whole world's view of what really constitutes power and authority. 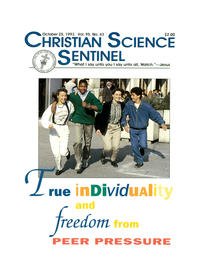