Ask someone to paint a picture of the drug and alcohol problem in the United States, and the images likely to be described are pictures of gang violence, drug-addicted children, and fugitive drug cartel leaders. This stereotypical portrait, while shedding light on a serious problem, presents only one facet of a complex issue. The problem of drugs and alcohol is much deeper and much more subtle than one might imagine.

There are millions of alcohol and drug users who have never been arrested, never lived in an inner city, and never even thought of using violence in their daily lives. To these people, drugs and alcohol do not take them across the boundaries of society into an underworld of despair. To them, a normal part of succeeding at life is the belief that escaping reality for a time is not only desirable but needed, and their only means of escape is seeking life and sensation in materiality.

I was one of those people. To me, happiness involved finding a new high or a new thrill and spending mindless hours hanging out with friends. Indeed, this was what the teachings of society and the perceptions of my life's experience had educated me to believe.

This unhappy perception of life was shaped by many events and worldly beliefs. A vicious parental breakup, which I wrongly took the blame for, persuaded me to believe that I was no good and didn't deserve or need anyone's help in living my life. If the divorce was my fault, then I must be a bad person not deserving of happiness. If my parents didn't need me and needed to fight over who would get stuck with me, then I didn't need them, or anyone else, either.

The pain of the parental breakup, the loneliness of not feeling understood, and the Madison Avenue influence and pressure of television, newspapers, radios, and billboards had all taught me that life was pain, and to overcome the effects of pain one needed material gain and the frequent ability to escape one's problems for a time.

In the context of this "education," God had come to mean absolutely nothing to me. He seemed without substance and incapable of helping me deal with life's problems. To me, God was something rarely thought about and never spoken of. God was for others, and the only time He came up in conversation was as a sidebar to the story of some fallen, hypocritical religious leader whose downfall had just been splashed across the headlines.

It's funny, though, because, I knew about God. As a child I had gone to a Christian Science Sunday School, and the first time that I really understood God as described in Christian Science, I instinctively knew it was right. In Christian Science, God is defined as "the great I am; the all-knowing, all-seeing, all-acting, all-wise, all-loving, and eternal; Principle; Mind; Soul; Spirit; Life; Truth; Love; all substance; intelligence."

These words are written in the Christian Science textbook, Science and Health with Key to the Scriptures by Mary Baker Eddy. Later, as I began to grasp the spiritual sense of those words, they forever ripped away, for me, the false covering of God as some corporeal, heroic mankind, who pardoned people at whim and forced his children to suffer painfully for faults or characteristics that he had created in them.

Mrs. Eddy, the Discoverer and Founder of Christian Science, illumined God and His spiritual creation, full of perfection and Love; a creation where each individual lives in harmony with each other, and a creation where pain is not the truth of being. This creation exists, not in some far-off, ethereal afterlife, but in the living, tangible "now." All that was needed to take advantage of this life in God was a right understanding of Him, a desire to follow Him in everything we do, and an honest effort in that pursuit.

How could I be "upright and Godlike" when I had so many horrible qualities and did so many wrong things?

I began to find myself drawn to these ideas more and more. They made sense. They shed needed light on unanswered questions about existence that lay in the dark recesses of my thought. I started to question meekly the widely accepted belief that pain was a real, necessary, and integral part of life.

For a time, though, my day-to-day experiences and the pressures coming from life seemed almost too strong. I would hear myself think, "Let others take advantage of a world where pain is questioned and overcome through hard work and a closer relationship to God." I would and could have no part of that, because there was one vital precept that I couldn't believe or agree with. And that was this idea written in the Christian Science textbook: "The great truth in the Science of being, that the real man was, is, and ever shall be perfect, is incontrovertible; for if man is the image, reflection, of God, he is neither inverted nor subverted, but upright and Godlike."

How could I be "upright and Godlike" when I had so many horrible qualities and did so many wrong things? No, for good people, these ideas about God, Life, and man might be true, but not for me. I would continue to struggle, live with pain, escape from reality, and believe in the acquiring of new and better things and new and better thrills as the source of happiness.

So, like many people, I continued to live and work without any conscious connection to God. I pursued happiness by trying new things, finding new thrills, and doing new drugs. I did this for quite a while, and maybe I could have lived that way for a long, long time if I had been different. Yet longer highs just became longer periods of emptiness and despair. The pain that I had numbed at first needed more and more drugs to silence it, and then I realized that no matter what I did, it was still there surrounding me like the eternal darkness of a great cave. I had no place to turn.

It was at this moment that a flicker of hope shone through the blackness. If God's spiritual creation consists of love, harmony, perfection, and goodness, wasn't that more desirable than the dark, barren, empty life in which I had cloaked myself? All that I had to do was take off my old garments and be willing to put on the new clothes that God had made for me and kept fresh. In other words, accept once and for all my spiritual identity as a child of God, perfect, upright, and worthy. It seemed the only way out, but just as before, that single precept still stood in my way.

Humility was the key that unlocked my prison. This is what happened. Through prayer, I saw that if God was truly all-knowing, and He created me as perfect and good, in all these years of not believing in myself as good I had been dishonoring Him and calling Him a liar. For the first time in my life, I allowed myself to entertain the idea that I was a perfect child of God, created to live in peace and serve Him. It was at this moment that my whole life irrevocably changed, and I was healed.

God had released my shackles and proceeded to feed and clothe me with His goodness, His truth, and His love. The supposed pain and anguish of the preceding years actually faded away into nothingness, and my true identity as a child and a servant of God shone through. This all happened despite my past and the way the world viewed me. My desire to do drugs left me, and all of my habits, dreams, and personal qualities gravitated to a higher expression—God's expression. Christ Jesus' words "It is the spirit that quickeneth; the flesh profiteth nothing" became very alive to me. I had found peace.

My story is not a special one. The trials and triumphs of my life closely mirror those of many others in society today. My experience illustrates the depth of the drug and alcohol problem in this world; but most of all, I hope my experience illumines for someone else the availability of God's very present help in overcoming these challenges. As Jesus commanded, "Let your light so shine before men, that they may see your good works, and glorify your Father which is in heaven."

This article is included in:
1994 - PAMPHLET

Addiction can be healed 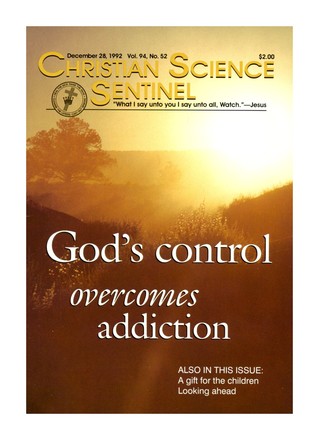 "My whole life was irrevocably changed"

Prayer for our church

"It's as though it never really happened to me"

Making progress: getting the nourishment we need

Gaining a better understanding of God

A gift for the children

One night I woke with severe stomach pain

Many years ago after first learning about Christian Science,...

I first drank alcohol in my freshman year in high school

Since my days in a Christian Science Sunday School, I have...