I was so excited to spend the second half of my junior year at a school on the beautiful coast of Maine. But three days after my arrival, I found myself dealing with a fever and sore throat, which prevented me from participating in activities. This was one of the few times I’d been away from my parents among people who didn’t know anything about Christian Science, and I felt very alone.

I knew it was time to turn to God for help, but while I did pray the way I’d learned in Christian Science Sunday School, it felt difficult to think clearly and stick to my prayers, because everyone around me was so afraid of getting sick. I was in touch with my parents by phone, and they contacted a Christian Science practitioner to pray for me as well. However, when I was still experiencing symptoms after a couple of days, my school required me to get tested at a local clinic.

Leading up to the tests, I was praying to calm my fear. This passage from the Bible helped: “Fear thou not; for I am with thee: be not dismayed; for I am thy God: I will strengthen thee; yea, I will help thee; yea, I will uphold thee with the right hand of my righteousness” (Isaiah 41:10). After praying with these ideas, I was able to feel God’s presence, which dissolved my fear. I felt calm during the visit to the doctor, and by the next day, the symptoms were nearly gone, and I was able to go back to my classes.

I was able to feel God’s presence, which dissolved my fear.

Unfortunately, the tests came back positive for mononucleosis, and I was told that I couldn’t participate in all the activities I wanted to, and also that I should expect to feel symptoms for six to eight weeks. After being somewhat frustrated with the school, I had another change in thought when I began focusing on being grateful rather than feeling resentful. I realized I could be grateful for my ongoing freedom from any physical symptoms, in spite of the diagnosis, and that I could even feel more kindness toward the nurses, who I knew were only doing what they thought was best for me and for the other students.

Each day over the next week, I read the weekly Bible Lesson (found in the Christian Science Quarterly) and Science and Health with Key to the Scriptures by Mary Baker Eddy. I also continued to pray both on my own and with my parents and the practitioner. Mentally, I had to consistently counteract others’ expectations that I would feel sick for a certain amount of time, and this idea helped me do that: “That mortal mind claims to govern every organ of the mortal body, we have overwhelming proof. But this so-called mind is a myth, and must by its own consent yield to Truth. It would wield the sceptre of a monarch, but it is powerless” (Science and Health, pp. 151–52). I realized that only God, good, has power over me—and nothing else does.

This healing gave me a lot more confidence in my ability to pray for myself.

The following week I was scheduled to go on a five-day, rigorous cross-country ski trip, and the nurses at my school were worried I wouldn’t be able to carry my pack or pull my sled. But I was eventually allowed to go on the trip, and I proved my freedom on the trail when I carried my backpack and the heaviest sled up the largest hill and when I led and broke trail one day. I completed these challenges with joy and was totally free of weakness or discomfort. That was the end of the issue, and when we returned, I was grateful to find that even the fears of those around me had faded away.

This healing proved to me the power of God’s presence. It also gave me a lot more confidence in Christian Science and my ability to pray for myself. I realized that even though I didn’t have any Christian Scientists with me, I really wasn’t alone. God, divine Love, was there the whole time. And now I know that I also won’t be alone no matter what challenge I face in the future. 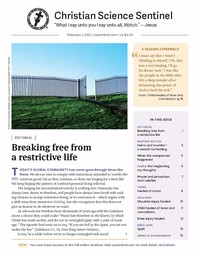