In order to realize true identity, one must have a single, spiritual point of view. Jesus' words, "If therefore thine eye be single, thy whole body shall be full of light," Matt. 6:22; bring this into focus. For every healing that has been accomplished through Christian Science someone has realized that there is only one divine Parent, the Father-Mother Love, and only one divine creation. This realization shows the light of the Christ dawning on human consciousness at the appearing of which the suggestion of dualism fades out.

Dualism is the doctrine that there are two antagonistic elements in the universe, good and evil, and that man consequently has two natures, a physical one and a spiritual one. This doctrine suggests two realities, two identities. One of these is purported to be a material creation, always needing something to be done to it to make it harmonious; the other a spiritual creation, usually considered as somewhere off in the distance, to appear at a later date.

Through Science we can see that there is not an abrupt moment when one creation suddenly stops and another, unknown and unfamiliar, begins. Fear of losing mortal identity with its seeming pleasures dissolves as spiritual identity becomes clear in consciousness, and aches and pains then disappear.

A matter sense of existence will continue as long as we cling to mortal thoughts. Mrs. Eddy makes this statement: "Science shows that what is termed matter is but the subjective state of what is termed by the author mortal mind." Science and Health, p. 114. The subjective state, or matter, is just as material as is the mortal state of thinking. There will be no sudden change. Only as mortal mind yields to spiritual identity will a change come about. Our concern need not be how to hold on to matter, but rather how to understand spiritual identity and thus let materialism naturally pass out of thought.

The dropping off of mortal belief has nothing whatever to do with death. The overcoming of a false sense of identity, a surrender to Truth and Love, brings a fuller sense of Life and will eventuate in ascension. This yielding to the one Mind is a gradual experience. However, lessening confidence in matter brings dominion over it right at the point where we are, and we begin to see something of spiritual identity.

Spiritual identity is eternal. Eternity is now. It appears through the timeless unfolding of the Christ in consciousness. Because eternity is spiritual, eternity is not found in materialism.

Identification with Spirit's nature is wholly apart from sickness, sin, fear of disease, or fear of death. There will not be found in God's nature, nor in His reflection, any hate, self-will, self-pity, egotism, or pride. These lightless thoughts are merely suggestions of the carnal mind which would blind us to the true picture of man. They cannot be actual characteristics, because they do not at anytime reflect the divine character. All forms of discord or imperfection, including those believed to be inherited are without law to sustain them because they are only suggestions of the absence of the one divine Mind and of Mind's perfect idea.

A spiritual idea is not a descendant of mortals. His relationship is with his Father-Mother Love. He inherits all good from Him. No suggestion of the carnal mind can ever change the divine fact.

Often people wonder how they can recognize their true identity. The question might be asked, "If matter isn't real, then what is real right now in my present experience?" Character is what is real —that which expresses the qualities of God—the true identity imaging forth God's nature right now. It is the only tangible, substantial evidence of identity which any of us have, ever have had, or ever will have. Then we must concern ourselves with true character. What we call character building is actually the revelation of our true spiritual identity which is God's loving, lovable, and loved idea. 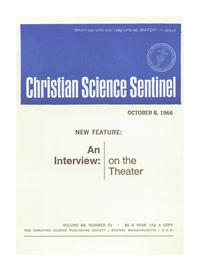