Thanksgiving time in the United States is a unique period. Visitors to the U.S. are often touched by the quiet but heartfelt gratitude expressed openly at this time. Many of them wish their own country had a similar event. It is not a commercial occasion; present-giving is generally not a feature; the glitz of consumerism does not touch it; children are not overindulged. Many families celebrate with a special meal as the country pauses to give God thanks for good received.

The deeper spiritual implications of thanksgiving may be found in the Scriptures. There were two occasions in the Bible that I like to think of, when Jesus gave thanks. In both cases, from a human point of view, there seemed to be little to give thanks for.

One was when there was an enormous crowd of people, about five thousand men and an unknown number of women and children, who had come to hear Christ Jesus preach. As the day wore on, they became hungry, but all that the disciples could find was a few loaves and a couple of small fish (see John 6:1—14). And it was in this almost impossible situation that Jesus gave thanks to God. His thought was not negative but affirmative—filled with gratitude for what he had. Over five thousand people benefited abundantly from his act of thanksgiving. John's Gospel says that they "filled twelve baskets with the fragments of the five barley loaves, which remained over and above unto them that had eaten" (6:13).

The second occasion was at the last supper, when it appeared that Jesus had very little about which to give thanks (see Matt. 26:20, 21, 26—28). He knew that he was about to face an unjust trial and the humiliation of public crucifixion. He and his disciples were quietly eating supper together, and what did he do? He took up the cup, a symbol of the persecution he experienced and the world's hatred of the Truth he lived and expressed—and gave thanks. Under similar circumstances, would we do the same? Is it not more common to complain under difficult situations? Does not thought often turn into selfish channels and ask, "Why me? What have I done wrong?" But the reason that Jesus was able to give thanks was that he was looking beyond the human scene to the divine facts.

Gratitude is really acknowledgment—very often the acknowledgment of something unseen. It is not just the giving of thanks for material things. It is the awareness of ever-present spiritual good, regardless of what the material senses may try to portray. It is seeing "the new heaven and new earth" in place of the old or material sense of heaven and earth. It is the consciousness that there "is no more sea"; no more tides of fear, beliefs of separation, or claims of mortal mind. It is rejoicing in the fact that "man is no longer regarded as a miserable sinner, but as the blessed child of God" (Science and Health with Key to the Scriptures, pp. 572—573).It is actually recognizing the presence of the kingdom of God as the only kingdom there is, and that we, and all mankind, live and move and have our being in it. It is the acceptance of divine Love's tender presence.

True gratitude is acknowledgment, awareness, acceptance of the abundance of man's infinite, invisible source of Life, God. It is recognizing and rejoicing in that which "eye hath not seen" (I Cor. 2:9).

Thanksgiving is a time to be a metaphysician, to see our lives in spiritual terms. As Mary Baker Eddy explains in Science and Health, "Metaphysics resolves things into thoughts, and exchanges the objects of sense for the ideas of Soul" (p. 269). Giving thanks for material things is a good human activity, but exchanging those things and objects, for ideas of Soul, is acknowledging true substance.

Gratitude purifies every aspect of our living because it is the recognition of constant good as the only true fact of life.

Fay Jones, recipient of the American Institute of Architects' 1990 Gold Medal Award for outstanding designs, said of his work, "The secret is bringing in symmetry, repetition, height, ascendancy. These are kind of the intangible things; they are not physical materials, but they're expressed with physical materials" (The Christian Science Monitor, March 6, 1990, pp. 10–11). We might take this point and apply it, not to building, but to gratitude. From this standpoint we can say that the highest sense of thanksgiving is recognizing the actuality of the "intangible things" of God, rather than dwelling on the "physical materials."

Mrs. Eddy, possibly the most original thinker of both this century and the last, and the Discoverer and Founder of Christian Science, laid great emphasis on gratitude. She ordained a special Thanksgiving Day service to be held in all Churches of Christ, Scientist, throughout the world—not just in the United States where the idea originated. Thanksgiving is service, a way of serving God. It echoes the joyous theme of the psalms in the Bible, where man is exhorted to praise God and His goodness in every avenue of life.

But Mrs. Eddy also writes in the Manual of The Mother Church, "Gratitude and love should abide in every heart each day of all the years" (Art. XVII, Sect. 2). How wonderful it is to recognize the constant flow of gratitude that comes as we let Love gently feed, nourish, and sustain us. Gratitude purifies every aspect of our living because it is the recognition of constant good as the only true fact of life.

Thanksgiving is a time for outward and upward thinking, for reaching out in love to others. Many people will find much to be grateful for; others may find it hard to think of anything good that has taken place in their lives, and feel discouraged. But making the effort to be grateful opens us up to the healing power of infinite Love.

How can this be true? There is an instructive little fable on this subject, which speaks of the "Devil's auction." At one time the devil was said to be going out of business. His tools would be for sale to anyone who would pay his price. On the night of the sale, they were all displayed—malice, envy, hatred, jealousy, sensualism, deceit, and all the other implements of evil. Separate from the rest lay a harmless-looking, wedge-shaped tool. It was much worn and priced higher than any of the others.

When someone asked the devil what it was, he said, "That's discouragement."

"Well; why do you have it priced so high?"

"Because," answered the devil, "it is more useful to me than any of the others because I can pry open and get inside a man's thought with that when I couldn't touch him in any other way. It is so worn because I use it with nearly everybody, as very few people yet know that it belongs to me."

"Is there anyone on whom you can't use it?"

The devil hesitated a long time and finally said in a low voice, "I can't use it in a grateful heart."

At the sale, the devil's price for discouragement was so high that it was never sold. The fable concludes, he still owns it, and he is still using it!

How wonderful to know our impregnable defense against discouragement is a grateful heart! Gratitude defeats discouragement because it disarms the devil of this much-used tool; light and darkness simply cannot dwell together. Worry is only ingratitude in advance! Conscious acknowledgment of good every moment keeps us from being worried or discouraged.

Gratitude and thanksgiving are man's natural attitude to life, because it is spiritual sense in action. God, divine Love, is constantly rejoicing in the beauty, harmony, and completeness of His own creation, and man, as reflection, is the inevitable expression of this rejoicing. God is the source of all activity; the reflection actually does nothing of itself. It just effortlessly is what the original expresses.

Thanksgiving is a moment-by-moment, daily event. As families and friends prepare for a special Thanksgiving Day, filled with gratitude and love, it is important to remember that whatever our circumstances, all are included in the one universal family, under the father-motherhood of God, and therefore are inseparable from His great love. Surely this is a cause for thanksgiving! 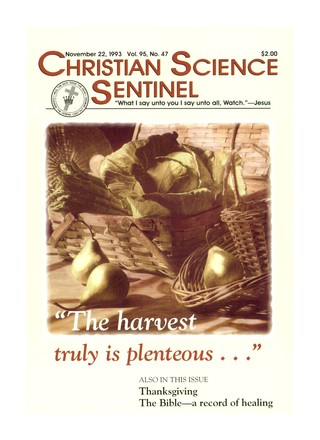 Cultivating the capacity for joy

The Bible—a record of healing

"The harvest truly is plenteous ..."*

Meetings on Science and Health begin in French-speaking Europe

The Bible: book of hope

The Ninth Commandment: a call for self-restraint

When I was introduced to Christian Science by a friend, I...

By Catherine June Sullivan with contributions from Joe Higgins | November 1993

Relying upon the healing power of God is the most deeply...

One morning I woke with severe pains in both knees