ERROR IS MERELY A FALSE REPORT

It is always a relief to find that the evil we thought was true and present with us was not really true at all. It was merely a false report. The fear we felt before, the despondency, and the heartaches then vanish instantly, for we see that there is no cause for them. This points in a limited and simple sort of way to a divine fact. Actually there is never a cause for evil of any kind, because God, good, is the only cause, and He does not and cannot cause His unlikeness.

In the light of Christian Science teaching, sickness, limitations, and inharmonies of any description are merely false reports, nothing more. The forever-present Christ, showing forth the divinely right idea of everything, is actually and truly present even where the inharmony appears to be. The inharmonious is not really present. It cannot be, because there is no place for it in omnipresent, all-harmonious Truth, or God.

The question then quite naturally presents itself: If I haven't as yet seen the falsity of the report, what do I do? One can see that, obviously, nothing inharmonious can be any part of the divinely right idea of everything. It is the Christ that constitutes the true being of man—of you and of me and of all. The Christ is the very substance, essence, and reality of one's true selfhood. The recognition, the full acceptance, of this divine fact is a law of complete annihilation to the lie.

Rather than try to beat life out of error when there is no reality there to destroy, we must accept the divine fact, the very presence of the fact, and reject the lie. Christian Science specifically teaches that one should defend himself against the suggestions of error. But although the unfailing result of right thinking as taught in Christian Science is defense, the act of defending is a battle, not with error as something, but with its false claim to be something, with error as nothing, as illusion. Our best defense is attack, not upon error as a reality, but upon its claim to reality. Error's attack upon us is an attempt to gain our consent, directly or indirectly, to its claim that it is something. Our attack upon it is upon error as an illusion, while all the time we are clinging steadfastly to God and His perfect idea.

These well-known words of our Leader, Mary Baker Eddy, on page 495 of "Science and Health with Key to the Scriptures" come often to thought with strength and great promise: "When the illusion of sickness or sin tempts you, cling steadfastly to God and His idea." The Christ, the ever-present, all-harmonious manifestation or perfect expression of God, when accepted in human consciousness, heals or destroys all that in any way misrepresents God and His perfect creation.

God has given man dominion. But this dominion is not demonstrated as that of a stronger power over a weaker. It is the dominion of Truth over error, good over evil, right over wrong. This dominion has the full support of God's law. But His law must be invoked with full faith in its availability and power. When the receptive thought is reached by Truth, healing results quickly. But there must be a readiness for the truth, an acceptance of Science, an acknowledgment that God's presence is the only presence. A false report cannot find acceptance in the consciousness aware of Truth's all-presence.

Almost everyone will readily recall the times that Christ Jesus asked those who came to him for healing if they believed he could do what was asked of him. One example is that of the two blind men, as told in the ninth chapter of Matthew. The record reads (verses 28-30): "And when he was come into the house, the blind men came to him: and Jesus saith unto them, Believe ye that I am able to do this? They said unto him, Yea, Lord. Then touched he their eyes, saying, According to your faith be it unto you. And their eyes were opened."

Did not the words of Jesus indicate that the basis of his thinking at the moment was that blindness is a false report about man as the reflection of the one all-seeing Mind? In Science and Health, Mrs. Eddy writes (pp. 476, 477): "Jesus beheld in Science the perfect man, who appeared to him where sinning mortal man appears to mortals. In this perfect man the Saviour saw God's own likeness, and this correct view of man healed the sick." The blind men, it appears quite clearly, were receptive to Jesus' right knowing and seeing, and their thoughts being reachable, they immediately found themselves free.

Of course there is a difference between saying "I believe" with reservation and without. If one says that he believes Truth can heal him, but that he wants to see some change in matter before he fully accepts the fact, he may be disappointed. Is it not questionable to say to Truth, "Lift me out of this, and then I will believe"? God does not know us as ever separated from His highest good.

Asking God to see a lie as something and then to destroy it is asking an impossible thing. God knows nothing outside Himself. He is All, and man, reflecting Him, is the reflection of His allness. False reports are no part of Mind, or true consciousness. They can be no part of our consciousness, if we know that there is but one consciousness. Man has the God-bestowed ability to think his own thoughts. These thoughts are God's thoughts, for God is All. In reality, then, man is incapable of thinking ungodlike thoughts. There are none, for God is All. 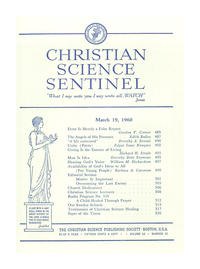