Although most people in the West still associate Rwanda primarily with the genocide that took place in 1994, huge strides have been made to heal and unify the country. I saw this myself when I was in Rwanda last summer. People identify themselves not as Hutu or Tutsi, but simply as Rwandan—signifying a desire to move past differences and conflicts.

But while Rwanda continues to enjoy peace, its neighbor Congo (DRC) has continued to suffer consequences from the genocide. Many of the Hutu militia members fled into DRC and continue to murder and rape civilians.

Sometimes it’s easy to write off events like these when you read about them in the news. Being on the ground in Rwanda and traveling to the border of DRC, close to where the fighting was, made me realize the importance of praying about situations like these, even when we’re thousands of miles away.

Over the course of 100 days, over 800,000 people were massacred in Rwanda. It was like everyone had simply gone crazy, fueled by hate-filled propaganda and fear. So I decided to focus my prayers on addressing insanity.

Sometimes we define insanity as a medical condition, but I love how Mary Baker Eddy, the founder of Christian Science, expands the definition to include mental states such as hatred as well. I thought about how to address the belief that man can be manipulated by fear and hypnotized by hatred.

Divine Mind is speaking to and guiding each one of us. There is truly only one power—the power of love and good.

Eddy calls this belief that man can be manipulated “animal magnetism.” She says that those who allow themselves to be controlled by others with malicious intentions “lose their individuality, and lend themselves as willing tools to carry out the designs of their worst enemies, even those who would induce their self-destruction.” She goes on, “Animal magnetism fosters suspicious distrust where honor is due, fear where courage should be strongest, reliance where there should be avoidance, a belief in safety where there is most danger; …” (The First Church of Christ, Scientist, and Miscellany, p. 211).

Especially in situations where anger and fear run rampant, people seem to lose the ability to think for themselves, and simply go along with what the masses believe and do. So how do we protect ourselves and others from this?

The Merriam-Webster Dictionary lists mind as an antonym of insanity. In Christian Science, one of the synonyms for God is “Mind,” and each of us is an idea of Mind. This is different from the human concept of mind. It is the idea that our identity is spiritual and that we each express divine intelligence and wisdom.

Eddy says: “The treatment of insanity is especially interesting.… The arguments to be used in curing insanity are the same as in other diseases: … the fact that truth and love will establish a healthy state, guide and govern mortal mind or the thought of the patient, and destroy all error, whether it is called dementia, hatred, or any other discord” (Science and Health with Key to the Scriptures, p. 414).

Divine Mind is speaking to and guiding each one of us. There is truly only one power—the power of love and good. Anger, agitation, and violence cannot be sustained. For example, in Rwanda, there was evidence of God’s presence, even in the midst of chaos and violence. Amid mass insanity, people risked their lives to care for complete strangers.

In the hotel we stayed at in Kigali, we learned that the staff had hidden more than a 1,000 people throughout the hotel. Other citizens had hidden people in basements, houses, barns, and fields. Their stories reminded me of Paul’s statement in Romans that “not even death or life can separate us from God’s love. Not even angels or demons, the present or the future, or any powers can do that. Not even the highest places or the lowest, or anything else in all creation can do that. Nothing at all can ever separate us from God’s love because of what Christ Jesus our Lord has done” (8:38, 39, New International Readers Version).

My experiences in Rwanda and the DRC showed me that we can’t simply wait for atrocities like this to take place and then address the situation metaphysically. We need to be proactive in affirming the fact that our—and everyone’s—true nature as a child of God can never be corrupted and confused. This is something we can each demonstrate daily in our own lives, and our interactions with others. Then, instead of simply reacting to events out of fear or anger, we will be responding from a place of love and divine inspiration that heals.

Ariana Herlinger co-manages TMC Youth for The First Church of Christ, Scientist. She worked with the Rwandan Youth Summit Committee for about six months before traveling there for the event last summer. 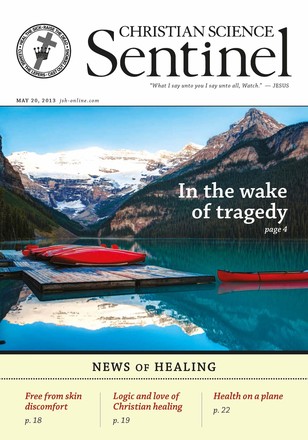 In the wake of tragedy

Calming fear in a crisis

A change of heart—for each of us

'Who does the nudging?'

"For with thee is the fountain of life:"

Photograph by Paul Trowbridge | May 2013

'Heaven all the way to heaven'

Logic and love of Christian healing

Health on a plane