Peace when we feel there is no peace

People the world over cry out for it. In nations like Afghanistan, El Salvador, or Lebanon, where armed confrontation leaves grief and despair; in cities where growing crime rates often foster anxiety; in communities where racial or religious prejudice may stir unrest and bitterness; in homes where personal conflicts keep families in turmoil—in all of these places, people are yearning for peace. Surely there must be a way to find it even when many feel that there is none to be found.

Some people may even question, What is peace? It would certainly include a laying down of arms; a respect for one another's property, individuality, and rights of conscience; a loving affection among brothers and sisters, parents and children, husbands and wives. But peace is more than that.

In its deepest spiritual significance, peace is a quality of God. And the real man—our own true identity—is the pure likeness of God, who is illimitable Spirit, infinite Love, the one Mind. As the reflection of divine Love, man expresses all the qualities that are God's. Real peace, then, is inherent in the very nature of man's being. Consequently it is not a commodity that can be lost or taken away. Peace is an element of who we actually are.

Christ Jesus' ministry was devoted to showing mankind the way of salvation, the way to demonstrate man's true selfhood as God's spiritual idea. Salvation surely includes knowing the peace of man's real being. And was not this the peace Jesus promised his disciples? In his farewell discourse, the Master told them that God would send the Comforter, and then he declared: "Peace I leave with you, my peace I give unto you: not as the world giveth, give I unto you. Let not your heart be troubled, neither let it be afraid." John 14:27.

Jesus wasn't offering merely the kind of limited and temporary peace the world might provide under only the best of human circumstances. Instead it was his peace—the peace he had demonstrated—that he now promised to all who would follow him. The peace he had proved in his own life found its source in God alone; it was not of the world. This peace continues to be available today because the ever-present Christ, Truth, reveals it to us as an eternal quality expressed in our true being now, even as it was expressed in the Master's own Christ identity.

The qualities of God are not subject to the whims of mortal existence. They are forever intact, unassailable. Spiritual peace is indestructible and is always present—inherent in man's being—even when the world claims there is no peace. Accounts of Christian martyrs who were persecuted in the years after Jesus tell of those who had faced death and yet had done so with grace, benevolence toward their persecutors, and a calm that spoke eloquently of the irrepressible peace their Master promised.

As we today draw from the deep well of God's peace, we discover the abundant joy and the vitality of life that come with it. Even in the face of catastrophe we can maintain the unshakable conviction that God alone is supreme, the only power, and that He is pure and unalloyed good. Through prayer we glimpse more of the spiritual truth of God's law governing all existence in harmony. We find protection and healing in our own lives. And thus we are enabled to pray more effectively for our world and for its protection and healing.

Each of us can help to usher in the Christly peace that dissolves enmity and finally ends strife, warfare, and bloodshed, which have no place in the kingdom of God. Based on the spiritual facts of being, our scientific prayer does bring results— practical results that are witnessed in changed hearts and a changed world. And no step of true spiritual progress can be turned back by circumstances, events, or abuses of human power. As the Apostle Paul wrote to the Christians at Galatia, "The fruit of the Spirit is love, joy, peace, longsuffering, gentleness, goodness, faith, meekness, temperance: against such there is no law." Gal. 5:22, 23.

Mary Baker Eddy, the Discoverer and Founder of Christian Science, gave serious attention to the Christian demand for establishing peace among men and nations. More than once she stated that the way to demonstrate lasting peace would be found in obedience to the first commandment. In a letter to the Boston Globe, December 1904, under the heading "How Strife may be Stilled," Mrs. Eddy addressed the need at that time for ending the war between Russia and Japan. She wrote: "The First Commandment in the Hebrew Decalogue—'Thou shalt have no other gods before me'—obeyed, is sufficient to still all strife. God is the divine Mind. Hence the sequence: Had all peoples one Mind, peace would reign."

In the following paragraph Mrs. Eddy concluded: "God is Father, infinite, and this great truth, when understood in its divine metaphysics, will establish the brotherhood of man, end wars, and demonstrate 'on earth peace, good will toward men.'" The First Church of Christ, Scientist, and Miscellany, p. 279.

In our lives from day to day, we can endeavor more diligently to obey the first commandment and to know God as the Father of all. As our prayer and our lives conform to God's commands, we will be doing something truly substantial toward bringing peace to troubled nations, cities, communities, and families. Where the fruit of the Spirit is harvested in even one heart, it feeds many. And "against such there is no law." 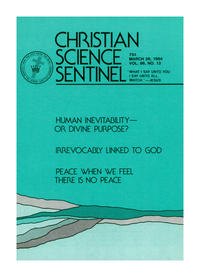