I love the story of the man who went onto a building site and asked three men what they were doing.

"I'm building a temple," was the reply of the third.

Interesting answers! All the men were doing the same job, but their attitude toward their work revealed their level of thought and, I am certain, the level of their job satisfaction.

When we leave school or university, will there be a job for us, a role for us to fulfill? Statistics and news reports might tell us that there are too many job seekers and not enough jobs. This would tempt us to feel depressed and to ask, "What's the point?"

Have we a role in the world? Christ Jesus, the world's greatest thinker, and the man who did more than any other person for his and future generations, said about his own role in life, "To this end was I born, and for this cause came I into the world, that I should bear witness unto the truth."

Mary Baker Eddy, a consecrated follower of Christ Jesus, wrote in The First Church of Christ, Scientist, and Miscellany: "As an active portion of one stupendous whole, goodness identifies man with universal good. Thus may each member of this church rise above the oft-repeated inquiry, What am I? to the scientific response: I am able to impart truth, health, and happiness, and this is my rock of salvation and my reason for existing."

As we catch the vision of our higher purpose in life as "temple builders"—servants of God—rather than merely earners of money or laborers in a material world, we see that our role could be defined as:
1. bearing witness unto the truth of being;
2. imparting truth, health, and happiness.

How do we do this? Isn't it by "walk[ing] as children of light ... proving what is acceptable unto the Lord"? These words are from the book of Ephesians in the Bible, and we have as role models in this work some of the greatest people in the Bible.

Who are these "lights"? In the famine in Egypt there was Joseph. Among the thousands of children of Israel, there was Moses. In the days of persecution in Jezebel's time, Elijah said, "I, even I only, am left" (I Kings). And, above all, when there were multitudes to heal and feed, Jesus was there to see ever-present, infinite substance.

In each incident, one "child of light" was able to save and lead countless other people. Throughout history, ancient and modern, individuals expressing the light of spiritual truth have been a vital and necessary part—in fact, the catalyst and guiding star—in humanity's growth out of mortality into a perception of spiritual reality.

Advertisements for jobs may never list spirituality among the qualities needed for a particular position, and yet it is what employers are looking for, even if they do not realize it. Because it is spiritual qualities such as intelligence, integrity, joy—qualities that are inherent in man as God's image—that result in accomplishment.

Jesus did not ask us to be good containers for the light or good lamp holders. He demanded of us the recognition of our true identity as the light itself—the expression of God, reflecting His purity and goodness. You know, there is all the difference in the world between being a lamp holder and being the light. The lamp holder can get battered, rusty, disfigured. But the light just is. Spiritual light flows out from its infinite source, God, divine Spirit, effortlessly, ceaselessly, and radiantly. Wherever it goes, the light uplifts, cheers, and reveals the truth. It easily dispels darkness, not because it tries hard or labors to do so but because it just is itself.

The light of spiritual being is not an advertising neon light, but a flame of selfless love.

Jesus said that we were to be the light of the world. Tracing the word world through his sayings, it is obvious that he expected his followers to be world thinkers and healers. Jesus used the word many times in his recorded sayings.

How is the light to shine? Jesus said, "Let your light so shine before men, that they may see your good works, and glorify your Father which is in heaven." The light is the fact of our being that we only need to let be. It cannot in reality be obscured by the smoke of human pride, darkened by the mists of selfish interests, hidden by fear or anxiety, distorted by human will, nor deflected by personal sense. The light of spiritual being is not an advertising neon light, but a flame of selfless love.

Light can never be contaminated or obscured by darkness. No shadows can ever creep into light. And the result of letting our light shine is that people may see our good works! As we are doing this, as we are truly "building temples" in our daily lives, all the other things—the productive activity and the wages—will be "added unto" us. For, as our Master taught us, "Seek ye first the kingdom of God, and his righteousness; and all these things shall be added unto you."

Our job and work in life are already assigned to us! We already have full-time employment! To be "children of light"! 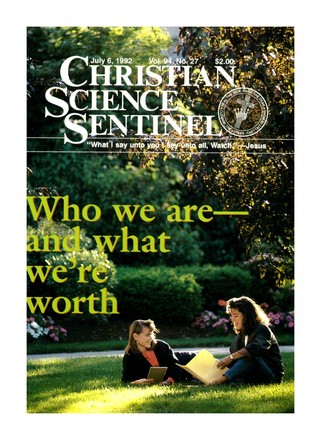 Letters from the Youth Meetings

A new view of the wilderness

By The Christian Science Board of Directors | July 1992

Neither boomer nor buster

Heredity and the ousting of ghosts

Can rain come from the sun?

My parents began their study of Christian Science when I...

My son and I have been very grateful for the spiritual truths...

By Frances E. McNary with contributions from Larry Seabranch | July 1992

Our family's first healing in Christian Science was a wonderment...