IN CONNECTION WITH a promotion I was given more than 15 years ago, my employer required me to take a physical examination with their doctor. I endeavored to answer the physician's questions honestly, and some of my answers led him to perform additional tests, including an MRI (magnetic resonance imaging). He subsequently diagnosed me as having multiple sclerosis, explaining that little was known as to the cause of this disease and that the medical community knew of no cure or effective treatment.

After discussions with my employer, additional consultations were scheduled with neurologists and a psychologist, with the goal of helping me learn to cope with what the doctors expected to be a lifelong difficulty, culminating in reduced energy, impaired movement, and eventually complete immobility. My employer was especially concerned that the stress of working long hours in a very demanding position would exacerbate the condition, and he was considering whether I should be put on long-term disability.

All of this was overwhelming to me, and I became very fearful about my future and that of my son, who was in preschool at the time. I was a single parent, and I was especially concerned about being able to provide for his needs in light of this diagnosis. I had been raised in a household that relied on God and the practice of Christian Science to resolve challenges to health, but fear seemed to paralyze my ability to trust God for help. I felt the most responsible course of action was to put myself in the care of the neurologists and psychologist so that I could hope to provide a good home for my child for the years to come.

The year following the diagnosis, I struggled with the symptoms of the disease, and eventually my employer did indeed place me on long-term disability. I saw a succession of neurologists, who, while earnest and caring in their efforts, could provide no permanent relief. One prescribed an experimental form of treatment, using a drug that I recognized as a narcotic from my experience auditing inventories at a hospital. When I questioned the wisdom of this course of treatment, I was told there weren't any other viable options. This was a wake-up call. Suddenly, it was clear that I was making no progress pursuing a better quality of life through medical treatment, but that there was an option—Christian Science treatment.

I began to pray deeply about the challenges I was facing. One day, I recalled having seen a television commercial years earlier that featured a professional baseball player advocating additional research and funding to treat multiple sclerosis. The commercial described in detail the symptoms his sister was suffering from. And I remembered thinking, "Wow, if I ever have to have some serious health challenge, I don't want it to be that one." I had always been very active in sports, and found the prospect of immobility especially dismal.

As I recalled this commercial, I remembered how my mother would always turn off the sound during commercials when my sisters and I were young. Many of the commercials were for treatment aids for various health problems. She would explain to us that we needed to "stand porter at the door of thought" and refuse to admit descriptions of disease into our consciousness, unless we were inviting them in to be objectified in our body (see Science and Health, p. 392). It became abundantly clear to me that I had let down my guard and had allowed myself to be impressed with the description of symptoms. I prayed to see clearly that God's view of man, including me, did not include these symptoms and, therefore, that they didn't have reality since they didn't have the power of God behind them, nor His approval. Nor could they take up permanent residence in my consciousness since I reflected only the consciousness of Mind (God).

In praying to know that I could only be seen as God's child, His image and likeness, I was led to move from California to New Mexico with my son. While I had many caring friends and co-workers in California, I often felt labeled with the disease and sensed that expectations for my future were not always positive. It seemed right to be in an environment where this didn't have to be a daily challenge. We were blessed with new friends and a new church home in our new community.

I also prayed to see that my child always had one true Parent, his Father-Mother God. And I became more aware of and grateful for the parenting that other family members, his school teachers, and Sunday School teachers were graciously providing. With my previous employer's approval, I was also allowed to take a position teaching fourth grade, despite being on their long-term disability plan. I realized my willingness to take on this position was evidence that my thought had shifted from being fearful of a future as a disabled person to being open to seeing God's purpose for me and trusting that He would provide me with the capacity to fulfill that purpose.

The classroom provided many more opportunities to apply this idea. I encountered situations where my students had been unfairly labeled as "disabled" in their ability to learn, behave appropriately, or attend to tasks assigned to them. As I consistently identified these labels as false—because they didn't have any law of God to support them—people had higher expectations for these students. It also helped solidify my understanding as to how God's laws, which are good and merciful, applied to me, and I was able to fulfill my teaching duties largely free of the fatigue I'd heard was often associated with a multiple sclerosis diagnosis. However, the fact that I was labeled with this diagnosis continued to weigh on me.

IT BECAME ABUNDANTLY CLEAR TO ME THAT I HAD LET DOWN MY GUARD AND HAD ALLOWED MYSELF TO BE IMPRESSED WITH THE DESCRIPTION OF SYMPTOMS.

A year or so after beginning to teach, while driving on a long trip with a friend, I was reading the weekly Christian Science Bible Lesson aloud and came to this statement: "God never endowed matter with power to disable Life or to chill harmony with a long and cold night of discord" (Science and Health, p. 378). I was struck with the veracity of this statement and the promise inherent in it that I was free from disability. All fear for my future ceased at that moment. I was filled with peace, and the certainty that I was free. And I never again experienced any of the physical symptoms associated with the diagnosis.

Some time later, I was asked to take another MRI for the insurance company. Afterward, I was kindly informed by the physician that they would have to discontinue the disability payments—because I no longer showed any signs of multiple sclerosis. Needless to say, I was very grateful for this confirmation of healing. It was further proof of God's care and of the healing power of Christian Science.

During the many years since this healing, my life has continued to be very active. Last June, I played in the United States National indoor volleyball tournament. My team, composed mostly of athletes a couple of decades younger than I was, placed ninth out of 48 teams. Not bad for someone who was told 20 years earlier to expect a lifetime of impaired mobility! 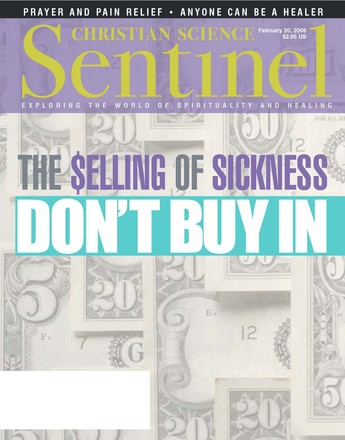 Don't fall for the ads

SAY 'NO SALE' TO THE $ELLING OF SICKNESS

A REPORTER'S VIEW OF THE DRUG PROMOTION LANDSCAPE

THE WAKE-UP CALL TO HEALING

A WALK OF PEACE with the shepherd of LOVE

You and I are worth knowing

GOD GAVE ME THE COURAGE

'I LOVED WHAT I WAS LEARNING'

LOVE WAS RIGHT THERE ALL THE TIME

BELIEVE IT OR NOT