Prayer when the bottom dropped out

THERE JUST seemed to be complete upheaval in everything I was doing. I was at a crossroads in my work. I was completely broke and deeply in debt.

And a relationship that I dearly loved was dying. This guy and I had been dating for almost two years, and I had really felt that this was it! This was the one. It had been the best friendship and relationship I'd ever had. But over a period of months, it just began to get worse and worse. And my friend was kind of at a crossroads. He wasn't sure what he wanted to do with his life.

There was a lot of turmoil. I began to really pray for some direction about everything, but especially about the relationship. I thought, "Everything else can fall apart, but this thing I'm holding on to."

What came to me one morning, when things had gotten to their worst point, was a really clear message. I asked God specifically what was going on and what I was supposed to do. And the message I got was: "Joni, you and he are on two different paths here. They're both good paths, but the two of you aren't going in the same direction, and you need to let it go."

I got the message, but I wasn't particularly interested in it. And I just went along my way.

That evening, my boyfriend called me to get together. He told me that he had been giving our relationship a lot of thought and had decided that it was time to give each other some space, and that he really needed to step back. Well, I had gotten the same message on the same day—but I was completely devastated. I had not really listened to it or heeded it. So I felt as if my world had dropped out from underneath me.

I didn't sleep much the next couple of nights, but I prayed a lot and I reached out to God for clarity and peace. Then on Sunday morning at about 4:30, I woke up remembering a passage from Science and Health. It includes the statement, "... when the winds of God blow, we shall not hug our tatters close about us" (p. 201). It just was so unique because this wasn't something that I had ever tried to memorize. But it repeated itself over and over to me.

I thought, "Well, what are the 'tatters' that I'm hugging close here?" Clearly, both this friend and I had received a message that things needed to change. So what were the tatters?

I thought about this for days, and even though I didn't fully understand what it meant to me, I felt peace and a sense of the winds of God blowing for goodness—that this was invigorating me and that I would be supported and sustained in my life.

My friend continued to call me every other day or so, and I found that the phone calls caused me further torment. He would call to see if I was doing OK. He was really sweet about it, but the calls were making it difficult for me to get some perspective on things. It got to the point where I blew up, and I wanted to go and throw rocks at his window—I was so upset by what I felt that I had lost.

What I needed to learn about relationships with other people was all rooted in my relationship with God.

I began to really listen and to reach out with all my heart for a feeling of tenderness and support. And I did begin to feel it. It became this overwhelming sense of love and companionship. I went around my apartment and began to clean, and I felt as if I was with a friend. I felt that God was loving me and celebrating me. And I began to realize that those "tatters" were really a mistaken view of what my happiness was made of—a limited sense of what I was all about and what the possibilities were. I realized that I could let my friend go.

That night I called him, and I told him how much I appreciated his caring enough to call me, but that he didn't need to call—that I loved him and we could just move on.

We got together. I had some things of his at my apartment, and I think he had a few things of mine, and we exchanged them. It was so interesting to me, because we both looked different—as if we had dropped weight. We just looked lighter and more peaceful.

This was such a lesson to me in learning about that idea of the winds of God blowing—that presence of love that won't let us settle for less than what we are, for less than what belongs to us. And it compels us to go forward; it compels us to discover the good that's new every moment and that God is providing for us. That lesson, in so many ways, has been a beacon to me.

It wasn't that there weren't times when I missed that friend. Because I did. I battled that sometimes. But I had a much greater sense of my own purpose and my own wholeness. I began to see that what I needed to learn about relationships with other people was all rooted in my relationship with God. That life was a full and complete and overflowing experience right now. And I see now that the dear friendship that I had with this man prepared me for other friendships and for the beautiful marriage that I'm now a part of.

I think that's what the love of God is all about. It's overflowing goodness, and it blesses us and all the people with whom we come into contact.

Joni Overton-Jung and her husband, Herb, live in Toronto, Canada. This account was first broadcast on Sentinel Radio. 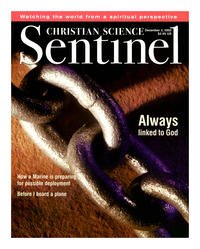