Study of the Bible, and obedience to its teachings by practicing what we are taught, bring freedom. This freedom is not just for oneself but for everyone. It is a freedom from material laws that bind and restrict us until they are exposed as having no authority, and we cease to comply with them.

In the Bible, the Apostle Paul says, “Be not conformed to this world: but be ye transformed by the renewing of your mind, that ye may prove what is that good, and acceptable, and perfect, will of God” (Romans 12:2). The Message by Eugene Peterson interprets the passage this way: “Don’t become so well-adjusted to your culture that you fit into it without even thinking. Instead, fix your attention on God. You’ll be changed from the inside out. Readily recognize what he wants from you, and quickly respond to it. Unlike the culture around you, always dragging you down to its level of immaturity, God brings the best out of you, develops well-formed maturity in you.”

I grew up in a country where there were more than ten different cultures, and many years ago the government believed that the best way forward was in separate development for these many cultures and races. They named this apartheid or “separateness.”

Although I did not agree with this system of government, it was only when I visited London that I became aware of how subtly the belief of separation and separate development had infiltrated and influenced every aspect of my life and thoughts. I had, as Paul put it, become so well adjusted to this culture that I was doing thoughtless things without even realizing what I was doing.

Nothing could stop me from expressing love for God and love for His creation.

I remember a particular evening well. It was snowing and bitterly cold in London, and as darkness set in, my heart went out to a TV engineer who had just phoned to say he would be with us by 6:00 to fix the TV. I comforted myself, knowing that I would give him a good, hot drink on his arrival. But when I opened the door, I was surprised to see a black TV engineer smiling happily at me. I welcomed him in, and he duly started fixing the TV. My thoughts were racing. I was experiencing deep conflict because I thought I couldn’t offer him that warm drink. I did not have a cup for him to use—because he was black.

He did a wonderful job and fixed the TV. I thanked him and shook his hand, and he disappeared into the night.

What had I just done? I was shocked at myself. Of course I had cups! What had stopped me from giving this dear man a drink? As I questioned my behavior, I realized that as a child I had experienced apartheid practiced in every aspect of my life, even down to the fact that the white workers got a tray of tea with special cups, and the black workers got their own tray with other cups specially set aside for them. I was shocked that, without even being aware of it, I had let this subtle intrusion of apartheid enter my thoughts, life, and actions.

I decided to be alert from that moment on to every thought I entertained about my fellow countrymen. I made sure that I was always aware of each as the loved child of God, who is Love. This was practicing the new commandment that Jesus gave us. He said, “A new commandment I give unto you, That ye love one another; as I have loved you, that ye also love one another” (John 13:34). Through my study of Science and Health with Key to the Scriptures by Mary Baker Eddy, I’ve discovered how to love in the way Jesus loved.

On my return to my home country, I practiced all that I considered to be loving behavior toward those I came into contact with in every walk of life—in the workplace, in the home, and most important of all, in my thought. I never again had separate cups or trays served. There’s a popular saying often attributed to Mahatma Gandhi: “Be the change that you want to see in the world”—and that is what I did.

No longer did I feel a victim of the system of apartheid, nor did I feel helpless—that there was nothing that could be done. I knew that nothing could stop me from expressing love for God and love for His creation, man and woman, who are made in His image and likeness, as it says in the first chapter of Genesis. Whenever I met people, I would identify and love the spiritual qualities they expressed, qualities such as kindness, helpfulness, and intelligence. And in this way, I started to love all of God’s children in the same way Jesus loved—reflecting how God, who is Love, as the Bible tells us (see I John 4:8), loves and sees each one of us. God and His creation are one—divine Love reflected by Love’s image, man.

And I realized that in human cultures the enforcers of separate development were as much in bondage as were those who were considered victims of this system of government. Mrs. Eddy writes in Science and Health: “Christian Science raises the standard of liberty and cries: ‘Follow me! Escape from the bondage of sickness, sin, and death!’ Jesus marked out the way. Citizens of the world, accept the ‘glorious liberty of the children of God,’ and be free! This is your divine right” (p. 227).

How freeing it was for me to know that in God’s kingdom there are neither victims nor aggressors—neither victims nor enforcers of a false system of government—and that every man, woman, and child is a citizen of the world. And that we can love every one of these citizens because they are all God’s children and are under His government, the only true government.

At that time my work included meeting university students throughout the country. It had been arranged for me to meet with a group of black students from their designated university. We were to meet in one of the townships. However, on the eve of the meeting, it was broadcast on the news that there were going to be major uprisings and protesting rallies in the townships. White people were advised to not enter any township, as it would be extremely dangerous.

I turned in prayer to the Bible for the answer and read in Ephesians, “Now are ye light in the Lord: walk as children of light” (5:8). This was my answer. This was God’s creation, these were God’s children, and I loved what I was learning. I realized that color in matter often seems to cause division, but color in Soul, God, unites His children, beautifying and bringing great joy and happiness to each. God’s creation reflects the fullness of Soul’s colorful creation in its myriad individual ways. As I thought about the idea that we are children of light, I realized that we were neither black nor white, but as “children of light” included all the colors of Soul—all of Soul’s, God’s, rainbow of qualities in infinite variety of beautiful expression.

My change of thought and action enabled me not only to find my freedom, to feel loved by and be the loved of God, but also to feel this freedom and love as belonging naturally to everyone with whom I came into contact. This was proved to me when a friend started to talk to me in Tswana, her native tongue. I looked at her, puzzled. “Oh, sorry,” she said. “I keep on forgetting that you are white!” Together we were seeing the children of God, children of light, and together we were “walk[ing] as children of light.” We were both aware of God’s creation, and together we could echo Psalm 139 in saying, “I will praise thee; for I am fearfully and wonderfully made: marvellous are thy works; and that my soul knoweth right well” (verse 14). We were one—one with our true source, our true and only governor, God, and His one creation. We were loving our neighbors as ourselves and loving them as Christ Jesus loved us. The government’s policies did not affect our ability to love. We were free!

A citizen does his part to pray about true brotherhood when he's wrongly accused.

Many years ago, I had an experience that taught me a lot about racism. It showed me that improving racial harmony in society begins on the individual level.Since girlhood I’ve loved and tried to li... 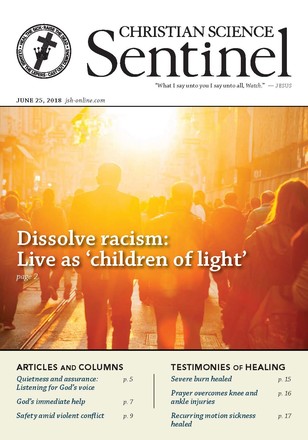 A beacon of light for honest seekers of Truth

Out of the woods

‘The secret place of the most High’

The Comforter teaches all things