I well remember the first time that I ever asked someone to pray for me. I wanted help in finding spiritual solutions to the many problems I was facing, so I called a Christian Science practitioner. We prayed together over several weeks.

One day I said to her, "Don't you think I should stop smoking?" I had been addicted to cigarettes for years, but smoking had become more and more obnoxious to me. I didn't like the way my clothes smelled, and, more importantly, I always felt guilty about it. I was brought up to think that women, in particular, should not smoke. So I felt continually on the defensive.

To my surprise, the practitioner gently said, "You have enough to worry about now. You can think about that later." For the first time since

I'd started smoking, I didn't feel guilty. But the desire to stop remained with me. And not long afterwards, I did stop smoking as a result of continued prayer.

To this day, I am still in awe of that practitioner's compassion and spiritual intuition, which allowed her to dismiss my "sin" so quickly. Her unprejudiced view helped me feel something of my true innocence as a child of God. This was unconditional love, which naturally flows from spiritual understanding. This was the kind of love the practitioner was expressing—untainted by a judgmental attitude. My essential goodness was more apparent to her than the mistakes I needed to correct.

That's the way Jesus lived and taught others to live. Mary Baker Eddy said this about him: "Jesus beheld in Science the perfect man, who appeared to him where sinning mortal man appears to mortals. In this perfect man the Saviour saw God's own likeness, and this correct view of man healed the sick" (pp. 476—477). The need in Jesus' day—as it is now—was to reach a more spiritual viewpoint.

To find out how to do this, you need only look to the life of this man. Jesus apparently did not see as insurmountable obstacles the diseases and sins of those coming to him for healing. His thoughts were constantly in line with his Father's. And by keeping focused on God in all the things he did, he naturally saw all of creation as a reflection of God. As lines from a hymn say, "If we live a life of prayer,/God is present everywhere" (Christian Science Hymnal, No. 341).

Jesus' disciples, seeing how his "life of prayer" enabled him to heal, asked him to teach them how to pray. So Jesus taught his followers—and not just those gathered around him then, but his disciples of all time—to begin their prayers with an acknowledgment that God is "our Father." And, to acknowledge that His will is "done in earth, as it is in heaven" (Matt. 6:9—10). This view of God's presence on earth ultimately excludes the possibility of sin and self-righteousness. Jesus saw far beyond "appearances," and people responded to this vision, with its lack of accusation. As a consequence, they were healed. Jesus was indeed seeing God's will "done in earth, as it is in heaven."

In this kingdom of heaven, there is no sin to be found, or to be judged. In Science and Health, Mary Baker Eddy wrote, "Heaven is not a locality, but a divine state of Mind [God] in which all the manifestations of Mind are harmonious and immortal, because sin is not there and man is found having no righteousness of his own, but in possession of 'the mind of the Lord,' as the Scripture says" (p. 291).

This real and tangible heaven, of which Jesus was fully conscious (and of which anyone can strive to be more conscious), includes neither sin nor self-righteousness. Therefore, as we become more aware of God's presence in every aspect of life, we become more aware that if a thought or action is truly beneficial, it is coming from God, and has the power to transform us.

That transformation is what each of us is looking for—whether we're struggling ourselves with some addiction, or someone we love is battling self-destructive or compulsive behavior. How easy it is to condemn and judge—both oneself and others. But does that negative mindset ever contribute to healing? Never. Worse yet, to view others as flawed or hopeless, and to see oneself as having gained the higher ground and therefore as more righteous, is completely counterproductive to the love and compassion Jesus showed were so needed to bring healing.

I wish I could say I've never been guilty of judging others, but I know that I have made errors in judging situations and people. I imagine most of us would admit to that.

How easy it is to condemn and judge—both oneselff and others. But does that negative mindset ever contribute to healing?

Jesus said, "Ye judge after the flesh; I judge no man." But he didn't leave it there. He went on actually to define righteous judgment and true vision. "And yet if I judge, my judgment is true: for I am not alone, but I and the Father that sent me" (John 8:15, 16). As the children of God—as His very image—you and I reflect everything about God, including His judgments. Since God is Love itself, God's judgment of His children can only be overflowing love and compassion. Knowing this helps anyone be more compassionate. With a compassionate view of others, one is less likely to label people who may be struggling with some compulsive behavior. In fact, as they feel the warmth and compassion inherent in a friend or family member's view of them, they may actually find a respite from their struggles.

A condemning state of consciousness allows for little spiritual progress, and not just when it involves judging others. The temptation to judge oneself wrongly is as destructive as condemning somebody else. Both of these accusatory points of view produce the same result—making a person deaf to our Father's "righteous [compassionate] judgment."

I remember one time, after days of trying to get rid of my own feelings of self-condemnation, bursting out, "God, if You can't make me better than I am now, that is Your problem, not mine." I laughed at those words, but they showed me the utter nonsense of holding on to feelings of self-condemnation. If you aren't seeing the perfect creature of God's making—in yourself and others—then you're either saying there are two creations, a good one and an evil one, or else you're saying that God creates evil-minded children.

That said, an examination of our minute-by-minute thoughts may reveal that you or I do not always stick to these convictions. The minute a person judges according to outward appearances, he or she is not seeing God's true, spiritual creation, but is adopting a false view of our fellow beings.

When I first began to read Science and Health and attend Christian Science church services, I felt my shoulders relax. I felt safe. You see, my work in television was particularly competitive. Any mistake was used to another's advantage, or so it seemed to me. But through my spiritual study, I felt more at peace, and I began to lose my defensiveness. I was less prone to judge myself harshly. I was beginning to understand something of the kingdom of heaven. I loved the passage I quoted earlier from Science and Health that describes heaven, not as a locality, but as a state of thought where one has "no righteousness of his own," but is "in possession of 'the mind of the Lord.'" I began to understand that this "mind of the Lord" is never judgmental or prejudiced by mere human appearances. I began to see that watching and praying to think and act more as Jesus did was the key to learning how to see rightfully. Careful guarding of my thoughts became a sure defense against self-righteousness, because in striving to follow Jesus, I recognized that I actually reflected God, and did nothing of myself. My judgments became more just because they came increasingly from the Father-Mother God—"which art in heaven."

I began to see that watching and praying to think and act more as Jesus did was the key to learning how to see rightfully.

It is a joy to judge this righteous judgment. More than simply refraining from being condemnatory, it gives you the opportunity to render the verdict "Not guilty" to all who come within your thought, be they loved ones or strangers. The recognition of innocence in yourself and others is a healing, redeeming power. You find this power when you remember to find the whole earth to be "as it is in heaven."

Bea Roegge is a contributing editor. 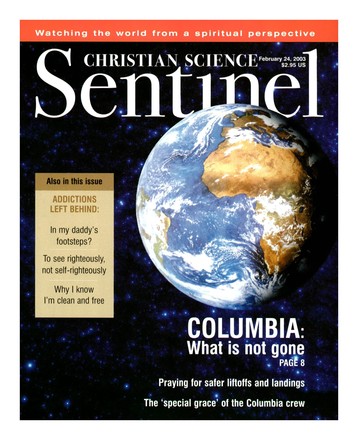