In Science and Health with Key to the Scriptures, Mary Baker Eddy explains animal magnetism as “the false belief that mind is in matter, and is both evil and good; that evil is as real as good and more powerful” (p. 103); thus, it logically follows that the one true force in defending ourselves from this belief is an understanding of God, who is all-powerful and ever-present Truth. Christian Science reveals animal magnetism as powerless because it has no authority from God, good, who is infinite. Adhering to our devotion to God and His eternal goodness, we can trust Him, knowing that He has given us the perception that forewarns and forearms us to prevent any effort of evil to invade our demonstration of spiritual liberty.

We can see how spiritual understanding based on divine Truth is fully prepared to identify and annihilate any aggressive mental enticement. When we overcome, through the power of Truth, sinful temptations such as dishonesty, lust, unfaithfulness, blind will, or weak morals, we are lessening these false claims for the world. The same goes for our victory over the temptation to react to the political news of the day—whether that news is factual or not! When the pull to react is rejected and put down, we prove the all-presence of God and the truth of man’s dominion as God’s spiritual likeness. Understanding that any evil or aggressive thought is simply an unintelligent suggestion helps guide us to the dominion that is ours.

The Bible admonishes us, “Take heed to yourselves, that your heart be not deceived, and ye turn aside, and serve other gods, and worship them” (Deuteronomy 11:16). If one is holding too extreme a view politically, these “other gods” might be identified as willfulness, hatred, self-righteousness, or prejudice. When passion over political views occupies our thought, unchecked by a sense of humanity, love, and moderation, we are tempted to engage in a warfare of sorts with those who hold differing opinions. This kind of behavior would rob us of our spiritual dominion and integrity. It requires moral courage and a genuine love for God and man to rise above the temptation to join the crowd of polarized thought.

I was talking with a friend whom I have known for many years. The subject of politics came up, and my friend voiced very strong feelings condemning several politicians and a political party. The tone of his voice was bitter and hateful. This was contrary to how I’ve always known him. It momentarily put me on the defensive, but I quickly realized that this was not his true self. I could see this attitude as impersonal error attempting to assert itself as my friend’s thoughts, feelings, and words, and to wrap itself up as his human identity. It didn’t work.

As the conversation went forward, it was apparent that he was parroting thoughts that had come from others. These thoughts had not originated with him, and he hadn’t thought them through. Isn’t that just the way mental contagion works—presenting itself as our own thoughts and stirring up fearful, discordant concerns?

Spiritual understanding is fully prepared to identify and annihilate any aggressive mental enticement.

Rather than attempting to debate his points or change his thought, I quietly reflected Christ, Truth, in that moment, affirming my friend’s goodness. This rapidly grew to include the politicians, pro and con, he was referring to. I had a choice to either humanly react to this wave of hatred and suspicion, or spiritually respond by turning to God for His answer. This enabled me to be the healer in that moment, affirming that one Mind governs its entire creation with intelligent love. The wave of human reaction simply bounced off the wall of the spiritual truths I was knowing, and ceased. We then moved on to other subjects and parted with a friendly goodbye and a hug.

Since that time, my thought has been further enlightened by returning to Science and Health and reading, “In the Science of Mind, you will soon ascertain that error cannot destroy error. You will also learn that in Science there is no transfer of evil suggestions from one mortal to another, for there is but one Mind, and this ever-present omnipotent Mind is reflected by man and governs the entire universe” (pp. 495–496).

The genuine practice of Christian Science gives us the ability to reject evil in every form on the basis of its powerlessness. Today, there are many worthwhile causes to enlist in. For myself, I have found that the most worthwhile is the Cause of Christian Science, showing me how to reject (sometimes with a struggle) the temptation to angrily react to injustice, blind will, or deceit, and instead to reaffirm the law of God, thus living and proving what Science and Health identifies as the “reign and rule of universal harmony” (p. 208). 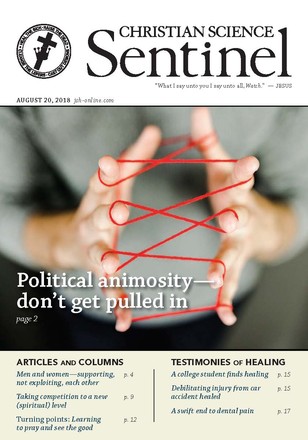 Men and women—supporting, not exploiting, each other

How many of you are there?

Learning to pray and see the good

A swift end to dental pain

Valuing ourselves as God does