I grew up in a family where my mother and grandfather suffered from manic depression. For many years, I saw my mother go to a psychiatrist and take prescription drugs to help her with this problem. She told me she was never given any hope that there would be a real healing; the doctors were just trying to manage and control her disease to some degree. But she never had even that level of relief.

When I was in my mid-teens, my father suddenly passed away and my mom became immobilized. In addition to trying to cope with the loss of my father, I became her caretaker. And I was having my own mental health problems—struggling with extreme ups and downs. I had grown up being told this illness was "in the genes" and that there was nothing that could be done about it. This cast a shadow of despair over everything I did.

Having seen how little help the traditional methods had given my mom and my grandfather, I looked for help elsewhere—through alternative and holistic approaches. I was not just dabbling in these things; I was conducting a very deep study. But there was no lasting healing to be found.

I didn't have to earn God's love. God's love was unconditional—a given and a gift.

Years went by—more highs, more lows. The extremes grew more acute. When I began to study Christian Science, the problem abated somewhat. I had healings of debilitating food allergies, bladder infections, eye inflammations causing temporary blindness. And my children had healings—high fevers, partial paralysis, a bicycle injury. I really loved Christian Science and found that it was helping me in so many areas of my life. But soon the mood swings became more apparent, and I was afraid my illness really was incurable—that somehow this was beyond God's help.

With this desire to really heal the problem, I resigned from my job to have more time to pray for healing. I began to pray and study Christian Science more deeply than ever, but my difficulty became more acute. I was alarmed at this. I became convinced that I just wasn't good enough to be considered God's child.

At this point I drifted away from attending church, which had been a great support. I also drifted away from studying the Bible and Science and Health. I began to read other philosophies, trying to find out what I was missing. This went on for about a year, still with no healing or progress in my condition.

Finally I decided that Christian Science was my only real hope and that understanding what it said about God and His creation was my only real salvation. I called a Christian Science practitioner to pray with me. Our prayer involved helping me turn from self-centeredness to God-centeredness—from focusing on the problem to focusing on the solution. This solution called for a better understanding of God's nature and laws—and of my relationship to Him. I began to see that I really was God's child. Being God's child meant I was perfect and complete because I was spiritual—not material, not chemical.

I also began to see that I didn't have to earn God's love. This love was unconditional—a given and a gift. Knowing that my spiritual status was solid and certain was an incredible boost.

That year and a half of prayer and spiritual growth brought wonderful regeneration in me. Bible accounts of healings, particularly of Jesus' healings of hereditary conditions, sped up the improvement I was making. One of these accounts told about the healing of the man who had been blind since his birth. As told in the book of John, it says that Jesus' disciples asked him, "Master, who did sin, this man, or his parents, that he was born blind? Jesus answered, Neither hath this man sinned, nor his parents: but that the works of God should be made manifest in him" (John 9:2, 3). This was tremendously helpful to me because I had always thought that my illness had been passed down through the family—from my grandfather to my mother to me. But finding out that I was spiritual—not a chemical being—enabled me to love them, and to see my mother and grandfather as spiritual, too. And I knew it was important to see this for everybody, not just for myself.

A misconception I had to clear up was thinking that some people have more spirituality than others.

Another misconception I had to clear up was thinking that some people have more spirituality than others—that there's a kind of "spiritual predestination," or monopoly on spiritual understanding. This related to the afflictions of heredity that I was suffering from: being born with certain tendencies that we can't do anything about. Feeling cut off from healing—excluded by the monopoly held by others who were more blessed.

As I began to pray and study Science and Health and the Bible more deeply, I loved this idea from Philippians: "It is God which worketh in you both to will and to do of his good pleasure" (Phil. 2:13). I needed to get hold of the fact that my birthright was to be the perfect child of God. And this birthright belonged to everyone. I began to see that I couldn't be excluded. This birthright really was mine. This had a huge effect on me, because I realized that I had been excluding myself from healing; I had been believing that healing was only for the select. What an eye-opener that was.

Christian Science was also showing me why and how I could obey the Ten Commandments. How and why I could follow the principles of living that Jesus taught. It's not a struggle after all; it's the yielding of our own will to God's will. Discovering that was another enormous step for me.

The study of Science and Health has opened to me the spiritual meaning of the Bible. One of the symptoms of manic depression is that the victim has tremendous highs and tremendous lows. But the book of Isaiah says this: "Make straight in the desert a highway for our God. Every valley shall be exalted, and every mountain and hill shall be made low: and the crooked shall be made straight, and the rough places plain" (Isa. 40:3, 4). Those statements clarified to me what it was I was struggling with. So much of the meaning of the Bible has to do with what goes on with the way you're thinking. Christian Science involves spiritual regeneration, thought regeneration. And a change of character follows. This is exactly what was happening with me. One of my flaws was a tendency to be very critical of others. Through prayer, I began to see that being critical of myself would show up in being critical of other people, too. As I began to see that I was God's loved child I began to understand—and this is an ongoing thing—that I could see my fellow brothers and sisters in the same light in which God saw me.

All of these steps of spiritual growth and understanding have had a practical effect in my life. The extremes of mood just don't exist any more for me—the emotional swings are simply not there. I am profoundly changed. Because of God's laws, I was able to walk out of the darkness and despair of mental illness.

Cynthia Tyler lives in Dorchester, Massachusetts. Her account of healing was adapted from a broadcast on Sentinel Radio. 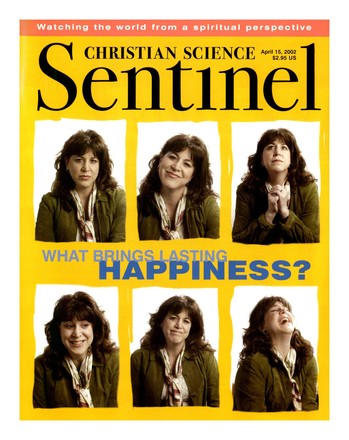 A pipeline to happiness

JOY that can't be stolen away

A reason to be glad

HAPPINESS that comes with a GUARANTEE

step by step OUT OF DEPRESSION

'Thou hast turned my mourning into dancing ...'

In Pristina, a green vase sings from a table left standing

'I became a writer, I now believe, to sort out words used and misused...