An 'impervious armor' against Agent Orange

"And now it's coming up to news time," said the ABC radio host. "You probably don't want to hear that North Korea is capable of striking Australia with nuclear, chemical, and biological missiles. That some of our Asian neighbors don't like our alliance with the United States. So listening will probably just make you feel more depressed and scared."

When information sounds like that, it's hard not to feel concerned over international conflicts and their impact on one's personal safety. Australia's federal government is considering joining America's antimissile shield program—"Son of Star Wars." My fellow Australians are thinking about taking precautions in case there is an attack. But no one here believes that we can really rely on military defenses, gas masks, or duct tape for our protection. So is there anything we can do to be safe?

This is not the first time I've faced such threats. Years ago I was offered work in Southeast Asia. Diseases such as malaria and typhoid fever were rampant—not to mention armed conflict. Before making a decision, I prayed for God's direction. I opened my Bible to the 91st Psalm. Each verse reassured me that I would be safe—from terror, pestilence, destruction, evil, plagues, accidents, and even death. The same psalm also told me what I had to do to experience God's protecting power—stay close to God in my thinking and not be afraid. I thought, "I can do that!" I took the job.

Not long after my arrival, a group of us had to spend time in a dense rainforest. When we got there, we found that tracts of the impenetrable foliage and tree canopy had been sprayed from the air with huge quantities of the chemical defoliant Agent Orange—an extremely toxic poison used in such things as weedkillers and bleaching agents. (Still the subject of ongoing class-action suits in Washington, D.C., Agent Orange has been cited as the cause of diseases and deformities among American and Australian military personnel and their families. See, for example, "Agent Orange back in court," The Christian Science Monitor, February 26, 2003.)

When we saw the dead and dying vegetation, my colleagues were worried about their safety and health. We hadn't been given any special clothing or any other means of protecting ourselves from contact with this chemical.

So, I prayed often that God would protect us from harm. One day as I was praying, I remembered something that Mary Baker Eddy had written: "Good thoughts are an impervious armor; clad therewith you are completely shielded from the attacks of error of every sort. And not only yourselves are safe, but all whom your thoughts rest upon are thereby benefited" (The First Church of Christ, Scientist, and Miscellany, p. 210). That gave me a lot of comfort, and I saw it as a protection plan. It included two key elements I needed to follow:

• to keep out of my thinking the fear that this chemical could harm us; and

• to hold to the spiritual truth that divine Love's powerful presence was safeguarding us around the clock.

These were defensive measures, and I grew to feel certain that nothing bad could break through these spiritual defenses. God would keep us healthy and well—unaffected by poison or any other dangerous elements.

As I continued to pray like this, we all began to feel peaceful and calm. Several days later we left the area and moved on to another that had not been contaminated. None of us suffered any ill effects. No one appeared harmed in any way, and I never heard of anyone in the group having future problems. Now, many years later, I am still free of any bad effects from exposure to this toxic chemical.

Remembering how I was protected in that situation continues to comfort and reassure me. It reminds me that there is a higher power looking after each of us. God's love is a shield. It protects us and keeps us safe and well. God's love kept me and my friends safe even in a contaminated rainforest, and that same Love can make us all feel sheltered and secure no matter where we are. 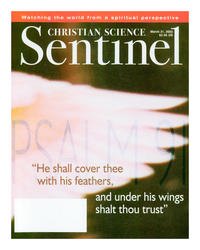