Two years ago I was healed of an obvious challenge with my shoulder that required much focused prayer. One day, while reading Mary Baker Eddy: Christian Healer, Amplified Edition, a particular passage caused a major paradigm shift in my thinking. In a letter to a student, Mrs. Eddy wrote: “Your mind is all that determines the case whether you are better or worse. The body and its symptoms have nothing to say about it” (Yvonne Caché von Fettweis and Robert Townsend Warneck , p. 234).

Even though I’d read many similar passages before, Mrs. Eddy’s statement in this letter suddenly struck me in a different way. It dawned on me that this passage uses the phrase “the body” instead of “your body” and referred impersonally to “its symptoms.” So I tried to reset my thinking and instead of seeing “my body,” I thought of it as “the body.”

This was a new level of understanding for me. Even familiar passages from Science and Health with Key to the Scriptures by Mary Baker Eddy took on fresh meaning. I started to notice Mrs. Eddy’s use of the wording “the body” often in her book. For example, “Become conscious for a single moment that Life and intelligence are purely spiritual,—neither in nor of matter,—and the body will then utter no complaints” (p. 14). Several months later, I attended a meeting, and it was fun to hear the speaker tell us that our body is just something we need at this point to get around.

I even decided to do a little electronic research and found that while Eddy uses the phrase “the body” hundreds of times in Science and Health, “your body” is only used a handful of times. Clearly, she saw the significance of sticking with the impersonal phrase.

Complete freedom came as I started to listen first to what divine Mind, God, had to say about my life.

With this new level of awareness in my understanding of body, whenever I deal with physical complaints, I think to myself, “Hmmm, the body is trying to tell me that my [insert body part here] hurts.” Instead of believing such a suggestion, I pray to know that “Mind’s government of the body must supersede the so-called laws of matter” (Science and Health, p. 182) and “any supposed information, coming from the body or from inert matter as if either were intelligent, is an illusion of mortal mind,—one of its dreams” (Science and Health, pp. 385–386).

After I mentioned these insights at a Wednesday evening testimony meeting at a Christian Science church, a fellow member shared an anecdote with us that had helped her over the years. A certain Christian Science practitioner would get ready to go into his office by looking in the mirror and saying to himself something along the lines of: “Well now, I’ve washed you; I’ve dressed you; I’ve made you as presentable as possible. So I don’t want to hear another word from you today.” This man truly understood that the body had nothing to say about who he really was!

It was as though I had a whole new perspective on what Jesus said in his Sermon on the Mount: “Therefore take no thought, saying, What shall we eat? or, What shall we drink? or, Wherewithal shall we be clothed? ... for your heavenly Father knoweth that ye have need of all these things. But seek ye first the kingdom of God, and his righteousness; and all these things shall be added unto you” (Matthew 6:31–33). I needed to see myself as a perfect, spiritual child of God, with no possible limitations due to any supposed bodily condition. I focused on taking “no thought” about the body’s assertions, and instead focused on expressing my innate and unrestricted spiritual being. I prayed, almost daily, with another quote by Mary Baker Eddy that supports these same ideas. She’s referring to Jesus in this passage: “The great Way-shower illustrated Life unconfined, uncontaminated, untrammelled, by matter” (Miscellaneous Writings 1883–1896, p. 30).

After much heartfelt prayer with these ideas, the shoulder condition did yield, and complete freedom came as I started to listen first to what divine Mind, God, had to say about my life instead of only what “the body” was trying to tell me. Science and Health states, “Matter can make no opposition to right endeavors against sin or sickness, for matter is inert, mindless” (p. 253). The material body is indeed powerless. It is not in charge. The body cannot tell me how to feel, or whether or not I can move around freely. Daily we have opportunities to affirm that the body has no power of its own to determine our activities or impose limitations on us. The body cannot boss us around. 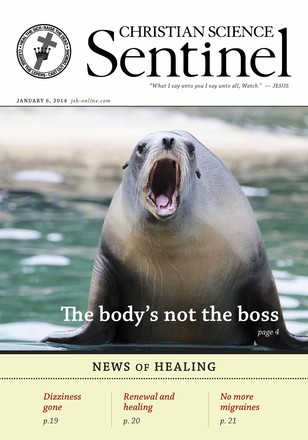 The body's not the boss

On performance and payment

Growing into the practice