Eddy, Mary Baker (1821-1910), the Founder and Leader of the Christian Science movement, was born on July 16, 1821, at Bow, near Concord, New Hampshire, U.S.A. She was the youngest of the six children of Mark Baker and Abigail Ambrose Baker. Her father was a man of local prominence, first at Bow and later at Tilton, New Hampshire; a landowner, a justice of the peace, a member of the committee having charge of the public schools, and a deacon of the Congregational church. Her mother was the daughter of Deacon Nathaniel Ambrose, of Pembroke, New Hampshire, who also represented the same type of citizenship.

In 1843 Mary Baker married Major George W. Glover, a native of Concord, New Hampshire, but a resident of Charleston, South Carolina. By occupation a contractor and builder, his business extended to adjoining states and to the island of Haiti. Major Glover died six months after their marriage while they were at Wilmington, North Carolina, pursuant to his business. Her only child (also named George W. Glover) was born three months later, after she had returned to New Hampshire. During the next nine years she lived at Tilton, New Hampshire, with her father, or with her sister, Mrs. Abigail Tilton, and occupied herself to the extent allowed by delicate health in caring for her child and in teaching. For a time she conducted a private school for young children; at other times she was an extra teacher in a New Hampshire Conference Seminary.

In 1853 Mrs. Glover married Dr. Daniel Patterson, of Franklin, New Hampshire, a dentist. This marriage proved to be extremely unfortunate. After they moved to Lynn, Massachusetts, in 1863, he became unfaithful to her and finally deserted her. Therefore, in 1873, she obtained a divorce for his desertion resulting from his infidelity. In 1877 Mrs. Glover (Mrs. Patterson having resumed this name) married Asa Gilbert Eddy, of Lynn, an ardent Christian Scientist and one of the first of her followers to engage in the public practice of Christian Science. After his death (at Boston, in 1882) Mrs. Eddy continued as a widow until she died at Chestnut Hill, Massachusetts, near Boston, on December 3, 1910.

Considering that educational facilities for women were limited when Mrs. Eddy was young and that her attendance at school was interrupted by delicate health, the education she obtained was exceptionally liberal. In addition to attending ordinary schools, she attended the Academy at Tilton and received instruction from tutors. An extensive reader of good literature, she also wrote acceptable poetry and prose which appeared frequently in newspapers and periodicals long before her discovery of Christian Science. After her discovery of Christian Science, she contributed the principle literature of this subject, employing for this purpose a distinctive literary style, as well as a notable ability to elucidate metaphysical and religious topics.

As a child and as a young woman, Mrs. Eddy showed an exceptional interest in religious subjects. In the development of this interest she was aided by her devout and intelligent mother, as well as by the Congregational pastors at Bow and Tilton and by other ministers whom her parents frequently entertained. At the age of twelve, she had the courage and independence to dispute a point in theology when she was examined for church membership. Between then and her first marriage, she often discussed religious topics with her parents and with ministers, exhibiting a comprehension which they regarded as remarkable. Shortly before her first marriage, one of her pastors who also tutored her for six or seven years (Rev. Enoch Corser) predicted for Mrs. Eddy a great future and spoke of her as "an intellectual and spiritual genius."

The beginning of Mrs. Eddy's interest in religious or spiritual healing can be traced to an incident which occurred when she was twelve years old, immediately before her examination for admission to the Congregational church. During a fever her mother commended prayer to God. Then, as Mrs. Eddy has related, "I prayed; and a soft glow of ineffable joy came over me. The fever was gone, and I rose and dressed myself, in a normal condition of health" (Retrospection and Introspection, p. 13). This incident, together with others of an extraordinary nature, is believed to have contributed to the observation and study which resulted ultimately in Mrs. Eddy's discovery of Christian Science.

Mrs. Eddy regarded her discovery of Christian Science as resulting directly and immediately from an incident which occurred at Lynn in 1866. While returning from a meeting of Good Templars, she fell on an icy street and was injured severely. Carried to a near-by residence, she was attended by a physician and cared for during the night. The next day she was removed to her home, as a local newspaper reported at the time, "in a very critical condition." On the third day after this injury, having obtained little or no relief, Mrs. Eddy asked for her Bible, opened it so that she read an account of Christian healing (Matt. 9:2) and again experienced an immediate recovery.

Concerning the study which then ensued, Mrs. Eddy has written (Retrospection and Introspection, p. 25): "The Bible was my textbook. It answered my questions as to how I was healed; but the Scriptures had to me a new meaning, a new tongue. Their spiritual signification appeared; and I apprehended for the first time, in their spiritual meaning, Jesus' teaching and demonstration, and the Principle and rule of spiritual Science and metaphysical healing,—in a word, Christian Science."

Mrs. Eddy's published works on Christian Science began with a pamphlet copyrighted in 1870, entitled The Science of Man, of which only one small edition was printed. In this pamphlet she said, "In the nineteenth century I affix for all time the word Science to Christianity; and error to personal sense; and call the world to battle on this issue." Her principal work, the Christian Science textbook, first entitled Science and Health but afterward entitled Science and Health with Key to the Scriptures, was issued in 1875. Occasionally revised by the author, "only to give a clearer and fuller expression of its original meaning," and finally revised in 1907, this book continues to be the fundamental and standard statement of Christian Science. Other published works by Mrs. Eddy include The People's Idea of God (1886), Christian Healing (1886), Unity of Good (1887), Rudimental Divine Science (1891), Retrospection and Introspection (1891), No and Yes (1891), Church Manual (1895-1910), Miscellaneous Writings (1896), Christ and Christmas (1893), Christian Science versus Pantheism (1898), Pulpit and Press (1895), Messages to The Mother Church (1900; 1901; 1902), The First Church of Christ, Scientist, and Miscellany (1913).

Naturally, Mrs. Eddy was the first practitioner and the first teacher of her religion. As a practitioner, she demonstrated her religion by healings in many cases, until duties which could not be left to others required all of her time. As a teacher, she taught students until she was obliged to leave class teaching to students whom she selected for this work. She began to organize the Christian Science movement in 1876 when she and a few of her students formed the Christian Science Association. After three years she and a selected number of her followers organized the Church of Christ, Scientist, into which the earlier Association was merged. In 1892, she and a selected number of her followers organized the Christian Science Mother Church, The First Church of Christ, Scientist, in Boston, which succeeded the earlier church. The Mother Church, together with the branch churches or local congregations throughout the world, constitutes the present organization. In 1886, Mrs. Eddy also organized The Christian Science Publishing Society as an agency of her church.

Next to what Mrs. Eddy did as the Discoverer and Founder of Christian Science, her greatest work was done as the Leader of the Christian Science movement. Although living a rather secluded life (at Lynn until 1882; in Boston from then until 1889; at or near Concord, New Hampshire, from then until 1908, except for a brief period at Roslindale, near Boston; and afterward at Chestnut Hill, near Boston), she initiated and either directed or supervised every important activity of her church; and she formulated the plan, set forth in the Church Manual, by which its affairs are to be conducted permanently. From the general point of view, Mrs. Eddy was a remarkable woman, for it was no light task to propose a new system of religious philosophy which was at the time and is even now so radically at variance with much of prevailing orthodox beliefs. In 1879, in her fifty-eighth year, she founded the Church of Christ, Scientist, which in half a century extended its branches throughout the world totaling (1928) 2,370 churches and societies. In 1883, she founded The Christian Science Journal, a monthly magazine (begun as a bimonthly), of which she was also the first editor; and fifteen years later she founded the Christian Science Sentinel, a weekly. In 1908, when Mrs. Eddy was eighty-seven, she established The Christian Science Monitor, a successful daily newspaper, giving news of importance but free from sensational and scandalous news. Nor did Mrs. Eddy, at these times, relinquish her other activities. Her own life illustrated and demonstrated her proposition that "prayer, watching, and working, combined with self-immolation, are God's gracious means for accomplishing whatever has been successfully done for the Christianization and health of mankind" (Science and Health, p. 1).

Besides the above-mentioned books and the article on Christian Science, see The Life of Mary Baker Eddy, by Sibyl Wilbur (1923).—(C.P.S.) 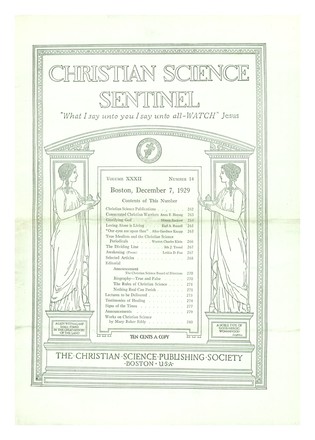 "Our eyes are upon thee"

"Antipas" writing on Christian Science in your issue of...

The report of a sermon by a traveling evangelist, printed...

By The Christian Science Board of Directors | December 1929

The Rules of Christian Science

Nothing Real Can Perish

I am reminded that almost twenty-three years have...

For the past eleven years Christian Science has been my...

Over twenty-five years ago Christian Science was brought...