Occasionally one hears it said that someone is coming down with a cold or some other disease. Obviously no physical stepping down from one location to another is meant, but, rather, a fear of descending from a state of well-being. To all mankind, Christian Science calls, "Refuse to come down!"

This Science teaches that the man of God's creating, God's image and likeness, possesses spiritual consciousness, in which there are no ups and downs, no suggestions of lack, sickness, or other discord. Man is the eternal, spiritual embodiment of health and harmony. This is his true identity.

However, in so-called human experience one may, on occasion, come down from an elevated consciousness of spiritual identification into a mortal sense of personality and suffering. But there exists no real power which can force one down against his own God-supported choice. In the wilderness, the devil did not endeavor to cast Christ Jesus down from the pinnacle of the temple but, rather, tried to prevail upon him to cast himself down. Exercising his God-given dominion over this evil suggestion, the Master refused to respond to it or to lower his high, spiritual thinking in the slightest degree.

In Christian Science, we learn that each one is endowed with divine authority to resist anything that appears to exert a downward pull. In "Pulpit and Press," Mrs. Eddy makes this challenging statement (p. 13): "Know, then, that you possess sovereign power to think and act rightly, and that nothing can dispossess you of this heritage and trespass on Love. If you maintain this position, who or what can cause you to sin or suffer?"

Centuries ago Geshem and Sanballat urged Nehemiah to cease rebuilding the wall of Jerusalem and to come down to them in the nearby plain. He replied (Neh. 6), "I am doing a great work, so that I cannot come down: why should the work cease, whilst I leave it, and come down to you?" Like Nehemiah, each one is given holy work to perform, namely to obey divine Mind's behests and to express Godlike qualities. To every suggestion of physicality, dejection, or distress, the same alert and steadfast response that Nehemiah made is pertinent today.

According to one Bible dictionary, the name "Sanballat" signifies "strength." In the false, mortal sense of life, mankind appears to go up to a certain height of physical and mental strength or power and then through a belief of age and weakness to come down to senility and decrepitude. In reality man is a Mind-created and a Mind-maintained idea with spiritual intelligence and spiritual senses, which continue always at the point of perfection. Hence neither the real man nor his faculties can ever go downhill or into decline. God is man's unfailing strength, and he reflects the power of God.

Geshem represents those who create a common report. Common report consists of widely held mortal opinions or beliefs. Mass media of communication convey all manner of suggestions concerning war, crime, lust, and contagion, and they graphically portray disease and the material methods advertised for its alleviation or cure.

However, popular opinions are mere human misconceptions. They are of no effect unless one heeds them and entertains them in his consciousness. The number of mortal minds believing them is completely unimportant. They cannot touch a consciousness retaining its natural spiritual elevation. The truth of being nullifies their pretensions. Only that which God reports is true, and He reports only that which is spiritually good and harmonious.

Particular alertness is required if one is to avoid coming down from spiritual consciousness by making a reality of another's apparent misfortune. Through a false sense of sympathy for the erroneous picture presented to the senses, one might descend to the same depths of discord and disease in which the Sufferer seems to be. On the other hand, one who expresses true compassion and perceives the unreality of that which seems so real to the sufferer is prepared lovingly and tenderly to lilt him into the recognition of his perfect and harmonious selfhood as the reflection of God.

Although Christ Jesus was besought by the nobleman to "come down are my child die" (John 4: 49), he did not descend to the level of the fearful thinking of the father, but lifted him to trusting faith. And the child was healed immediately.

Thoreau has written, "We avoid all the calamities that may occur in a low sphere by abiding perpetually in a higher." As thought is individually spiritualized, the tendency to come down to a lower sphere becomes less and less insistent. Thus the impositions of sin and disease are more often avoided, and the prophylactic or preventive aspects of Christian Science are increasingly made manifest.

Actually, there are no higher and no lower spheres. Divine Love is underneath as well as above and around us all. Since God is Soul, the infinite consciousness of good, the All-in-all, there is no evil or discordant place to which to come down. Man exists as idea within that consciousness, and from that consciousness he can never stray. How beautifully this is epitomized in these words of our Leader (Miscellaneous Writings, p. 79): "Immortal man is the eternal idea of Truth, that cannot lapse into a mortal belief or error concerning himself and his origin: he cannot get out of the focal distance of infinity"! 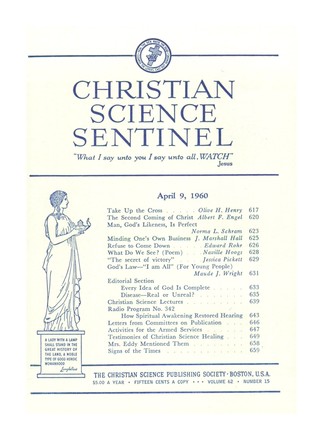 TAKE UP THE CROSS

THE SECOND COMING OF CHRIST

REFUSE TO COME DOWN

WHAT DO WE SEE?

"THE SECRET OF VICTORY"

EVERY IDEA OF GOD IS COMPLETE

with contributions from Geith A. Plimmer | April 1960

Over ten years ago I had reached...

It was over forty-five years ago...

Just recently while going through...

The first healing in our home...

By Margaret Hufford with contributions from Harold C. Hufford | April 1960