When it was time for lunch, Ann's mom called us, and we ran together to the kitchen door. But I was stopped from coming into the house. The woman had made a little makeshift table out on the porch for me. Ann was just devastated that I was being shut out—and I heard her asking her mom why I couldn't come in. But I didn't hear the answer—and I didn't want to. I couldn't even eat. I just wanted to go home. Now I hated white people, and I vowed I would never be around them again.

Not long after that, an Irish Catholic priest came to town. His goal was to build a first-class school for the black kids, St. Lucy's Academy. Many white people were unhappy about his plans and threatened him, but he wasn't intimidated. Once the school was completed, he brought five Irish nuns to be our teachers. They loved us and appreciated us. The love they had for us was just awesome, and we felt it so clearly. Their love got me beyond judging people because of their race. I loved those white nuns. Right away, I had to give up hating white people. From this experience, I learned that you couldn't judge an entire race based on the actions of some. What I gathered was that there was evil and good in all races.

Over the years, even though I shed my prejudices enough that I could say, "Some of my best friends are white" (or Jewish, or Asian, or whatever), I realized that I felt I was still divided from people of other races. I knew that I had to go further because as long as I felt this division from others, I wasn't completely healed of prejudice.

Then I found Christian Science, and I found the missing link. I made the connection. In the Bible it says,

"Have we not all one father? hath not one God created us?" (Mal. 2:10), and in Galatians: "There is neither Jew nor Greek, there is neither bond nor free, there is neither male nor female: for ye are all one in Christ Jesus" (3:28). Science and Health by Mary Baker Eddy opened up these Scriptures to me. For example, it told me this: "It should be thoroughly understood that all men have one Mind, one God and Father, one Life, Truth, and Love. Mankind will become perfect in proportion as this fact becomes apparent, war will cease and the true brotherhood of man will be established" (p. 467). Discovering what God is—the one Parent of all of us—opened up an entirely new view of everyone else. This view transcended race, class, color, creed, national origin, culture, descent, blood ties.

If there is only one God, I thought, then His creation is like Him, made in His likeness—and this God does not have chosen people or special people. We are all made like Spirit—we are all spiritual, not material. We are then all one race. Understanding this, I was healed of any lingering thought of division between races. Along with this healing, though, I didn't become abstract about viewing my brothers and sisters of different races and cultures. I was able to see and appreciate our differences, because those differences were no longer an issue.

Now I appreciate the beauty of diversity because God is our Parent, and we are all His children. We belong to Him. 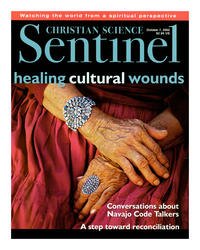