Estranged from family? Don’t give up.

In an article in The Christian Science Monitor, a researcher was quoted as saying, “. . . about a quarter of adult Americans have an active estrangement with a relative” (Stephen Humphries, “Another effect of the coronavirus crisis: Forgiveness,” May 5, 2020). The article went on to report a trend of reconciliations during the pandemic.

There are probably as many reasons for estrangements as there are families, and some of these reasons may be especially serious. But one recently identified common denominator mentioned in the Monitor article stood out to me: estrangement being viewed by some as a type of courage—cutting the people out of your life who don’t “promote personal happiness.”

This prompted me to see what the textbook of Christian Science, Science and Health with Key to the Scriptures by Mary Baker Eddy, has to say about happiness. For example: “Happiness is spiritual, born of Truth and Love. It is unselfish; therefore it cannot exist alone, but requires all mankind to share it” (p. 57). It came to me that estrangements can be healed by understanding that happiness is a spiritual quality of God—of divine Truth and Love—not a personal possession, and that all mankind is included.

Yet, when we disagree, it can seem as though our true, spiritual identities get obscured by masks of fear, ego, false responsibility, or envy. And sometimes we can relate to the old saying “You can choose your friends but not your family!”

If you are estranged from a family member, you might feel as I did when I hadn’t spoken to my brother for several years. Was I cutting him off because interacting with him didn’t “promote personal happiness”? Bluntly, yes. It didn’t seem possible that the anger and hurt feelings between us could ever be healed. But through Christian Science, I gained a renewed sense of humility, happiness, and respect by better understanding my brother’s and my own spiritual identity in God’s eyes. More on that later.

I prayed to see the attributes of Soul, God, such as innocence, dignity, and uniqueness, as our real identity.

So how do we go about even wanting to heal an estrangement? There’s a story in the book of Genesis in the Bible about twin brothers Jacob and Esau. Estranged after Jacob duped their father into giving him the blessing intended for Esau, Jacob fled to the home of a relative hundreds of miles away and lived there for many years, had a family, and built up considerable assets. When God directed Jacob to return to his homeland, he obeyed but was afraid. He heard that Esau was coming to meet him with what sounded like an army. Retribution for Jacob’s actions seemed inevitable.

The night before Jacob and Esau were to meet, the Bible describes Jacob wrestling with “a man” (see Genesis 32), which Science and Health explains as “wrestling with error” (see p. 308), or a mistaken sense of life and substance. Then an angel message from God, Science and Health continues, “smote the sinew, or strength, of his error,” and he ended up with his own sense of identity so clarified and uplifted that his name was changed to Israel. When Jacob and Esau met the next day, “Esau ran to meet him, and embraced him, and fell on his neck, and kissed him: and they wept” (Genesis 33:4).

What happened? While the story doesn’t say much about what Esau was thinking, we do know that the key to Jacob’s new perspective was his improved understanding of his spiritual, God-given identity. Here’s what Science and Health has to say about this: “The result of Jacob’s struggle thus appeared. He had conquered material error with the understanding of Spirit and of spiritual power. This changed the man. He was no longer called Jacob, but Israel,—a prince of God, or a soldier of God, who had fought a good fight” (p. 309). When Jacob saw himself in his true light—after wrestling mightily with his past, striving to grasp his actual, spiritual identity, and taking on a new humility—fear gave way and the brothers were reconciled.

Soul, one of seven synonyms for God in Christian Science, speaks to me about identity. As God’s image and likeness, created spiritually and all good, each of us shares the same identity as God’s reflection, which is expressed in individual ways. When we pray deeply to better understand God as Soul—as infinite individuality and the source of all beauty, character, selfhood, immortality, purity—we see the man and woman of God’s creating in ourselves and others.

For me, a deep desire to be in touch with my brother grew out of my daily study of Christian Science. It became impossible to hold on to the thoughts of frustration and anger at the same time that I was striving to understand God, divine Soul, better. I realized that I had been thinking of my brother for years as having an identity problem as he worked to find a clear path in life. While we enjoyed being together, our relationship was inconsistent. Then a conversation, during which we were both defensive and angry, resulted in years of not speaking.

I felt a complete change in my view; it was effortless to respond with unconditional love.

When I finally felt a desire to reconnect with him, it became clear that I needed to work on my own sense of identity as well as how I saw my brother. I prayed to see the attributes of Soul, such as innocence, dignity, and uniqueness, as the real identity of each of us.

One morning, I received a message through social media from my brother, asking for help. I was almost surprised that I wanted to reply so fast! I felt a complete change in my view of him; it was effortless to respond with unconditional love. This seemed almost miraculous, but I knew it was the natural result of the change in my thought through prayer. We soon talked on the phone, and I was humbled to find myself asking for his forgiveness after all those years of thinking I needed to forgive him. He readily forgave and asked for my forgiveness, too. Since then, we’ve been good friends, and I now see and appreciate the resourcefulness, work ethic, and wisdom he’s gained through his life experiences.

I also found out that when he sent that note over social media, he had just come out of surgery in which the prognosis was dire. He was alone, no family or friends around him, in a strange city. His background in the Christian Science Sunday School years ago proved important. Soon after we reconnected, he sent me this email, which he gave me permission to share:

I remember the day of surgery. I remember looking outside at a recycling truck and thinking about an aluminum pop can. You can crush it, cut it up, even burn it. But no matter what, you can’t touch or destroy the idea of the can. It’s impossible. . . . No surgery, disease, or medication could affect who I truly am. A prayer from childhood [a poem by Mary Baker Eddy, Poems, p. 69] came to me at that time:

“Father-Mother God,
Loving me,—
Guard me when I sleep;
Guide my little feet
Up to Thee.”

Tears filled my eyes when I read this note. This was beautiful proof to me that my brother’s identity had always been intact in God and that God had always been with him. “The kingdom of God is within you” (Luke 17:21), as Christ Jesus taught. Although it had been decades since my brother had attended Sunday School and learned Mrs. Eddy’s “Mother’s New Year Gift to the Little Children” quoted in his email, this angel message came to him right when he needed it most.

This was almost five years ago, and my brother recovered and was back at work within a few months. We now talk regularly and see each other when we can. Every time we communicate, I’m so deeply grateful to God for helping me see my brother—and myself—in an accurate, spiritual light.

So, if you are estranged from family, don’t give up. You may have to do some wrestling with pride, self-justification, and a variety of other emotions, but victory comes through God’s persistent love—and through realizing the identity of both you and your family as held in that love. 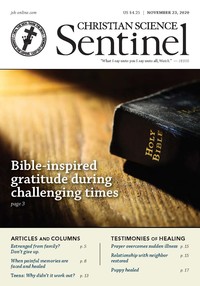