I Love Europe—its individual countries, its languages, traditions, lifestyles, its rich heritage and promising future. I appreciate diversity, and I find it every day in encounters with other cultures, whether I'm visiting the playground with our three-year-old or shopping in the supermarket or teaching at the university. We have friends who are Italian, French, Swiss, Austrian, Luxembourgian, Dutch, English—also Japanese and American. My family from my mother's side were originally French Huguenots who fled from France to Germany because of their Protestant faith. Part of my husband's family is of Dutch origin.

Diversity has never presented any threat to me but has greatly benefited my life. I like to see diversity as a hint of the richness of the divine creation. For me, such variety should not be dismissed as separating but instead can be appreciated as unifying, as indicating the indispensable role of each individual identity in God's universe. Not one can be dispensed with. We all are needed.

In his article "The goal of human existence," Albert Einstein refers to "the most important factor in giving shape to our human existence" as "the setting up and establishment of a goal; the goal being a community of free and happy human beings who by constant inward endeavor strive to liberate themselves from the inheritance of anti-social and destructive instincts" (from Out of My Later Years).

Clearly the "anti-social and destructive instincts" Einstein talks about have yet to be overcome. This becomes evident even as we look at Europe in 1992. There is growing economic unity and a more promising future without the iron curtain. Yet nationalistic, separatist tendencies haven't gone away. To some, the distinctiveness of other nations or ethnic groups is not enjoyed but feared.

Evidently, thousands of years of European history and the progress of civilization haven't been enough to promote lasting unity. Maybe that's because something beyond a merely conventional sense of progress is needed in order to harmonize conflicting elements of thought. Isn't that something a spiritual need?

What is needed is progress that grows from a perception of the spiritual heritage of man, progress that presents a solid, lasting basis for living together in peace. Mrs. Eddy indicates the nature of this forward movement when she writes in Science and Health: "Progress is born of experience. It is the ripening of mortal man, through which the mortal is dropped for the immortal. Either here or hereafter, suffering or Science must destroy all illusions regarding life and mind, and regenerate material sense and self." There is no shortcut in the ripening process. A fruit is either ripe or it isn't. A materialistic concept of man's origin and nature has progressively to give way to a discernment of his genuine selfhood: God's spiritual offspring. This is a central import of Christ Jesus' ministry, as we can learn from reading the New Testament in the Bible.

The understanding that we all live because God, divine Mind, causes man to be and governs him, is the truest and most enduring basis of cooperation. Whether we see a white or black face, a person of Italian or English—or for that matter, African or Asian—background, every individual, in truth, is the spiritual child of the creator, divine Mind. Wouldn't a more widespread acceptance of this spiritual nature of man, as opposed to preoccupation with his supposed roots in matter, impel the progress that is necessary if we are to cooperate and to live together in peace?

A materialistic concept of man's origin and nature has to give way to a discernment of his genuine selfhood: God's spiritual offspring.

Two years ago I was in another country and feeling very much among strangers. Was I the stranger or were they? I wasn't sure, and I felt cut off from my surroundings. I felt very lonely, very different—but different in a superior way. I felt I was better than they were.

There was a Christian Science Reading Room nearby, so I went in and with my whole heart reached out to God. I perceived my need for a change of thought and heart—for genuine progress. I prayed, and the answer, at first obscure, came after a while: "Omnipresence." In a glimpse I realized something of what the omnipresence of Spirit means. I saw that because Spirit is everywhere, every idea of Spirit, God, is inseparable from its divine source and has to express the divine nature. Otherwise Spirit would be rather like a Swiss cheese—here a hole, there a hole. Omnipresent Spirit needs every idea to express its substance, its all-power and all-action. Omnipresent Spirit is Love, because the divine all-power is all good.

I felt wrapped up in this Love and realized what Mrs. Eddy expresses so beautifully in a poem: "Father, where Thine own children are, / I love to be." The feeling of estrangement was healed in this Reading Room, and I enjoy more than before the adventure of getting to know everyone as God's spiritual idea, expressing all the wonderful facets of divine goodness.

Yes, progress is being made when "the mortal is dropped for the immortal," when misunderstanding, pride, and selfishness yield to spiritual understanding, humility, and selflessness. Labeling is stopped, listening is resumed, and we move forward.

Be ye all of one mind, having compassion one of another, love as brethren, be pitiful, be courteous: not rendering evil for evil, ... but contrariwise blessing. 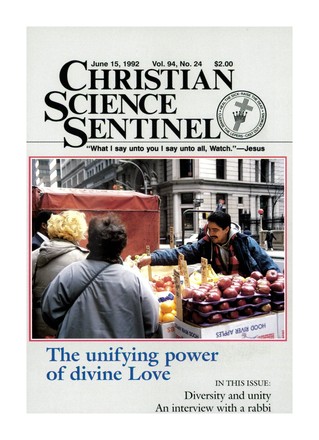 The peace of God is yours

A heart for community

"It would take a book to share all the healings I have...

"It takes a new kind of reading of the Bible"

with contributions from James Rudin | June 1992

Beginning our day with God

Strength to "stand the storm"

"Thou hast lacked nothing"

I was in the annex (a gym in my school that has four swinging...

During a major earthquake in the Los Angeles area in...

Whenever I have been puzzling over the answer to a particular...

I am grateful to God for His protection and love