I walked out healed

I had decided to take the vows of a monk. I accepted that there might not be long left for me in this life. I devoted my days to spiritual devotional meditations. This gave me strength, deeper and deeper peace—this despite my grave physical condition.

I used to be a ski instructor and a successful businessman. I had two small companies, organizing skiing trips and summer schools. It was a long way from there to being registered as physically handicapped. In my own words, I was "a basket case."

As a child, I had had a bone disease. It left me with one leg shorter than the other and curvature of the spine. That didn't stop me from living an active sporting childhood. I played soccer and tennis, surfed and cycled. I remained an active sportsman after leaving school.

Then in 1995 I suddenly started losing weight. Doctors were unable to explain this. I had months of tests and drug treatments. Eventually, they concluded that I had Irritable Bowel Syndrome. I could not tolerate certain food. I was also suffering from Chronic Fatigue Syndrome. The muscles on my back and neck had wasted away, exposing the weakness in my neck caused by the curvature of the spine. By the end of 1997 I had reached the weight of 7.5 stone [105 pounds]. I could not tolerate any food, except boiled brown rice and raw grated vegetables, suffered regular neck dislocations, and was bedridden.

Then in the spring of 2001 I saw a poster advertising a local lecture. It was about a woman I'd never heard of—Mary Baker Eddy. I couldn't understand why the idea of it wouldn't go away. I had no connection to or interest in this lady. And I had no desire to learn anything about her. Not to mention that the venue of the lecture was hard for me to access as a handicapped person. But the idea still would not leave me. It kept going round and round in my mind. So in the end I decided to go to the lecture.

Slowly, painfully, and patiently I was able to reach the lecture hall. I was exhausted and in some considerable pain.

What I heard made me feel uneasy. I was hearing the word Scriptures. As a young boy, I had felt very uncomfortable with people who were into "The Scriptures." I was hearing the word healing a lot also. I had spent a lot of money on every type of complementary or natural therapy, from acupuncture to zone-therapy and many in between. I had not come to this lecture for a healing. I was fast losing interest.

I also remember hearing that God means "good" and that this "good" fills all space at all times. With that, I started to feel angry. What was "good" about all that I had suffered for all those years? What was "good" about being registered as physically handicapped and incurable at the age of 35? I was enraged! Preoccupied with this tirade of angry thoughts.

Suddenly, however, something changed. My mind became completely quiet. I noticed a lessening of the pain. First in my stomach, then in my neck, and then in my knees. I felt as if I was no longer trapped in an undernourished, lopsided, and painful body. I felt I was a detached silent observer who was witnessing an increasing sense of ease. This ease was replacing the constant feelings of pain and disease. It was just like an ice cube left on a warm windowsill, gently melting and changing shape. So were the feelings of pain and stiffness gently melting and changing shape in me—loosening me from the stiffness that had trapped me for so many years. I was really stunned.

The simple ideas of Truth had transformed my painful body into one of almost sensationless ease. I was in shock at what happened next. I walked from the lecture hall with long, effortless strides, my head held high, chest out, with no pain, fatigue, or limitation. I walked the whole journey home—approximately one mile—and arrived overflowing with joy and amazement at what was happening to me.

I slept like a baby that night, and woke early to the thoughts of how God was good. God was really "the centre and circumference of my being." I remembered other ideas shared at the lecture the night before. There was this from Genesis: "God created man in his own image." And this: "God saw every thing that he had made, and, behold, it was very good."

Rolling out of bed, I experienced my next shock. I stood up perfectly upright, instead of the usual feeling of being lopsided because my legs were of different lengths. I was balanced standing tall in bare feet. Just as I tried to get this clear in my mind, I heard the words, "We must radically rely on God for our good." These were words that I had not consciously remembered hearing at the lecture. They seemed to have such authority. I was in no doubt as to their validity. I was compelled to take all of the footplates out of all of my left shoes, there and then.

Then I had an overwhelming urge to go to the shops and buy all the ingredients of a normal breakfast—things such as tea, sugar, milk, cereal, bread, butter, and honey. I had not been able to eat any of these foods for six years. I ate a wonderful, "normal" meal without even a trace of reaction or food intolerance. I remember thinking that these were not shocking changes but a return to the norm. I should expect more and more of them.

Within four weeks I had gained almost 4 stone [56 pounds] in weight. I was able to eat and digest every type of food. I walked over two miles every day and returned to cycling, hiking, and swimming. I literally felt reborn, with a new lease on life. I was aware that my life was of God and could never be taken from me. It couldn't be diminished in any way or be dependent on any material circumstances.

I had attended a Christian Science lecture with no expectations, and I left it with no limitations. I was freed for life. 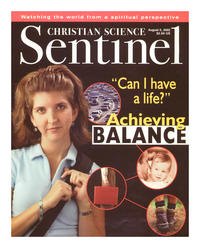