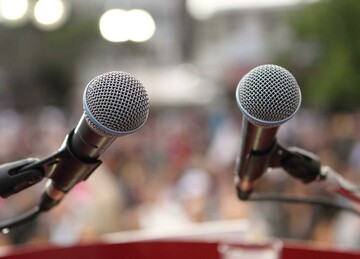 When considering the upcoming United States presidential and congressional elections, how often do those words come to mind? Perhaps not as often as we might hope. The picture presented by the current political situation is, in many ways, not very hopeful. The nation is fractured between two parties who often seem as though they couldn’t pass a bill agreeing on what color the sky is! The political discourse is at a low ebb, and even words like liberal and tea party incite anger from opposing sides. Meanwhile, as the country bobs along amid a stuttering economic recovery, polls often show little confidence that either presidential contender or members of Congress can fix things.

In short, “On earth peace, good will toward men” can seem a dream far removed from any present reality—something to aspire to, but squelched by the political passions of the day.

Yet, did Jesus view the world this way? Certainly, politics played a profound role in his life. The local governor was so afraid of losing power that he ordered every boy under age two around Bethlehem killed, trying to prevent Jesus, whom he saw as a potential rival, from surviving (see Matthew 2:16). The imperial government was so afraid of insurrection in its provinces that it crucified traitors, and later consented to a mob’s call for the crucifixion of Jesus himself.

Neither ploy worked. And just as significantly, Jesus never sought to take Herod’s power or to threaten Rome. In that way, his ministry presented a completely different take on what power is—one deeply relevant to this and every election cycle.

“The government shall be upon his shoulder … . Of the increase of his government and peace there shall be no end,” wrote Isaiah, speaking of the Messiah (Isaiah 9:6, 7). It seems certain that this is the only view of government that Jesus would have accepted—that the Christ-spirit he so beautifully demonstrated, which Isaiah called “Immanuel” (Isaiah 7:14), or “God with us” (Matthew 1:23), had the government on its shoulder and that its demonstration of power would only increase.

But how do we square that view of a government of peace without end with one of Republicans and Democrats, abortion controversy, and debt ceilings? By understanding the true nature of power as Jesus did. It is easy to fall into the habit of believing that a political government has power over us. And, indeed, on issues from health care to immigration to taxes, we may feel trapped under the policies of our congressmen, senators, or president, just as Jesus could have had occasion to feel trapped by the whims of the Roman governor. Pontius Pilate certainly thought he held Jesus’ fate in his political hands. He told Jesus so: “Knowest thou not that I have power to crucify thee, and have power to release thee?”

But Jesus directly disproved this sense of things. His response to Pilate’s question changed the world: “Thou couldest have no power at all against me, except it were given thee from above” (John 19:10, 11).

Even when faced by a government that was threatening to torture and kill him, Jesus refused to give it power. He was faithful to the thought that Isaiah perceived: The government was upon the shoulders of Christ, the recognition of “God with us” that Jesus had sought to prove throughout his ministry. That he held firm to that conviction of the presence of God’s power—of a government of peace without end—even when faced with crucifixion was one of his greatest lessons for us.

Through his life, Jesus showed us all that we are free from any power apart from God. He refused to accept any other authority, and because of this, death had no hold on him, as he proved in the resurrection and ascension, and as Peter told the crowd on the day of Pentecost (see Acts 2:24). It need hardly be added that politics had no hold on him, either. As he was being arrested before the crucifixion, Jesus told Peter, who was trying to save him through human means, “Thinkest thou that I cannot now pray to my Father, and he shall presently give me more than twelve legions of angels?” (Matthew 26:53).

The Apostle Paul caught a glimpse of this truth—that no power but God can have control over us—on the road to Damascus, leading him to call us “heirs of God, and joint-heirs with Christ” (Romans 8:17). In this refreshed view of himself and the world, he wrote, “For I am persuaded, that neither death, nor life, nor angels, nor principalities, nor powers, … nor any other creature, shall be able to separate us from the love of God, which is in Christ Jesus our Lord” (Romans 8:38, 39).

Jesus' ministry presented a completely different take on what power is.

This love of God, which is the “God with us” in Christ, changes the whole scene, as Paul saw. We are not individual actors contending against one another and perhaps against greater power that can change our lives through certain policies. We are one in a divine whole, with no contention, no lack, no injustice, no misunderstanding. The prophet Ezekiel caught some glimpse of this true and present state of things when he wrote: “And I will bring them out from the people, and gather them from the countries, and will bring them to their own land, and feed them upon the mountains of Israel by the rivers, and in all the inhabited places of the country” (Ezekiel 34:13).

The fact is, we cannot see the divine government—in which each one of our neighbors appears to us as blessed and beloved—unless we are willing to lay down our material sense of things. That includes narrow self-identification as Democrat, Republican, conservative, or liberal, done in a way that would exclude others. Divine government acknowledges only the power and action of God and His goodness, precluding us from bringing with us any precooked, personal notions about what justice and power are.

Mary Baker Eddy drove this point home in the October 1893 issue of The Christian Science Journal. In an article titled “An Allegory,” she spoke of what was needed to ascend from the valley of humility to the summit of the divine mountain, to share the view that Ezekiel saw: “Many there were who had entered the valley to speculate in worldly policy, religion, politics, finance, and to search for wealth and fame. These had heavy baggage of their own, and insisted upon taking all of it with them, which must greatly hinder their ascent” (Miscellaneous Writings 1883–1896, p. 327).

Eddy had great love for her country, and was a proud Daughter of the American Revolution. Yet when asked what her politics were, she answered: “I have none, in reality, other than to help support a righteous government; to love God supremely, and my neighbor as myself” (The First Church of Christ, Scientist, and Miscellany, p. 276).

We do little for ourselves or others when we dive into the shallow end of politics. We do infinitely more when we stand with Jesus and refuse to leave the standard of the one righteous, divine government, no matter what the human picture. Then, God is with us, and we bring the divine government to earth.

“God has built a higher platform of human rights, and He has built it on diviner claims,” writes Mary Baker Eddy. “These claims are not made through code or creed, but in demonstration of ‘on earth peace, good-will toward men’ ” (Science and Health and Health with Key to the Scriptures, p. 226).

Mark Sappenfield is the deputy national editor for The Christian Science Monitor. 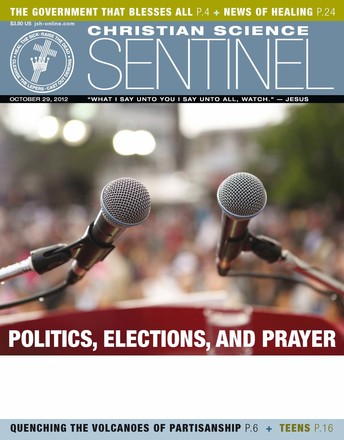 The government that blesses all

Quenching the volcanoes of partisanship

Health anxiety: Help for the well-but-worried

Frisbee and a 'holy day'

When I prayed for myself...

The 'business' that replaces 'busyness'

'Undisturbed' and healed after an election

By Ann Kneeland with contributions from Jennifer Kneeland | October 2012