Divisiveness seems prevalent these days. We see it in national and international relations and in society in general. It impacts communities, churches, and families.

Some would say that this is human nature, a view predicated on a perception that we are driven by fear and motivated by self-interest, in perpetual competition with our neighbor. And God is frequently conceived of as the originator of this imperfect individuality. With the underlying concept of everyone having their own private sense of good, their own mind, and their own interests and goals, conflict becomes inevitable, and spiritual unity, with its associated peace and harmony, eludes us.

Many people find this definition of a selfish human nature, and a divine nature that allows or even causes it, unsatisfying, even unsettling, as though we are condemned to live out a life of inharmony and unending strife. Rejecting such a viewpoint, yearning for a higher ideal of humanity, and seeking a more substantial and lasting sense of brotherhood and sisterhood in unity with God, people often turn to the Bible. There we find men and women faced with the same kinds of challenges that we experience today, and we see concrete, practical examples of how they overcame those challenges through a more spiritual approach to life, an approach we can put into practice ourselves.

This opportunity to find guidance and healing in the Bible is available to all. When read in a spiritual light, the Scriptures reveal, beginning with the first chapter of Genesis, the primal nature of God, our divine Parent, as perfect, good, omnipotent Spirit, and each of us as God’s beloved child, reflecting this perfect divine nature of goodness and indivisible oneness with God.

Subsequently, starting in Genesis 2, a view of an imperfect Lord God and what He creates is presented, tainted by evil, disunity, inharmony. A careful study of the Bible reveals the progressive emergence in human consciousness of the eternal truth set forth “in the beginning,” (Genesis 1:1)—that the real man and woman are entirely spiritual, made in God’s image and likeness.

The consummate example of this original, spiritual identity is Christ Jesus, and the foundation of Jesus’ life was his unity with God. His extraordinary exemplification of this unity gave him complete dominion over fear, illness, even death. He boldly declared, “I and my Father are one” (John 10:30). He claimed no mind or will separate from God. He expressed the deepest humility in saying, “I seek not mine own will, but the will of the Father which hath sent me” (John 5:30).

Unity is of divine origin, a spiritual state of being, and only when it is understood on that basis are we fully satisfied.

Jesus yielded to God, good, under all circumstances, and that absolute reliance on the divine will and the acknowledgment of his unity with God enabled him to always bless those around him. There was nothing in him capable of injuring his fellow men and women, even if his actions or words at times were stern. He demonstrated that God’s will is absolute good and embraces all humanity in that goodness.

Our deepest desire for unity, then, can’t be satisfied by merely acting in concert with others. Unity is of divine origin, a spiritual state of being, and only when it is understood on that basis are we fully satisfied, and only then do we experience unity as stable, lasting, and progressive. Because this spiritual state is our true being, the inclination for unity is natural to us, innate within us.

When we, like Jesus, wholeheartedly acknowledge our oneness with God, yielding completely to the divine will, nothing can stop us from being a powerful healing influence for unity in our community and beyond.

The ultimate potential of such influence is indicated in Science and Health with Key to the Scriptures by the Discoverer and Founder of Christian Science, Mary Baker Eddy, which says, “With one Father, even God, the whole family of man would be brethren; and with one Mind and that God, or good, the brotherhood of man would consist of Love and Truth, and have unity of Principle and spiritual power which constitute divine Science” (pp. 469–470).

We can begin to prove the power of understanding our true, spiritual unity in small ways right where we are, as I found when I was newly appointed to my town’s Zoning Board of Appeals. I was immediately struck by the serious and frequent disagreements among the members over the cases which came to us. Despite a temptation to resign from the board, my prayers instead led me to stay and love my board “neighbors” by holding in my thought the reality of the unity that Jesus spoke of and proved.

Before and during each session, my prayer was to see and love each member as one of God’s children, and I prayed to listen for the divine will, silencing any preoccupation with what I thought I personally wanted as an outcome. Praying to see our unity as a spiritual fact involved shutting out whatever elements of fear, concern, human will, or focus on personality would arise. As I did so, I found that the more effective I was at turning from that limited, human perception of others to the divine sense of these neighbors, the more it seemed to me that our decisions were benefiting all concerned and were accomplished with less contention. Members were respecting one another more and seeing themselves as a team coming together to reason about each case.

During the remainder of my term, our interactions and discussions were characterized by goodwill, mutual respect, and unity. This was a proof to me of the power of prayer to heal division, and a realization in human experience of man’s natural spiritual inclination toward the unity Jesus taught.

This is a modest case compared to situations of disunity that need to be healed around the world. But it points to the good that can be accomplished if we each approach how we live our lives and interact with others from this basis of understanding everyone’s true unity with God, good, in which creator and creation are one, with no possibility of separation. Proving this reality in our individual experiences helps us to more confidently affirm the same truth for all humanity, contributing to the healing of division more broadly.

In his loving and deeply spiritual prayer for unity among his followers, Jesus says: “Holy Father, keep them in your name, which you have given me, that they may be one, even as we are one. . . . that they may all be one, just as you, Father, are in me, and I in you, that they also may be in us” (John 17:11, 21, English Standard Version). This indicates for all time the significance of unity, its foundation in God, and the basis of our natural inclination to express it.

There is Mind's oneness constituting all, a healing unity, a lasting bond—the infinite togetherness of man with God. This undivided wholeness, understood, cherished deep through purity and love,of...

The power of unity

It may not be a common subject on talk shows or the newsstands, but unity is something essential to progress—in our own lives, in families, in neighborhoods, in churches, in society.

A prayer for unity

I joined the United States military toward the end of the Cold War. At that time the country was generally united against the external threat of a nuclear-armed Soviet Union. Through unity and... 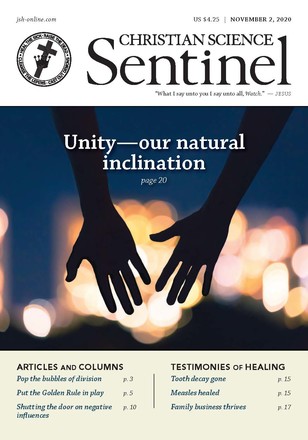 Pop the bubbles of division

Put the Golden Rule in play

Shutting the door on negative influences

How I prayed during my basketball game

From worry, to welcome, to worship