"Thou shalt embrace a son"

Much is said and written today about control of the population explosion and limiting the numbers in families; but what about the people who do not have children at all and long for them? There is no vacuum of this, or of any, kind that the healing presence of the Christ cannot fill.

Throughout the Bible there are instances of childless couples who had their deep desire for an enlarged sense of family fulfilled. God, as our loving Father-Mother, is forever supplying man, His expression, with everything he needs for his completeness, satisfaction, and fulfillment. This fact acknowledged and understood will bring about completeness and harmony in human life. Either it will bring the evidence of children into one's experience or take away the desire for them. Either way it will not leave one's life barren in any sense of the word.

The story of Elisha and the Shunammite woman in the Bible is a beautiful example of this fact. This woman's spiritual sense had recognized those Godlike qualities expressed by Elisha; she had welcomed into her consciousness, her mental home, the prophet's vision—the vision of spiritual reality that contradicts the material senses. On one of his visits to her home, Elisha, knowing that she was childless and had a great desire for a child, promised that this desire would be fulfilled. He said, "Thou shalt embrace a son." II Kings 4:16;

No doubt the Old Testament writer who recorded this saying meant simply, as a modern translation puts it, "You shall have a son in your arms." The New English Bible; But the very word "embrace," with all its connotations of loving, welcoming, and including, opens a healing avenue of thought in Christian Science. How effortless and freedom giving to realize that true conception is embracing, not creating— embracing in thought what already divinely is, rather than creating something new in matter!

In Science and Health, in the very first explanatory paragraph of her chapter on Genesis, Mrs. Eddy writes: "There is but one creator and one creation. This creation consists of the unfolding of spiritual ideas and their identities, which are embraced in the infinite Mind and forever reflected." Science and Health, pp. 502, 503; All ideas are embraced in this one infinite Mind, God. There are not two creations, one material and the other spiritual. There is only one, the spiritual. Mind, God, includes in Himself Father, Mother, and child—one in being. Mind knows only its own completeness, harmony, and glorious happiness, and the object, the very expression of this knowing or embracing, is man.

How comforting and reassuring it is to know that as the sunbeam reflects light from its source, the sun, so man reflects the creative power of his source, God. It is as impossible for man to be separated from the creative power of God as it is for the sunbeam to be separated from the sun. The sunbeam embraces within itself all the essential qualities of its source of light. Similarly, man embraces within his own being all the qualities of God, because he is God's expression. Hints of the divine creativity are found all about us. For example, it is often said that inventors and great men "conceive an idea." What does this actually mean? Conceiving—even in terms of the human intellect—is not creating. Isaac Newton did not create the laws of gravity, nor Einstein the theory of relativity. Today's natural scientists have not created the underlying laws of the universe that enable men to circle the earth and moon. People have not created these things; they have merely conceived, or discovered them—embraced them in thought—and then given evidence of them for all mankind to see.

Mrs. Eddy says: "There can be but one creator, who has created all. Whatever seems to be a new creation, is but the discovery of some distant idea of Truth; else it is a new multiplication or self-division of mortal thought, as when some finite sense peers from its cloister with amazement and attempts to pattern the infinite." p. 263;

Today each individual can conceive the ever-present idea of true, spiritual childhood by embracing in his consciousness, his mental home, the childlike qualities of God. As we actively welcome such qualities as purity, freshness, and joy—cherish them, love them, be them—we can expect to see the human evidence of them in a God-outlined way.

Life can never be barren or incomplete for one who is embracing the Christ, the true idea of God and of His universal family. We can all rejoice in the fulfillment of the promise in Mrs. Eddy's statement: "Beholding the infinite tasks of truth, we pause,—wait on God. Then we push onward, until boundless thought walks enraptured, and conception unconfined is winged to reach the divine glory." p. 323. 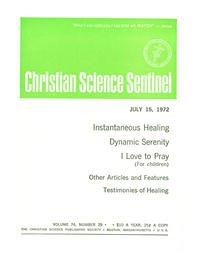