AS I WATCHED AND PRAYED while Hurricane Katrina hit the Gulf Coast, I remembered the time in 1995 when family members called me from the US Virgin Islands, as Hurricane Marilyn was bearing down on them. Beyond the danger to lives such a storm presents, it's also tempting to fear the loss of homes, jobs, and those substantial intangibles: joy and security. My relatives did lose their home but came through the storm safely, and the islands' economy rebounded.

Lately, other kinds of anxiety appear to be building in our region. High gas prices tempt me to wonder if I'll be able to afford to take important trips, and there's no public transportation where we live. Recently, our state of Texas has been identified as having the most people without health insurance coverage— leaving many feeling vulnerable to healthcare costs.

Fear can seem to keep us captive, hold us back from doing what we ought to do, or from enjoying our lives. But, effective weapons against fear are always withing reach.

When I was very young, memorizing poems, hymns, and Bible passages, much like memorizing facts in school, seemed pointless. As I grew up, though, those very hymns and poems that I'd memorized were my best defense against fear when I was anxious, needed healing, or was praying about what seemed like a serious relationship, business, or financial problem.

When fearful, I also would focus on a citation from the Weekly Christian Science Bible Lesson that explained my present perfection and safety in God's care. A single spiritual idea can be enough to find freedom from fear. Mary Baker Eddy explained that "... dark images of mortal thought...flee before the light of Truth" (Science and Health, p.418). Staying close to God, Truth, has helped me understand that fear is always illegitimate and never to be accommodated.

Another tool I've carried with me is torn-out pages from a paperback Christian Science Hymnal. Whenever I've felt hypnotized by sudden fears, I've had facts about God's care with me in my pocket as a reminder.

On occasion I've found it helpful, as many others do, to open the Bible at random and see what God has to say. One time at work, I was seriously doubting the direction I was going in on an important project. I asked God to tell me if I should continue or move in another direction. I opened the Bible to a passage in Song of Solomon: "He brought me to the banqueting house, and his banner over me was love" (2:4). I saw that passage as God's love song for His creation, and that idea gave me confidence and told me to stay the course. Ultimately, that proved to be the right choice for me.

A SINGLE SPIRITUAL IDEA CAN BE ENOUGH TO FIND FREEDOM FROM FEAR.

It was a Christian Science practitioner who gave me one of my most cherished "directional tools" for eliminating fear. One day I was feeling uncertain, fearful, mentally struck behind what felt like huge dark curtain, so I called this woman for prayerful treatment. She reminded me of God's all powerful presence, and then read to me part of a poem: "Go into the darkness and put your hand into the hand of God/ That shall be to you better than light and safer than a known way!"

That I could trust God even in darkness—as a little child would trust a parent on a walk at night, holding hands—made a huge impression on me. I felt I could release responsibility for my well-being to God. Soon, I was out of that ever of God's constant goodness and the deceptive nature of fear.

I later learned that the poem the practitioner had quoted was written by Minnie Louise Haskins in 1908, and is called The Gate of year." It begins:

I said to the man who stood at the gate of the year
"Give me a light that I may tread safely into the unknown."

And he replied, "Go into the darkness and put your hand into
the hand of God
That shall be to you better than light and safer than a known
way!"

Whenever you feel challenged by an illusion calling itself fear uncertainty, discouragement, or sadness, God's freeing ideas are as close as your own thoughts. And trusting God is better and safer than any "known way." 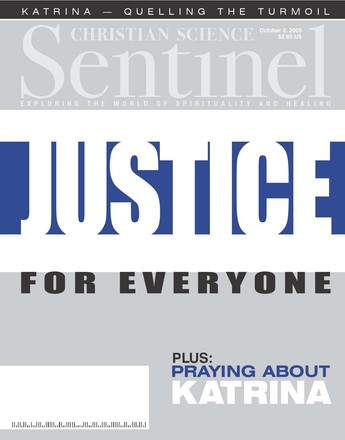 LIVING UNDER THE JUSTICE OF DIVINE LAW

DOES JUSTICE HAVE A SPIRITUAL BASIS? WE ASK AN ATTORNEY

By Warren Bolon with contributions from AL GEMRICH | October 2005

'FATHER, YOU ARE IN CHARGE'

'The Return of the Dove to the Ark'

A LIFE PREPARED FOR THE HEALING PRACTICE

MY BEST WEAPONS AGAINST FEAR

By BRIAN CLENDENEN with contributions from GORDON BUHRER | October 2005