I'm always on the lookout for books that inspire me and don't drag me down. It's exciting to find a book that illustrates spiritual qualities such as honesty and persistence. During trying times, I often end up reading a children's classic novel or series. That's why I, along with millions of other parents, was happy when J. K. Rowling launched the series.

The Harry Potter stories are about a mistreated orphan boy who discovers his true identity on his eleventh birthday. Although raised by a "non-magical" aunt and uncle, he discovers that he is a wizard, which explains the powers that he has always had.

When I first encountered the series, I read the book to my daughter at bedtime, and found myself still reading into the wee hours. These books offer powerful examples of the forces of good uncovering and destroying evil. There are also illustrations of clear moral reasoning, persistence in working out problems, and how reaching out with good motives to others can change lives for the better. And they're fun!

Some critics believe that by featuring the subject of wizards and witches (subjects, by the way, that have long been accepted in such children's classics as The Wizard of Oz), the series endorses real-life witchcraft. I find that, rather, the Harry Potter series reminds me of C. S. Lewis's The Chronicles of Narnia, whose main characters—all children—encounter spiritual and moral lessons along a fantasy road of adventure and danger. These adventures, like those of Harry Potter and his fellow students at Hogwarts School of Witchcraft and Wizardry, enlighten and enlarge the characters' perception of themselves and others in a profound way.

Similar to the character Aslan in The Chronicles of Narnia, at Hogwarts School it is the wise and benevolent Professor Dumbledore who challenges Harry and his young fellow wizards and witches not to be fooled by appearances—the supposed weakness they have as children, or the apparent power that evil has over them, their fellow students, or their teachers. They soon discover they had what they needed all along: strength of character, honesty, and courage.

In Harry Potter and the Sorcerer's Stone, the character Neville Longbottom, an awkward, small boy who continually "messes up," shows what true depth of character is. His example of courage in the face of the disdain of his few friends is highlighted at the book's climax, and this courage plays a part in the triumph of good in the series' first installment.

In Harry Potter and the Chamber of Secrets, Mrs. Weasley, the mother of his new friend, takes Harry in when she discovers he's been mistreated by his family. She also stands for some key points on the moral compass—kindness, not using talents for selfish gain, honesty, being aware of one's impact on others—and represents motherhood in its deeper dimensions.

The dark wizard Voldemort represents evil. Voldemort is not at all a sympathetic character. He's actually pretty gross, physically and mentally. He inspires so much fear in others that he's called "He Who Must Not Be Named." The characters that appear to be in Voldemort's camp, however, are not totally bad—as in life, where things aren't always conveniently black and white.

The Harry Potter series offers more than just good stories. I've enjoyed the company of a number of children as equals while we regale each other with our favorite characters and scenes. It's rare to find such a fun series of books for kids—and one that emphasizes morals, good motives, and solid character. So here's my suggestion: Don't be put off by the fixation some have on the "witchcraft and wizardry" theme until you read it yourself. If you do read it, I believe you'll find as much to recommend in the series as I have.

Kate Dearborn reads stories to her daughter, Taylor, at home in Austin, Texas. 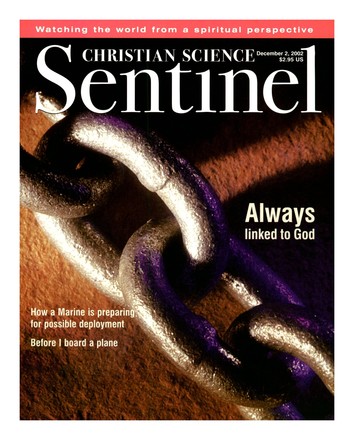 Safety travels with you

How many alarms do we need?

How a Marine is preparing for possible deployment

Security when a safe place is hard to find

Prayer when the bottom dropped out

SAFE on the road

Why I read Harry Potter into the wee hours ... and aloud to my daughter

The joy that lasts