“Bring your school bag and all of your personal belongings with you.”

It was junior year and the middle of third period. Why was I being called out of class by a school administrator?

I was a good kid. I had never been searched before. But when I got to the office, they told me they’d received a tip from a “credible source” alleging that I had been selling/distributing controlled substances to fellow students on school grounds. At the end of the search, they concluded that I had nothing on me, but I still felt as if I hadn’t been totally exonerated. I wanted to be completely free from any doubt or question.

After I was escorted from the room, I called my mom. She was understanding and supportive. She told me that my true identity, as God’s innocent and pure child, was and is God-protected and maintained. She also assured me that obedience and moral courage don’t put us in harm’s way, but that in being obedient, we’re safe from every so-called danger.

My mom also reminded me of one of my favorite Bible stories—the story of Shadrach, Meshach, and Abednego. These three men’s obedience and loyalty to the one God, Spirit, protected them even from death (see Daniel 3). This was a very comforting reminder of God’s ever-presence and my safety in God’s presence. When I felt ready, I went back to class.

I felt free from any accusations.

As a lifelong Christian Scientist, it was natural for me to turn to prayer for guidance and comfort. So for the rest of the day, I continued to pray about the situation. I also turned to an article I like from the January 1916 Christian Science Journal titled “God’s Law of Adjustment.” I found a section of the article that perfectly addressed my feelings and concerns. It reads: “If our good is evilly spoken of, this does not affect the situation in any degree. Our responsibility ceases when we have complied with the demands of good …” (Adam H. Dickey).

This passage helped me realize that nothing untrue or erroneous can ever be used as evidence in God’s court, so to speak. In God’s court, I was free, sinless, pure, and perfect. This was the way God was seeing me, and I knew there was no other mind to perceive or judge me in some other way.

I held to these ideas over the next week, but it was challenging. There were some whispers in the halls, and I felt as if my positive character and reputation had been defamed as a result of this false accusation.

On Sunday, I brought up the issue with my Sunday School teacher. We talked about the story in the Bible about the woman who had committed adultery and was to be stoned in public, but was saved from being stoned (see John 8:1–11). While the woman in the story had actually done something wrong, whereas I had not, I still found helpful parallels between her experience and mine. In the story, Jesus says, “Neither do I condemn thee: go, and sin no more.”

I saw that this is the power of Christ, God’s saving love. It frees us from anything that would keep us under a shadow, whether it’s actual sin or a misperception of who we are. I prayed to know that I, too, could be free—to feel trusted by my peers and family, and not to have a false accusation hanging over my head. It was eye-opening for me to realize that I could be free of feeling misjudged when I’d done nothing wrong. The same redeeming love that freed the woman in the story was liberating me.

Praying this way allowed me to be and feel free from any accusations. I felt convinced that the way God knows me, as completely innocent, was the only way I had ever been, or could ever be, known.

The rest of my junior year went well. Thanks to the prayer about this situation, I felt empowered to be myself, and this resulted not just in a better and more close-knit group of friends, but also in the joy that comes from knowing myself a little more the way God knows me.

This article is included in:
2016 - SPECIAL EDITION

A Collection for Teens - January–June 2016 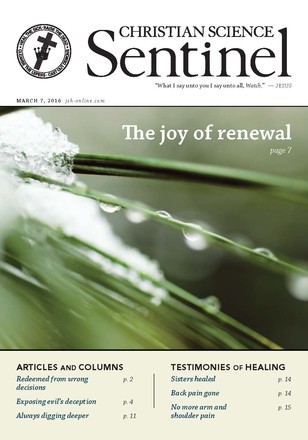 The joy of renewal

No more arm and shoulder pain

"By its own volition, not a blade of grass springs up..."

Sing unto the Lord a new song all the earth