A ‘change of base’ in thinking

One of the liberating truths we learn in Christian Science is that what we understand of God and His creation is reflected in our experience. This fact is liberating because it means that even in the face of situations that seem beyond our control, a better understanding of God and our relationship to Him can transform our thought, adjusting our experience in a way that restores health and harmony.

Now, this doesn’t mean that we sit here and decide just exactly how we’d like things to adjust. It also doesn’t mean that we try to use human willpower to bring about an adjustment. If we’re truly putting Christian Science into practice, it means that when facing a problem, we’re willing to put aside material sense and consider instead what is true of God, and of man and woman as His spiritual image and likeness—the truths Christ Jesus proved in his healing ministry.

Elucidating the Christly, scientific method of healing, the Discoverer and Founder of Christian Science, Mary Baker Eddy, explains, “The effect of this Science is to stir the human mind to a change of base, on which it may yield to the harmony of the divine Mind” (Science and Health with Key to the Scriptures, p. 162).

Divine Mind, God, is the All-in-all, infinite Spirit, filling all space. By reason of this, all we truly need to understand is what God, the one all-knowing Mind, knows of Himself and His expression, man. Science and Health states, “Man is the expression of God’s being” (p. 470). As the idea, or expression, of God, Mind, man’s true being is comprised entirely of the spiritual qualities that express God’s nature, including perfection and harmony.

However, our human experience presents a seeming mixture of good and bad; but when we acknowledge and better understand the spiritual facts of being, we can plant our thought firmly on the side of spiritual reality. With that “change of base”—from material belief to spiritual understanding—our thought naturally yields to the divine fact of harmony, and we see that the discords we face have no real substance.

When I was working as a middle-school teacher, part of my job was to help out at extracurricular events. One afternoon I was on crowd patrol at a football game. Part of my task was to stand at one of the openings in the fence surrounding the field and politely direct attendees to where we were selling tickets, closer to the bleachers. My supervisor explained to me that our policy was not to force people to buy tickets, because our real priority was that families be able to watch their loved ones participate in the game, regardless of their financial situation. So my instructions were to do my best to encourage attendees to buy a ticket, but not to create ill will by hounding them if they chose to enter without one.

I followed this instruction, which seemed loving and respectful of our community. However, one of the attendees was evidently unaware of the policy and had been angrily watching me as I carried out my duties. She walked over and berated me for just standing by while people “snuck in,” when the athletics program would have benefited from receiving the admission money. How could I just let this happen?

As I recall, she left before I could even respond to her—not that I felt ready to at that point! Lots of emotion surged. I felt angry that someone I didn’t even know had just wrongly scolded me. I was hurt that someone would talk to me that way at all. And I felt guilty because despite the rationale for the policy, I felt she had made a good point, too. But rather than stew about what had just happened or confront the woman, I decided to turn to God in prayer and trust Him to uplift my thought about the situation.

I experienced a “change of base” in my thinking.

Mentally putting aside the material appearances, I began to reason from the basis of man’s true nature as described in the first chapter of Genesis, where we read that God created man in His own image and likeness, and that His creation “was very good” (verse 31). I realized that as God’s daughter, His spiritual offspring, this woman’s true identity was not a material personality that could be volatile, but rather the spiritual expression of God, manifesting Godlike qualities. As Mary Baker Eddy observes in Science and Health, “Like produces like” (p. 551). Because God is wholly good, this woman—as we all are—was the reflection of perfect goodness. She was the expression of God, who is divine Love and Principle, and I saw her concern for our sports program, and her desire for fairness, as human evidence of that spiritual truth.

I kept praying this way, letting the spiritual intuitions that came to me in prayer replace specific aspects of the ugly picture that had been presented to me. And as I prayerfully listened for the spiritual truth about this woman, I experienced a “change of base” in my thinking. My human perception that there was a troubling situation yielded, in some degree, to an uplifted, spiritual perception of the harmonious relationship of God to all His ideas, and of those ideas to each other. After a few minutes of praying this way, I felt at peace.

Then, about 10 or 15 minutes after that, the woman approached me again. This time she was calm. She apologized for talking to me the way she had and acknowledged that she knew I was doing my best in that situation. I realized that her comments specifically spoke to the three aspects of our first conversation that had troubled me: that it was an unjust accusation, was an unkind interaction, and had left me with a sense of guilt. We parted on pleasant terms.

I stood there in awe. When I’d been praying to uplift my thought—to “yield to the harmony of the divine Mind”—I hadn’t been attempting to do anything but regain my own sense of peace. I didn’t even consider that there might be any results beyond that. Yet the change in my thought not only brought me peace, but also adjusted the nature of the whole experience.

As I prayed to better understand what had happened, these lines from Science and Health came to thought: “Mind is not necessarily dependent upon educational processes. It possesses of itself all beauty and poetry, and the power of expressing them” (p. 89). From this I understood that God, Mind, is always causing us to know what we need to know, right at the moment we need to know it. He is the source of every one of His children, His spiritual ideas, and maintains an eternal and direct connection to each one.

From the moment I was confronted with an untrue image of man, God was impelling me to realize the harmony He knows. As divine Mind inspired my prayers, I was beholding aspects of man’s true spiritual nature, so the false belief that any of His children are discordant mortals began to dissolve. My prayers hadn’t changed either myself or the woman, but had opened up to me a God’s-eye-view of what is true about us. And accepting the spiritual reality as true had restored harmony to the human scene. It’s a lesson that was indispensable to me, especially in my capacity as a teacher, and I’ve carried it forward ever since.

A year or so later, I saw the woman in the school’s front office. I don’t think she remembered me, but when I recognized her, I just silently thanked God for the reminder of this incident. It had proved to me that God, divine Mind, is always guiding His beloved children, who are the harmonious, spiritual reflection of His own being. 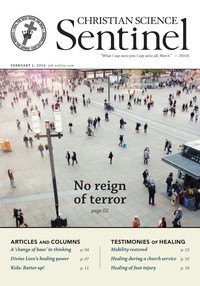