That didn’t mean my interest in politics had ended. Voting, keeping apprised of public policy developments, and keen news watching continued unabated. Playing an appropriate part in civic life was never in question. What was in question for me was where I was investing my hope for humanity’s progress. I felt increasingly inspired to trust God as an ever-present source of the answers needed to address local, national, and international concerns, and a line in a psalm captures why I felt that way. It says, “Great is our Lord, and of great power: his understanding is infinite” (Psalms 147:5).

Today, polarized political anger tries to impress us constantly. We might even feel drawn into perpetuating it. But we can instead mentally embrace all humanity in the opposite recognition of this spiritual fact given by Mary Baker Eddy in the Christian Science textbook, Science and Health with Key to the Scriptures: “The divine understanding reigns, is all, and there is no other consciousness” (p. 536).

“The trouble is,” said my young, creative friend, “we love to argue ideas, but instead of coming together and agreeing (or respectfully disagreeing), we become more and more entrenched in our own c...

From disdain to respect

At a math conference I attended as a graduate student, we were divided into teams to decipher an encrypted message. I was perhaps the youngest participant, one of the few women, and was eager to pr... 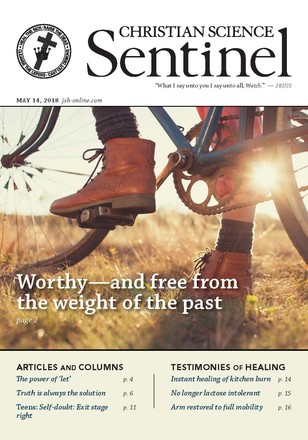 Worthy—and free from the weight of the past

The power of ‘let’

Truth is always the solution

‘I wanted to serve God’

By Benjamim Pilipili Vonga | May 2018

Black and white? Or brothers?

‘Grateful for all the good’