In Science and Health with Key to the Scriptures, the Christian Science textbook, Mary Baker Eddy writes, “Eternal Truth is changing the universe” (p. 255). Divine Truth, which, in accord with the Bible, she designated as a synonym for God, is forever unfolding humanity’s noble destiny—the freedom that comes when individuals learn of their true, spiritual identity—and guiding every step of human progress in demonstrating Truth’s healing power.

One area undergoing great change is how people perceive the role and position of women in society. Around the globe we have seen the extension of women’s voting rights, increased access to education, and the lessening of discrimination toward women—all of which, thankfully, have brought to light more of women’s God-given capabilities and have blessed entire nations with greater peace and prosperity. These signs of progress are tangible proofs of the leavening influence of Truth­­­ on human thought.

But as current events show, many fields of human life still remain ripe for harvest­—for the healing of problems related to gender stereotypes and biases. For lasting progress that benefits all, the world needs what Truth alone brings to light: a deeper understanding of the nature of God as infinite Spirit and of each individual’s inherent worth and ability as God’s image and likeness.

The Apostle Paul said, “Be not conformed to this world: but be ye transformed by the renewing of your mind, that ye may prove what is that good, and acceptable, and perfect, will of God” (Romans 12:2). As Paul himself experienced, such transformation often involves a struggle. Rigid patterns of thought and the outward evidence of the material senses would insist that we’re defined and limited by physical gender or organic matter. But consecrated prayer and the willingness to understand and yield to Truth transforms thought,­ enabling us to exchange the material, sensual concept of identity for the spiritual and only true concept, in which we understand true womanhood­—and manhood­—as the pure reflection of Spirit, the one Father-Mother God.

Faced with many uncertainties, including how I would sell a family business, I could have risen up and asserted myself as a “strong female.”

When those mental breakthroughs come, it shows that divine Truth is dawning on human consciousness with the spiritual light that dispels any sense of loss or limitation. The eternal Christ, the spirit of Truth that Jesus manifested, reveals to every receptive heart that woman has never lost any love, justice, or worth. Nothing can rob her of the eternal and spiritual qualities that constitute her real individuality. She is forever complete in God’s eyes. Wise and strong, she includes every right idea and talent gifted to her by her heavenly Parent, the divine Mind.

While my study of Christian Science has helped me to better understand that all real identity is spiritual and complete, it wasn’t until my husband of nearly thirty years suddenly passed away that my sense of womanhood and identity took on a much deeper and richer tone.

Though I consider myself a fairly confident person, at times I felt blindsided by some of the challenges of managing on my own without my former life-partner around. Faced with many uncertainties, including how I would sell a family business, I could have risen up and asserted myself as a “strong female.” As a student at a prominent women’s college many years ago, I came to appreciate the capacities and amazing accomplishments of women. But when confronted with these unexpected circumstances, I found that it wasn’t enough to know intellectually that I was capable of coping. Human reasoning could not release me from recurring feelings of inadequacy, grief, and limitation.

At the time, Paul’s counsel to “be not conformed to this world: but be ye transformed by the renewing of your mind” seemed especially relevant. To me, it signaled that I should watch my thinking and actively reject any tempting thoughts of inadequacy or timidity. This was helpful, certainly. But the deeper need was for transformation. I needed to develop a broader, clearer view of myself as not a female mortal at all (doing things well or not so well), but rather an already complete, wholly good and capable, immortal image of Spirit, God, the source of every good quality.

Over the course of about three years, I studied the Bible and Science and Health and prayed with the truths I’d learned in Christian Science. That strengthened my trust in God’s presence and power, and I learned additional precious spiritual lessons. I even kept a journal about my new spiritual discoveries as God’s daughter, the child of His care.

As I took on all the financial affairs, car and home maintenance, dealing with contractors and bankers, as well as pursuing my career, I discovered more evidence of my native, God-given qualities of courage, perception, resolve, and decisiveness. Through many little victories along the way, I began to see more clearly how men and women share equally in the ability to reflect God’s government and wisdom. It doesn’t derive at all from gender or from human will, but from the spiritual understanding of our oneness with God, the divine Mind, as His spiritual manifestation. Solutions to problems came through spiritual growth and understanding, not through mere human reasoning that women are equal with men.

One particular Bible story held great meaning for me. After Christ Jesus had been crucified, some of his disciples returned dejectedly to their fishing career. One morning, after laboring in vain all night, they saw Jesus on the shore and heard his call: “Cast the net on the right side of the ship, and ye shall find” (John 21: 6). When they did, the net overflowed with fish! Mary Baker Eddy describes it this way in Science and Health: “Through all the disciples experienced, they became more spiritual and understood better what the Master had taught. His resurrection was also their resurrection. It helped them to raise themselves and others from spiritual dulness and blind belief in God into the perception of infinite possibilities” (p. 34).

Solutions to problems came through spiritual growth and understanding, not through mere human reasoning that women are equal with men.

In my prayers, I was reaching forward mentally to discern more of the unlimited capacities and possibilities of my true being as God’s spiritual idea. This broader understanding I knew was the result of the Christ, Truth, coming to my thought in a fuller sense. Christ, the true idea of being, represents true manhood and womanhood and manifests all the qualities of God, whether they are seen as masculine or feminine. Gentleness, spiritual acumen, assurance, competence—these qualities of true identity go beyond physicality or dependence on gender for their expression. True womanhood, as well as manhood, reflects the entirety of God’s perfect and immortal nature. Nothing more can be added to it, for perfection is God’s standard. As Mrs. Eddy explains in Science and Health: “God is the creator of man, and, the divine Principle of man remaining perfect, the divine idea or reflection, man, remains perfect” (p. 470).

During all this time, I came to appreciate even more the fact that Christian Science was discovered by a woman, Mary Baker Eddy. Over one hundred years ago, she wrote, “This is woman’s hour, with all its sweet amenities and its moral and religious reforms” (No and Yes, p. 45). This certainly applies to her role as the Discoverer of Christian Science, the system of Christian healing she saw as central to the uplifting of humanity. She overcame incredible obstacles to accomplish all that she did.

But I have come to feel that her phrase “this is woman’s hour” speaks specifically to the spiritual concept of womanhood embodied in the teachings of Christian Science—a beatific purity of thought leading humanity up and out of matter-based beliefs and uncharitable biases. It is a view that all real being is in and of Spirit—that health, harmony, security, strength, wisdom, and ability are spiritual, derived from God, and native to everyone as God’s reflection. This divine revelation gave wing to Mrs. Eddy’s achievements and her ability to heal—and enabled her to found a church dedicated to healing and helping mankind.

In divine Science, neither male nor female dominates the other. There are no “second-tier” offspring of divine Love, since God manifests Himself (or Herself) impartially through all His offspring. Though we rejoice in every step of progress for women, greater fruits will come about for everyone as we strive to understand and better demonstrate the spiritual fact that the true identity of each woman and man, as God’s spiritual creation, has forever been whole, complete, and blessed. All of God’s immortal, beloved children possess amazing capacities for good because they reflect the wondrous fullness of the divine Mind. 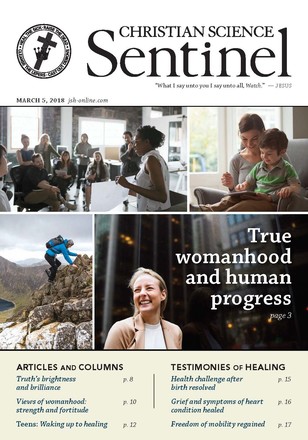 The importance of admitting the facts of divine Science

Views of womanhood: strength and fortitude

Waking up to healing

'When Christ changes a belief ...'

One Father-Mother God: foundation for progress and equality