I was playing capture the flag at camp when I fell and injured my knee. I couldn’t walk. I was terrified; nothing like this had ever happened to me before. I had never needed to rely on Christian Science for something this “big” before.

My brother was very helpful and shared an article with me from The Christian Science Journal (March 1928). It was called “ ‘Nor the smell of fire’ ” by Vera E. Barndollar, and reading it brought me some comfort. The article talks about the story of Shadrach, Meshach, and Abednego in the Bible and the way they emerged completely untouched, without even the smell of fire on them, after being thrown into the fiery furnace. The author makes the point that the “smell of fire” can be seen as the belief that something awful happened to us, and that an understanding of God’s presence and power helps remove any lingering belief that we’ve been through something difficult or painful.

The article helped me realize that, by accepting this injury, I was accepting the suggestion that there was a singular moment when I was outside of God’s protection. Knowing my oneness with God and that there never was a moment when I had been separated from God, meant I didn’t have to try to heal the effects from an injury. In reality, there was no injury to heal, since nothing bad had occurred. There was no “smell of fire”!

As I prayed with this idea throughout the week, I steadily improved to the point where I could fully participate in camp activities again. This was great—until I fell on my knee again, and it seemed like all the work I had done the week before was undone in an instant.

I got even more frustrated, since earlier that morning in Sunday School I’d been so excited about the amount of progress I had made. I was talking to my younger sister about my disappointment, when she shared the story from the book of Genesis about Jacob wrestling with an angel. At dawn the angel declares, “Let me go, for the day breaketh.” To which Jacob responds, “I will not let thee go, except thou bless me” (Genesis 32:26).

Refusing to accept what the physical senses were telling me­ was the key to healing.

As I thought about this story, I realized that I wanted to be done with this knee problem so badly that I hadn’t stopped to consider the blessings all my prayers and “wrestling” had brought me. I could see that those blessings included the opportunity to dig deeper into what I’d been learning in Sunday School and to witness how effective the healing power of divine Love really is. My frustration evaporated, and I continued praying and feeling grateful for what I was understanding through my prayers.

Less than a week later, I was able to walk freely and enjoy all my normal activities, including a dance kickline that I’d been unsure if I would be able to participate in again. Things were looking up, and I left that camp to attend a sports camp for dance. I was very excited, especially since I’d been worried that this knee injury could interfere with my ability to dance.

Everything was going fine until one afternoon, while doing a turn, I fell onto the same knee. I felt a surge of extreme annoyance that all the prayerful work I’d been doing had, once again, been undone in an instant. I left dance rehearsal struggling to walk and struggling to know what to do. I went over all the ideas that had helped me before but felt uninspired and stuck in the problem.

I was flipping through the Bible, as well as Science and Health with Key to the Scriptures and other writings by Mary Baker Eddy, looking for anything that could help me, when I came across this question addressed in Mrs. Eddy’s book Unity of Good: “Is anything real of which the physical senses are cognizant?” I started to read Mrs. Eddy’s answer and was blown away by the first sentence: “Everything is as real as you make it, and no more so” (p. 8).

In an instant, I realized what my mistake was! I was accepting this knee injury as real because of what the five physical senses were telling me. They were saying that there had been an injury and that I had to experience its effects (the “smell of fire”). I saw that refusing to accept what the physical senses were telling me­—because it wasn’t based in God, and therefore must be untrue—was the key to healing.

When I finally said “no” to what my knee was telling me and accepted that I had always been safe in God’s care, all the pain disappeared and didn’t come back. In spite of having struggled with this problem three times, I’m now able to walk and dance freely and to know that I was completely untouched by any suggestion of an accident.

This article is included in:
2018 - SPECIAL EDITION

A Collection for Teens - January–June 2018 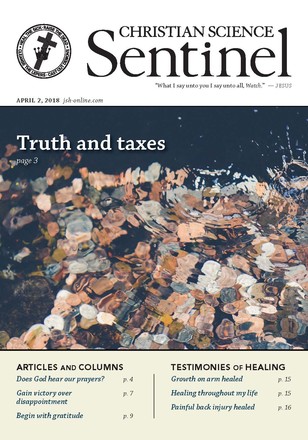 Why should a young person read a Journal, Sentinel, or Herald article?

Does God hear our prayers?

‘Dear God, what is the standard?’

No ‘smell of fire’

Healing throughout my life

Healed of stiffness and difficulty moving

'Where streams of living water flow ...'