Those of you who are avid readers of the “For Teens” section of the Sentinel may remember my article from eighth grade about the school play, Bye Bye Birdie. Now, two years later, I have been blessed with another great learning experience on the same stage!

This year, my high school put on a production of Footloose: The Musical, a dance-intensive musical based on the well-known movie starring Kevin Bacon. (The 2011 remake is in theaters now, too!) I was cast as Urleen, a friend of the leading lady, Ariel. Throughout the preparation process, I grew to love our cast, especially the other leading girls. I had to overcome many obstacles (such as having minimal dancing skills in a show about dancing!) but by opening night, the show flowed harmoniously. There were four performances (Thursday, Friday, Saturday matinee, and Saturday evening), which I was to split with my double.

Thursday was my off night, so I played an ensemble role. I had learned so much with my experience from Bye Bye Birdie that I felt prepared to confront any suggestions of fear or disappointment, as I knew that I was performing simply to glorify God, not myself or the other cast members. As a result, I felt more calm and collected than I’d ever felt on stage. The show was a success, and I left the auditorium that night looking forward to my debut as Urleen the next day.

It was a windy day, and my horse, Chicky, was getting antsy from all the rustling trees and fence lines. At one point, as I was preparing to head back inside, Chicky spooked and jumped away from something she saw out of the corner of her eye. The spook wasn’t violent, but I lost my balance and fell. When I hit the ground the first thought that came to me was, “There is no love but God’s love, no truth but God’s truth.” I’d had healings in Christian Science before, so it was natural for me to immediately reach out in prayer. I declared what was true—that I was safe and unfallen—before anything else.

I then realized that I couldn’t move my hip. I had my phone with me, and quickly called my mom. She immediately came to help me, and also made sure that Chicky hadn’t run away. Then it hit me: “I have to be ‘footloose’ in half an hour!”

The healing was to let God be manifested, not to have my time in the spotlight.

My Christian Scientist friend and mentor, Clementine, lives next door and quickly came out to the field to support me as well. Rather than giving me the wave of pity I was expecting, however, the first thing Clementine asked me was, “How can you love more right now?” This caught me totally off guard, and reminded me of the fact that no matter where I was, whether it was on horseback, on stage, or on the ground, I was still expressing God. So the question was no longer, “Is God here?” but “How do I express Him to my fullest capacity?” Clementine and I began to list off expressions of God right there, such as the beautiful day that was bringing joy to so many people after a long winter.

At first, I was extremely sad. I felt as if I was owed the performance after all my hard work. After some tears and a little of Clementine’s homemade custard, I realized that this experience was an opportunity to express God through humility. After all, couldn’t I glorify God both on stage and off? This realization was empowering. The healing was just to let God be manifested, not to make myself seem greater or have my time in the spotlight.

The next day, I attended the matinee with my walker. With increasing mobility, I happily sang backstage with a microphone, soaking in the love and enthusiasm that the cast was expressing on and off stage. On my way home, the thought occurred to me to do the closing show. I’d been gaining confidence in my prayers with the practitioner and making steady progress that day, and this thought felt like a turning point. Immediately, I went to my room and started practicing some of the choreography. I could do some of the easier steps, so I called my director and asked him if I could do Urleen, but opt out of the larger, more dance-intensive ensemble pieces. He said yes, so I happily got ready for the evening performance, thinking that I would hide my limp on stage, then stand with my walker off stage.

I skipped the opening number of the show, but as the show progressed, I continued to pray to know that I had the freedom to express God in whatever way felt right. I got increasingly confident on my feet. I felt like the actor Mary Baker Eddy talks about in Science and Health who “was so lame that he hobbled every day to the theatre,” but “was accustomed night after night to go upon the stage and sustain his appointed task, walking about as actively as the youngest member of the company” (p. 261). Each scene was a huge accomplishment, and each time I came off the stage, I was ecstatic just to be in the play. My supportive double, who had been covering for me during my absence, helped me through every costume change, and encouraged me to not hold myself back. By the end of the play, I had only opted out of the first number. I had climbed scaffolding, done pushups, jumping jacks, and kicks as comfortably and enthusiastically as the rest of the cast. And let me tell you, never before have I been so extremely grateful to be doing pushups.

This experience taught me a lot about how I could never stop expressing God, and that getting myself and my concerns out of the way allows me to do that. I am immensely grateful for this healing, and look forward to future lessons from the stage.

Robiny Jamerson is a junior in high school. Besides performing in musicals, she loves taking pictures and playing soccer. 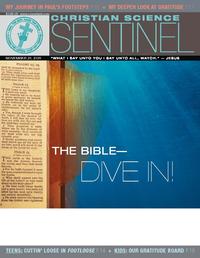