The day I rewrote my life

IT STARTED LIKE ANY OTHER DAY. I woke up and started praying. This day was different, however. Instead of inspiration, scenes of my childhood paraded through my thought. It was totally uncharacteristic of me to look back. I needed to get on with today. But, I couldn't find the OFF button!

As the flashbacks continued to unreel, I began to wonder what this meant. I had been praying to accept God as the only influence in my life. These recollections were of myself as a child, whose development had been according to happenstance, the influence of teachers, parents, and friends—even birth order and a bloodline. Could prayer be bringing something out in the open that needed healing? I decided to go with it and see.

Now, understand that my childhood was a happy one. Evidently, what I was coming to terms with was that, if I perceived myself as anything other than God's own spiritual likeness—even as a fortunate mortal—then I was on shaky ground. Unless I "rewrote" my childhood according to spiritual reality—that is, God's influence—I would be accepting influences that were not legitimate. What is not of God, who is completely good, is not legitimate.

Magazines tell us that we are destined to live out the "defining moments" of our past, and that these determine how we perceive ourselves.

Were the defining moments of my life material or spiritual? Did they involve good and bad human events—or did they start and end with God? The choice was mine.

I saw that I didn't have to undergo self-analysis or undo anything from my childhood. I just needed to stand for what was actual, spiritually speaking—what God had caused. So, as each memory presented itself, I put it to the test of Truth—the test of God. The question was this: Was what I was remembering the effect of God's good influence shining in my life? If I determined that something was an indication of God's presence, I kept it as part of my history. If I determined it wasn't, I deleted it, just as I delete paragraphs on the computer when they aren't worthy or useful when I'm writing.

For instance, I kept my family's love as part of my life. It was a direct reflection of God's love for me. But, I deleted the agony of learning long division at the hand of a less-than-patient coach. Again, whatever memory came to thought, I put it to the test. If it didn't honor God as being All, I deleted it. Highlight and delete. Highlight and delete.

I made a lot of progress that day in understanding God as the only cause of existence. It was several weeks, however, before I grasped the magnitude of what had happened.

Some 20 years earlier, I had made a mental list of five traits I wished to drop off. One was severe procrastination. (And no, I'm not going to name the rest!) Ever since, I'd kept track of my progress. Shortly before that morning of the flashbacks, I'd noted that, even after all those years of prayer and effort to be free, I was still, to some degree, struggling with all five of those character traits. They were things that just seemed to be part of my nature. In discouragement, I'd prayed some more to be finished with those particular issues so that I could move on to areas of life where I needed to grow.

Suddenly I saw it: This was what that morning had been about. It felt like an answer to all my prayer, because I realized that since that time, I hadn't had even the slightest struggle with procrastination or the other bad traits. They were simply gone, all at once. I could hardly believe it!

What had happened? I'm not completely sure. I can only figure that during that morning of spiritually "rewriting my autobiography," my predisposition to those particular fallibilities simply got deleted. I don't know—or feel I need to know—why it was. It is enough to know that they had never been true of me as God's likeness. No more seen as a legitimate part of my past, they had no influence on my present.

If you are struggling with some unwanted trait that seems so much a part of you that you can't seem to leave it behind, think how my experience might apply to you. No matter how severe your past, no matter how dire your sins, no matter what mistakes you've made—you can start fresh today. Scripture calls it "putting off the old for the new."

You may not have exactly the same kind of experience I had, but your need will be met. Mary Baker Eddy, the founder of this magazine, wrote in her autobiography Retrospection and Introspection that "the human history needs to be revised, and the material record expunged" (p. 22). In one way or another, we will each rewrite our life according to God's perfect plan. Fully finding ourselves to be God's likeness is our lifework. 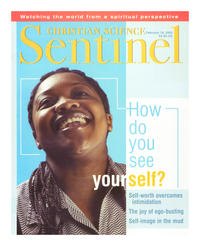