A way out of drug addiction

David Fowler spoke with Sentinel Audio Producer Rita Polatin for the podcast series titled “News of Healing” on JSH-Online.com. He shared this story of how he was healed of drug addiction. It has been edited for publication.

In the middle 1960s , I began to smoke and drink socially with friends on the weekends. Soon after this I began to take drugs. At this time, I was living close to San Francisco, and I began to go to dance halls such as the Fillmore and the Avalon Ballroom where you would hear really great musicians.

That was right at the time when there was a lot of psychedelic music, and I began to take drugs such as LSD, psilocybin, and mescaline because I thought of this as the fast track to enlightenment. I also began to play the drums, which I had played earlier in my life, and eventually I joined a very, very good band that played with some top acts.

So at a young age, I was playing on the stage with The Jefferson Airplane and The Grateful Dead, the Sons of Champlin. And I was taking lots and lots of drugs. In fact, at one point I estimated I had taken LSD well over 350 times. I was also taking crystal meth—a dangerous drug that had a very negative physical effect on my heart and nervous system.

I didn’t really have a purpose in my life, and the drug-taking kind of filled a void. My life was sort of like a big, deep, dry, empty well. I wasn’t contributing anything positive to anyone. I was doing mostly a lot of taking, and I think that characterized my life. The more I took, the more I wanted to take, and it just kind of kept spiraling downward.

Then I got a call from the Army’s Draft Board, and reported there. During the physical exam the doctor listening to my heart literally jumped back, as if he was in shock. Then he put the stethoscope on me in different places with a very concerned look on his face.

The next thing I knew, he brought another doctor over, and he listened too. Then they conferred, and one of the doctors came to me and very sadly said, “Son, we don’t even know how you’re standing here alive.” They basically said that I didn’t have very long to live and then dismissed me.

After that, I went back to my crazy life, taking more drugs and playing music. A couple of weeks later, after a big concert, I invited some friends to come back to my house at two or three in the morning. We were going to have a drug and alcohol party.

Somebody came with a large jug of wine, and I asked everybody to put all their drugs into the jug. Then I took the wine and started drinking. In less than one minute, I was on the floor, almost like in seizures. I was in the greatest pain I have ever experienced in my life. It wasn’t just the physical pain—it was this intense mental pain.

I learned that I could trust God—that God was as near as thought.

All of the friends scurried away without helping me. But I managed to crawl out to the backyard. This was about three in the morning. I then saw the ground open up. It was like a grave, and I knew I was in very, very serious trouble at that point.

Something deep inside of me started to call out for God. I was screaming, “If there is a God, I need Your help.” I screamed that three times—that was my prayer. I also said, very quietly, “I will change my life.”

I realize now that 110 percent of my heart was in that desire to change my life. I didn’t know what I was going to become, but I did know that I was not going to live the life that I had lived before.

I wasn’t afraid of dying, but I was afraid of not knowing who God was, and who I was in relation to God—that was my biggest fear. After I had said to God that I would change my life, I heard a most wonderful voice, which said, “Go into the house, and get into bed.”

I at first thought, “That’s an unusual request,” but it wasn’t a request—it was a command. I’ve since learned that when God speaks, it’s really a command—it’s actually already done—it’s a finished, accomplished fact. It’s not like a human conversation. So, when I heard God’s voice, it was as if the instructions were going to get carried out.

There I was, writhing in pain, still high as a kite, crawling across the yard into the house. I got into bed, and then a most miraculous thing happened. I fell asleep! And it was not just any sleep, it was very, very peaceful.

I don’t know if you know anything about drug addicts, but they are not known for sleeping calmly and peacefully during the night. So, that in itself was quite wonderful. The next morning I woke up to the phone ringing. It was my mother. We had not had a meaningful conversation in a long time. I had separated myself from my parents and my family.

She said, “I feel that you’re in trouble and need help.” I said, “That’s exactly right; I do need help.” She said she knew a Christian Science practitioner I could call if I wanted to, and I said, “That’s what I want.” I didn’t really know what a Christian Science practitioner was. But I did know that when my mother said that I could meet with this practitioner, that was absolutely part of the command—God’s command—and that’s what I wanted to do.

My mother gave me the phone number, and I called immediately. I visited the practitioner that day. Her office was within walking distance, and when I got there I told her, “I would like to know who is God and what is my relationship to Him.” She said, “Sit down,” and I took a seat, and we chatted for a few minutes, and then she read a couple of quotes to me out of the Bible.

The most amazing thing happened to me when she read those quotes. I don’t remember what they were, but I could feel them inside of me, as if they were lighting up. I absolutely knew that what she was reading was a fact. She gave me a Sentinel to read and she said, “You read; I’ll pray.” So, I sat there, and I did my best to read. She was very quiet for about 20 minutes. I remember that it was very much like being bathed in warm water—the prayer sensation at that time.

After the 20 minutes were over, I said, “Can I come back tomorrow?” She said, “Of course,” and when I left her office that day, I noticed there was a different spring in my step. Something had shifted dramatically. I didn’t know exactly what it was, but I knew something had shifted. I also knew that I no longer had any desire for drugs. It was completely wiped out.

At that point, I did not understand what was going on. All I knew was that this felt good, it was right, and I wanted to stay in this presence until I really, truly felt for myself who God is and understood my relationship to Him. That was really what my prayer was.

The practitioner never asked me about the physical conditions, and I didn’t even think to tell her about them or that I was an addict. In fact, until later on, I didn’t realize that there was a connection between my moral temperature and my body. As I became purer, meaning closer to God, the physical just became more in alignment with God. I visited her for five days in a row, and after each visit, I would come out of her office with some physical aspect of me healed—whether it was eyesight, or hearing, or my heartbeat, or the drug addiction,
but at the end of five days, I was literally a brand new person.

The answer to my questions about God came to me as a really firm realization that God was right where I was, and that God was taking care of me. That was how simple it was. I learned that I could trust God—that God was as near as thought.

I remember that the practitioner asked me if I wanted to go to church. Of course I did. The next Sunday I met people, and the next thing I knew, somebody had invited me to live in a house for someone who needed a house sitter. So, I was given a house to live in rent free for a year. I was accepted at a very fine art school, where there were 500 people competing for one position, and I was accepted. Not only was I accepted, but somebody gave me a scholarship.

I reconnected with my parents, and in fact, when I told them I was having class instruction, they just about fell over.

It was a wonderful healing on a lot of different fronts—I forgave myself for a lot of things, and I also changed how and what I was going to do in my life. I became involved in working with severely disturbed juveniles. My experiences were a very big help to the kids that we had in our program. So, it was not just a healing for me; it had a ripple effect and went out and helped a lot of people. 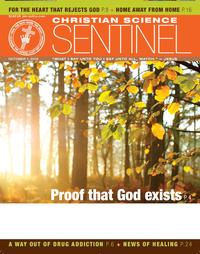