Last year, as a junior in high school, I learned a big lesson in humbly trusting God to lead me where I need to be. As I prayed to know that God was constantly preparing me for my next step, I was guided to a summer internship working at a Christian Science nursing facility in Los Angeles, where I took steps forward in spiritual growth.

That summer I lived with my grandmother and did a lot on my own, including playing water polo after work and driving in unfamiliar areas. I often prayed with this idea from Proverbs 3:5, 6: “Trust in the Lord with all your heart, and do not lean on your own understanding. In all your ways acknowledge him, and he will make straight your paths” (English Standard Version).

To me this meant that trusting in the Lord keeps human will in check and leads only to good. This comforted me throughout my summer, lifting burdens from off my shoulders as I realized more fully that a loving God would never allow His children to be burdened. I discovered that trusting the Divine, trusting God’s infinite and wise nature, was about learning to let go of self-will, which was sometimes easier said than done.

One day during one of my busiest weeks yet of long work days, a full water polo training schedule, and little time off to relax, I discovered that my phone was almost dead, and I didn’t have my charger. I regularly used the maps app on my phone when traveling, but thought I’d driven the routes often enough to remember without it. I texted my grandmother, telling her that my phone might die, but also reassuring her that I knew the way home and that I’d be home before 9:00 p.m.

After a great swimming workout I started my journey home. All of the streets were familiar, and I remember feeling happy that I was able to navigate the long drive all by myself. Somewhere along the road, however, I made a wrong turn. I kept going, until eventually I didn’t know where I was or how to get home. I’ll figure it out, I kept thinking, as I continued to drive aimlessly. Hours later I was still lost in a sprawling city.

I remembered my mom telling me that she often prays by asking what she needs to learn from God to help her. I knew this was the angel message that would guide me.

It was now after midnight, and at a red light I said aloud to God, “What do I need to learn?”

The light turned green, and I immediately thought of the word humble. What did that mean? What did it mean right then and there? It meant to stop forcing myself, through human will, to manufacture a plan. It meant to stop trying to prove to myself how good at directions I can be. I needed to stop thinking that if I use willpower, if I’m stubborn long enough, I will get what I want. There is no human will in God’s kingdom; divine Principle has the right plan, and any need I have will be met through relying on God. These were the things I needed to hear.

At the next right turn was a store I knew would sell chargers. It was open, and I scrounged some change from my car and my purse so I could buy one. After some searching in the store (and some frustration!), I was able to calmly find something that worked and plugged my phone in. The maps function on my recharged phone helped lead me back home.

This experience was a turning point for me because I learned how to give up on what I think I want, rely on God to guide me as my Shepherd, and yield to the right plan.

I realize now that I was practicing listening to God’s ever-present angels. When I was uncomfortable and had nothing else to guide me, that’s when I grew spiritually. Psalms 34:10 has this to say about false pride: “The young lions suffer want and hunger; but those who seek the Lord lack no good thing” (English Standard Version). God led me to where I needed to be, and all I had to do was listen. 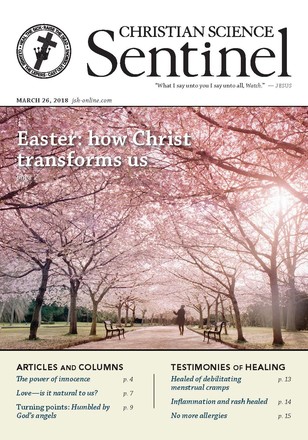 Easter: how Christ transforms us

The power of innocence

God’s mercy when you’re in over your head

Love—is it natural to us?

Lost in Los Angeles and humbled by God’s angels

Getting up close with the criminal justice system

By The Monitor’s Editorial Board | March 2018