In the early days of my interest in Christian Science, I was puzzled by what seemed to me to be a contradictory stance in Mary Baker Eddy’s writings concerning when metaphysical treatments should be given. Throughout Science and Health with Key to the Scriptures, she shares the revelation as to how to heal. She encourages, directs, and admonishes us to follow Jesus’ example, including his command to heal the sick (see, for example, Science and Health, p. 37). However, in an article titled “Obtrusive Mental Healing” in Miscellaneous Writings 1883–1896, she says, “The question will present itself: Shall people be treated mentally without their knowledge or consent?” and she continues, “The direct rule for practice of Christian Science is the Golden Rule, ‘As ye would that men should do to you, do ye.’ Who of us would have our houses broken open or our locks picked? And much less would we have our minds tampered with” (p. 282).

While I recognized the wisdom of not tampering with other minds, I simply did not understand how a metaphysical treatment could be done without intruding on someone else’s thoughts. Often problems needing healing involve more than one person—or sometimes the problem seems to belong entirely to someone else. Did this mean I needed to get their permission to give a metaphysical treatment when I recognized a problem? And if they didn’t give me permission, did this mean the problem couldn’t be solved by Christian Science? If so, wouldn’t that be limiting God?

As usual, God provided an answer that I could understand. It happened like this.

I had been working as a substitute public school teacher. One day I received a call asking me to substitute for a middle-school math teacher for two days. Everything went fine until fifth period of the first day. As the students filed into the classroom, I noticed one rowdy boy had an ugly growth on his eye. It was so alarming I had a hard time looking him in the eye. Of course, the students picked up on my discomfort immediately and proceeded to make rude, crude jokes about it all class period. I tried to reason with the students that this was unkind to the young man, but the boy claimed he didn’t care and laughed as loud as the rest of them.

It doesn't matter if the whole world thinks they see it; I can't see it because it's not there.

I went home that evening stressed and disturbed. I even thought about asking the principal to find someone else to substitute for the next day. Then I realized I needed to give myself a metaphysical treatment. This situation was trying to rob me of my peace and joy, and my rightful employment. So I began to reason that God made me in His image, and that feeling upset or fearful was no part of His plan for me. As I prayed, I felt calm and knew I could go to school the next day.

I was ready to move on with my evening when this mocking thought came to me: “Well, now you have just given yourself a great treatment—but what are you going to do tomorrow when you see that boy with the growth on his eye?”

The next day, the boy was absent from class and I thought this was God’s way of taking care of the situation (so that I wouldn’t have to see or think about the growth on the boy’s eye). But I didn’t know how well God had taken care of it until about two weeks later. I was again called to substitute for a week, this time for a Spanish teacher. The first day, right before third period, a young man came into the classroom and stood by the teacher’s desk. I smiled and said hello.

Normally the student would have moved on to his desk. But this boy continued to stand close by as if I should say something else to him. I looked at him, but nothing about him looked familiar. It was almost time for the bell to ring, so I asked him, “May I help you?”

He replied, “Don’t you know me?” I looked him over again and shook my head “no.”

He then started giving me hints: “Oh, you know. I was in that fifth period math class, and we were so bad that day.” I told him: “I remember that class, but I don’t remember you. You must have been one of the quiet ones.”

He rolled his eyes at me and said, “I was the one with the growth on my eye.”

At first I thought: “He’s trying to pull my leg. This isn’t the same kid.” But when I looked at his eye, I saw a faint scar where the growth had been. I managed to stammer, “What happened?”

He said, “You remember, I wasn’t there the next day.”

“Well,” he continued, “the night before, the growth started to drain. So I went to the doctor the next day to see if everything was OK. By that time, it was gone and the doc said it was fine.” He went on to tell me that the doctor had previously told him there was nothing that could be done, and he would just have to learn to live with it. He told me how glad he was that it was gone.

For the rest of the week, this boy was an attentive student. In fact, if one of his friends started acting up he would turn around, look them in the eye, and say: “You need to be quiet. I want to hear what this teacher has to say.”

Naturally, I rejoice and thank God for these beautiful healings—both mine and the boy’s. However, most of all I thank God for showing me that what I thought were contradictions in Mrs. Eddy’s writings were not. I am grateful to understand better when, how, and for whom a treatment is to be given. At no time was I treating the boy—the metaphysical treatment was for myself. Regardless of what was in the boy’s thinking, I needed to see God’s goodness. I needed to feel peace and dominion, and I did. God provided it for me in a way that I will never forget, blessing both me and the student. 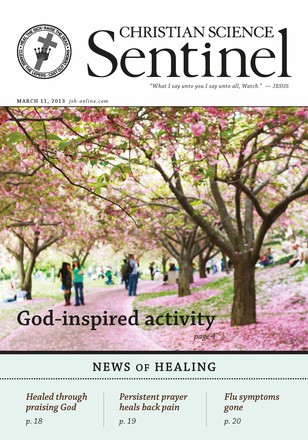 Can hoarding be healed?

'How many minds are there?'

It's the thought that counts

The way will open

By Van Driessen with contributions from Christine Driessen | March 2013

Lincoln and a lesson in liberty