IT'S WHAT WE ALL WANT: HEALTH THAT ISN'T IFFY, SHAKY, TOO SOON LOST—BUT CERTAIN, SECURE, ROCK-SOLID. NOT A PAUSE BETWEEN ILLNESSES, BUT A STEADY-STATE, SPIRITUAL REALITY OF OUR LIVES.

IF YOU COULD PREVENT A CHILD'S death by providing a mosquito net, who wouldn't want to do it? According to the United Nations Millennium Project report issued in January, dramatic improvements in people's lives can be achieved through relatively modest increases in aid from wealthy nations. Director Jeffrey Sachs said he is optimistic that the project's goals will be attained because people are generous and only need to be better informed in order to give in proportion to the need.

Philanthropy involves caring for people's immediate needs through generous giving. But many are realizing that lasting health is achieved and protected only through a deeper spiritual knowledge. Health is actually a divine right of all people. And this right is winnable through an understanding of Christ Jesus' spiritual teaching.

Jesus taught that all human needs are ultimately met through the understanding of God, and he proved this practically by healing the sick and feeding the hungry through spiritual power. The Founder of Christian Science, Mary Baker Eddy, made this penetrating comment: "The Scriptures say, 'Man shall not live by bread alone, but by every word that proceedeth out of the mouth of God,' showing that Truth is the actual life of man; but mankind objects to making this teaching practical" (Science and Health with Key to the Scriptures, p. 410). She was using man in the term's generic sense—representing all men and women.

Truth is the actual life of man—that's an idea vaster than a galaxy, and it begs for exploration. And explore it is exactly what Mary Baker Eddy did in her life-long effort to discover and practice Jesus' spiritual method of healing. In doing so she became one of the world's greatest advocates for the right to know oneself as the creation of Spirit, exempt from sin, disease, and death. This knowledge, she believed, was the divine Science of healing that everyone had the ability to learn and prove.

But mankind objects to making this teaching practical. Mrs. Eddy learned that Jesus wasn't just speaking figuratively when he described eternal life as the knowledge of God and of himself (see John 17:3). He demonstrated that knowing oneself to be God's spiritual and immortal likeness acts as the mental power that restores and maintains health now, and eventually overcomes death itself. This was the "bread of life" he offered to everyone who would accept it. Yet he also found that many were not willing to accept the demands of selfless spiritual living and let go of the view of themselves as material beings.

Spiritual self-knowledge is a fundamental human right—and the way to freedom. It's not surprising, then, that oppressors throughout history have promoted wrong concepts of identity. The slave industry asserted that slaves were subhuman. American civil rights activist James Lawson once said that the heart of racism is the idea that a man is not a man. Perpetrators of genocide in Germany, Cambodia, and Rwanda described their victims as insects. Sex-traffickers advertise women and children as mere objects of gratification.

SPIRITUAL SELF-KNOWLEDGE IS A FUNDAMENTAL HUMAN RIGHT—AND THE WAY TO FREEDOM.

But these lies can't deceive those who know the truth that God is the Life of all men and women. Better-informed people rise up to fight economic, racial, and gender-based injustice. Truth will also free the world from the injustice of disease, which builds on the view that humanity is sub-spiritual. To paraphrase James Lawson, the heart of disease is the idea that a man is less than God's spiritual likeness. Examples of people who are seeing through this deception and finding healing appear each week in the Sentinel. Such healings promise that the knowledge of oneself as spiritual is the way to consistent health, which Jesus demonstrated to the world.

The spirit of this promise includes the fact that those who seek this knowledge do so for spiritual, not just material, gain. Current research points to the health benefits of committed spiritual practice. Yet such practice can't be reduced to a means of just maintaining health, because health ultimately isn't material. Health is living in accord with all that is good. The purpose of spiritual practice is to get right with God, to gain the selfless love that many might agree is the most challenging and rewarding work on earth.

Problems that seem impossible to deal with through human effort alone often force people to move closer to God. I had a relationship at one time that caused me much anguish. I felt alternately imposed upon and guilty. I wanted to get right with God—to drop my own fears and desires, and love unselfishly. But I couldn't seem to do it. One day while I was out walking and worrying, I heard myself say, "This is a health issue."

The idea surprised me. Certainly resentment and guilt are elements of stress, considered to contribute to sickness. But in this instance, I felt the health issue referred solely to my mental state. I was aware of an explanation of health Mary Baker Eddy gave: "Health is the consciousness of the unreality of pain and disease; or, rather, the absolute consciousness of harmony and of nothing else" (Rudimental Divine Science, p. 11).

I knew my real need wasn't to relieve stress by changing the outward circumstances. It was to see that distress wasn't the reality, and that God's harmonious control of my life was. I needed to feel God's love for the other person as well as for me.

Yet while love is undoubtedly good medicine, I've learned I can't turn it on at will. Often the only way I can feel love in difficult situations is to identify myself spiritually—to accept the teaching that Truth and Love (and these are Biblical names for God) are my actual life and consciousness. In order to accept this, I've found I have to stop objecting to making this teaching practical by arguing that I can't or shouldn't have to rise above my personal desires or fears.

Many times during this troubled relationship I prayed simply to want to be right with God, which to me meant to love without self-interest. And I began to see that this prayer was empowered by the great fact that God's creation or likeness is right with God. No objection is stronger than this fact.

Over several years the relationship improved and the anguish disappeared. Far more important, I felt I learned something about subduing self-will and sticking with the spiritual knowledge of myself and others, even when troubles feel painfully real. Such experiences can encourage us to continue striving to make spiritual truth practical in the world as well as in our own lives.

Health is, finally, a spiritual issue, because it is a condition of our spiritual identity. By practicing selfless living, and holding to the knowledge Jesus gave that life is spiritual instead of material, we can be sure we are progressing toward the consistent health that is everyone's right.

Margaret Rogers is a contributing editor who lives in Greenbrae, California. 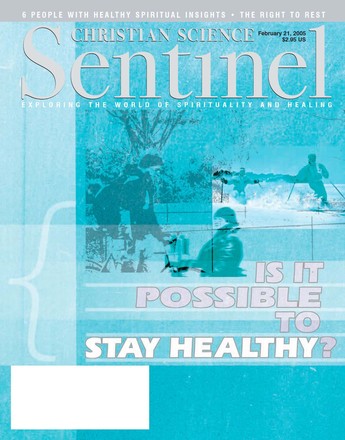 YOUR RIGHT TO CONSISTENT HEALTH

A WHOLE NEW VIEW OF WHOLENESS

By Andrew Wilson with contributions from Anita Wilson | February 2005

EMBRACING MY GLOBAL FAMILY WHEREVER I AM

To go with grace

LOVED FOR WHO WE ARE

I KNEW HEALING WAS POSSIBLE

FREEDOM FROM BACK PAIN

THE RIGHT TO REST